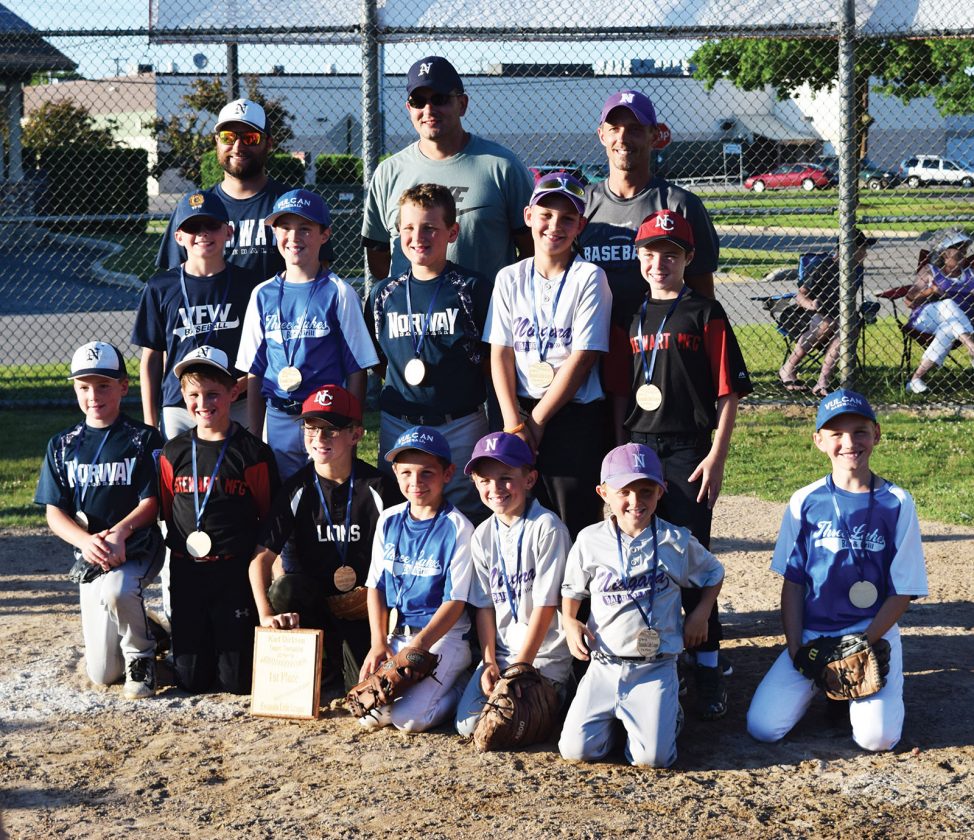 ESCANABA — After a day’s postponement due to weather, the Norway Minor Boys’ All-Stars (age 9-10) baseball team was awarded the Carl Dickson Yooper tournament title after its 19-13 win against Iron Mountain North here Tuesday.

Norway trailed 3-2 coming into the top of the third. Two hits and good base running put runners on second and third.

Norway’s Ayden Ponchaud took the opportunity to even the score with a single that scored Remi Buchanan. Shortly after, Kellan Amundson drove in Landon Ross and Ponchaud to give Norway a 5-3 lead. Kaleb Lapine snuck in on a passed ball, and Reed Schroeder connected to score Amundson and give Norway a 7-3 lead.

“(The game) was wild, to say the least,” Norway manager Kiel Ross said. “We did what we like to do. We like to put the pressure on the other team with a lot of small ball, bunting and stealing. We knew coming in that Iron Mountain was going to do the exact same thing we did. It was just a matter of who was going to execute it better, and we executed a little better than they did.”

Iron Mountain trimmed its deficit to 7-4 in the bottom of the third thanks to a single from Trenton Kramer that scored Kolbe Husin, but Norway added one in the fourth and another in the fifth to lead 9-4 entering the sixth.

Both teams ended the game with a slugging finale.

“The tournament was great,” Iron Mountain manager Brad Wender said. “There were some good teams here, the kids had fun and there was some great umping. Our kids really hit the ball well. We just fell apart in the field. They came back and kept trying though. It was a lot of fun to watch. We’re just proud of the kids.”

Norway more than doubled its score in its half of the sixth inning. Its final seven at-bats scored eight runs.

Iron Mountain refused to quit, cutting the deficit to 19-13.

“The last inning got a little crazy and a little tight to say the least, but Iron Mountain can do that,” Ross said. “We’ve seen these guys throughout league. Some of these kids play travel ball, so there was no secret in what anyone was going to do today.”