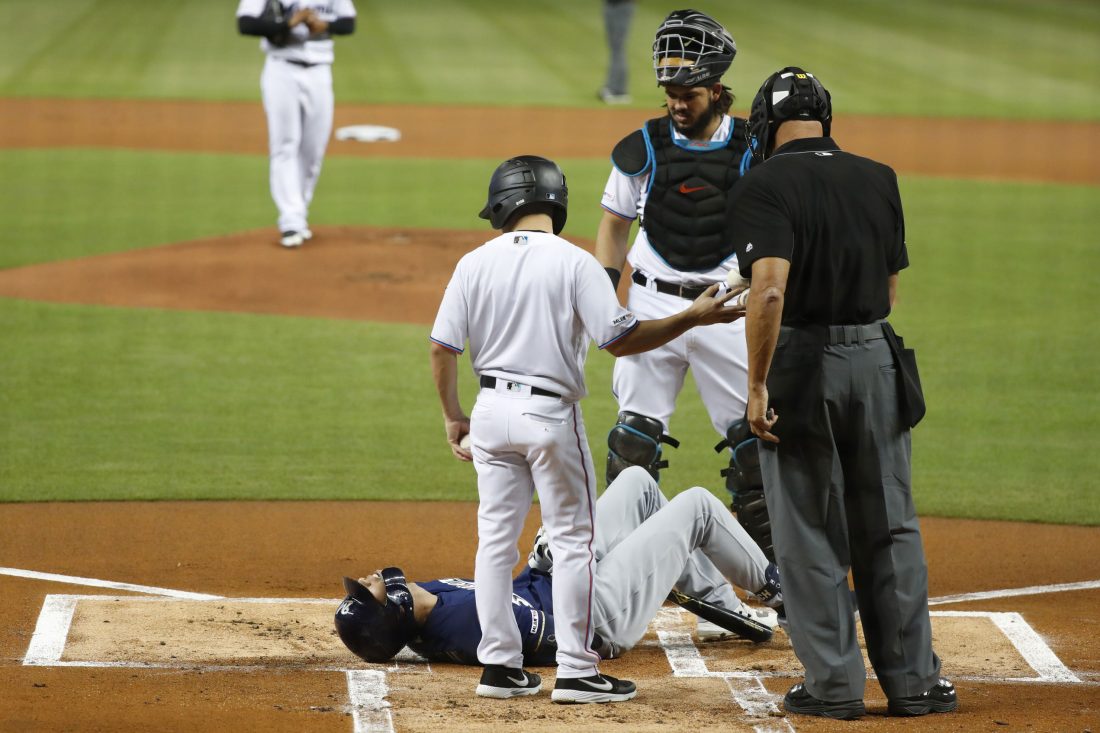 AP Photo Milwaukee’s Christian Yelich lies on the ground after an injury during an at-bat, as Miami Marlins catcher Jorge Alfaro, rear, home plate umpire Kerwin Danley and a bat boy stand next to him during the first inning Tuesday. Yelich broke his right kneecap on a foul ball and will miss the rest of the season.

Trying to catch up in the wild-card race, the Brewers instead saw the reigning NL MVP foul a ball off himself and go down with a broken right kneecap Tuesday night.

“We don’t have a definitive time frame other than we know he will be out the remainder of the season right now,” general manager David Stearns said after a 4-3 win over Miami. “We also don’t know if surgery is required.”

Yelich, who did not talk with reporters after the game, will travel to Milwaukee for additional tests on Wednesday.

The Brewers didn’t say whether Yelich might be able to return for the playoffs that begin Oct. 1 if they make it that far. Milwaukee, which won its fifth in a row, closed within one game of the Chicago Cubs for the second NL wild-card spot.

“I just heard. That’s not good,” Cubs manager Joe Maddon said after a 9-8 loss in 10 innings at San Diego. “Listen, I always want to beat other teams at their best, so that’s a tough one right there.”

Yelich fouled a ball off his leg in the first inning. He was down on the ground for several minutes before limping off the field.

Yelich hit .329 with 44 home runs and 97 RBIs along with 30 stolen bases this season. The outfielder was leading the majors in slugging percentage and OPS when he was hurt.

“We feel awful for Christian,” manager Craig Counsell said. “That’s the thing that resonates with me right now. He’s a special player and it’s a joy to watch him play every day. He’s the best at what he does. Not being able to see that every day is not good.”

The team learned the severity of his injury by the middle of the game.

“I went out there and his whole body was shaking,” Counsell said. “I was concerned and when he got up and went down the stairs I was optimistic. Then we got the bad news.”

It was 3-all when Yasmani Grandal led off the ninth with a single off Miami reliever Adam Conley (2-9) and advanced to third on Grisham’s double. Pinch-hitter Austin’s fly ball to medium center was deep enough to score Grandal.

Junior Guerra (9-5) got the win in two innings of relief while allowing Starlin Castro’s solo homer in the eighth that tied it at 3.