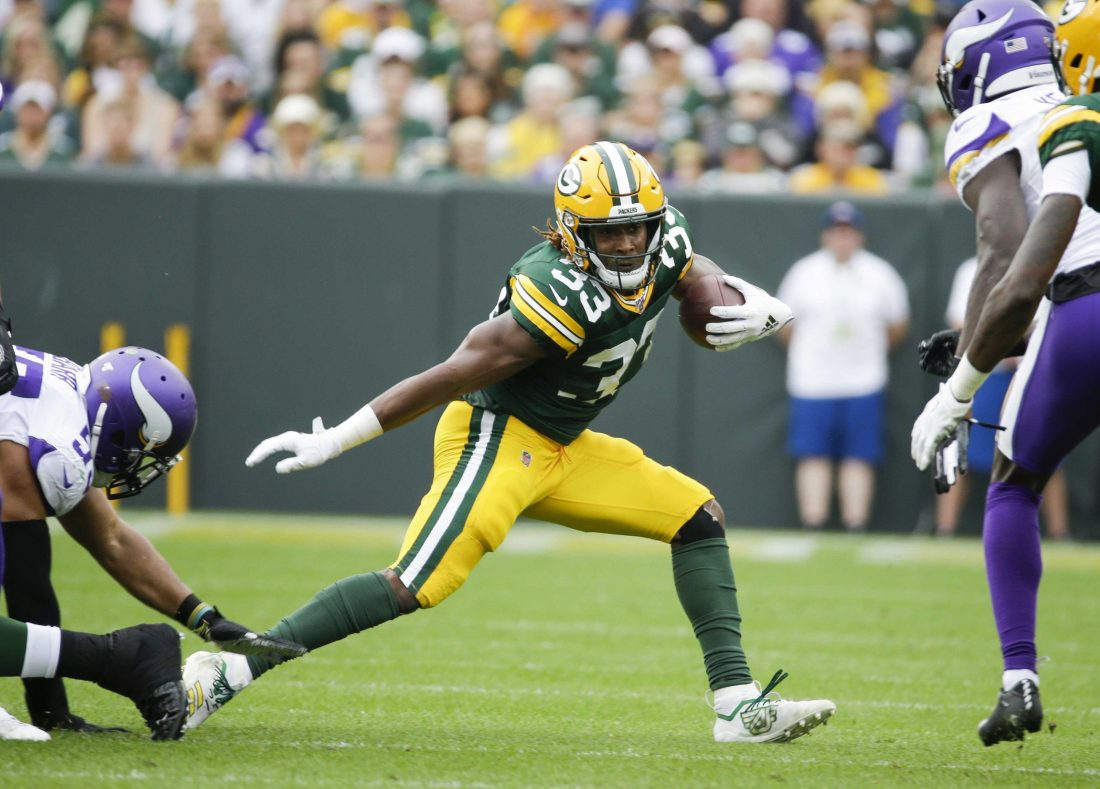 AP Photo Green Bay’s Aaron Jones runs during the first half against the Minnesota Vikings Sunday.

GREEN BAY, Wis. (AP) — What Aaron Jones did on Sunday is exactly what coach Matt LaFleur envisioned for the running game when he took over the reins of the Packers in January.

Jones had 116 yards and a touchdown on a career-high 23 carries in Green Bay’s 21-16 win over the Minnesota Vikings.

“He did an unbelievable job,” LaFleur said Monday of the third-year running back. “Matter of fact, he was our player of the game on offense. He did a great job. But I thought it really started up front, too. I thought our offensive line did a really nice job blocking for him.”

After totaling just 39 yards rushing at Chicago in the season opener, Jones eclipsed the 100-yard mark on the ground for the fourth time in his career and the first time since Week 10 of last season.

While the spotlight will be on LaFleur and Aaron Rodgers this season, LaFleur has maintained that in order for the offense to be as efficient and effective as he wants, the run game has to be established early and often.

Jones also had four catches for 34 yards, including a 15-yard gain on a grab with the Green Bay offense backed up to its end zone.

“Wins aren’t pretty in the NFL, but as long as you get that W in the win column, that’s all that matters,” Jones said.

The secret is out: The Packers have a really good defense.

The defense, for the second straight week, carried the team to victory. Coordinator Mike Pettine’s group forced four turnovers on Sunday and now has the NFL’s No. 2 scoring defense, behind only the Patriots. Green Bay has allowed 19 points through the first two games, its fewest through the first two weeks since 2001.

Safety Raven Greene (ankle) was placed on injured reserve on Monday. Greene was carted off the field on Sunday following the first play of the second half.

Green Bay will host the Broncos on Sunday. The Packers are 6-7-1 against Denver, which is 0-2 following a loss to the Raiders in their season opener and a last-second defeat against Chicago in Week 2.