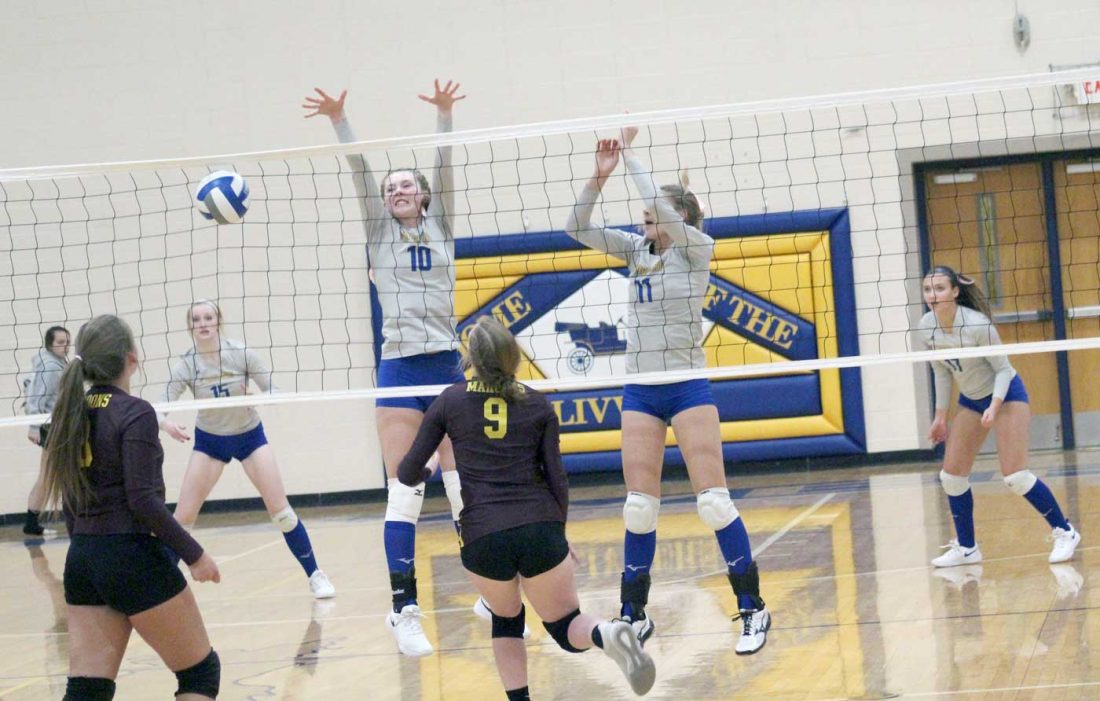 KINGSFORD — The Menominee Lady Maroons came out of the gates strong but Kingsford recovered and dominated the rest of the way, in a 3-1 (18-25, 25-14, 25-12, 25-9) Great Northern Conference volleyball victory Monday night in the Kingsford Middle School Gymnasium.

“We beat ourselves up in the first set, digging ourselves into a hole,” Kingsford head coach Jaclynn Kreider said. “They caught us off guard for sure. We refocused ourselves before set two, be more disciplined, communicate better and basically play like we know we’re capable of. Also having 15 aces in the match was the key throughout the night.”

The Flivvers’ serving was the difference after a first set loss. In set No. 2, Kali Dooley fired the Flivvers to a 15-5 lead with a five-point serving run. Menominee fought back, but to no avail.

Maggie Strehlow took her turn in the Flivvers serving rotation in the third set, fueling a 10-point run from the service line and helping her team to a 16-5 advantage to which Menominee had no answer.

Menominee couldn’t get anything going in the final set, which was dominated by the Flivvers. Lexi Roberge’s six-point serving run paced the Flivvers on their way.

Brooke Kriegl led the Flivvers with 18 digs and six aces. Three blocks for Kate Cook was also a team-high for the home team. Strehlow and Ali Doolittle led Kingsford with 10 kills each, while Roberge recorded a team-best 11 assists.

The first set was knotted 9-9 when Menominee went on a seven-point scoring run behind the serving of Makenzie Wellner. The scoring went back and forth for the next few points as the Maroons went on to win.

“We came out on fire, which is opposite of the way we usually start off. It gave us some optimism for the rest of the match, but it didn’t work out that way” said Menominee coach Sarah Betzinger. “They (Kingsford) are very strong at the net and even stronger servers. We’re going back to the drawing board at practice tomorrow, we’ve gotta get ourselves ready for the GNC Tournament on Saturday.”

Kingsford won both the JV and freshmen matches 2-0.

Kingsford hits the road Thursday for a conference matchup with the Gladstone Braves The Maroons host Bark River-Harris the same night in non-conference action.

Both teams head to Gladstone Saturday morning for the GNC Tournament.