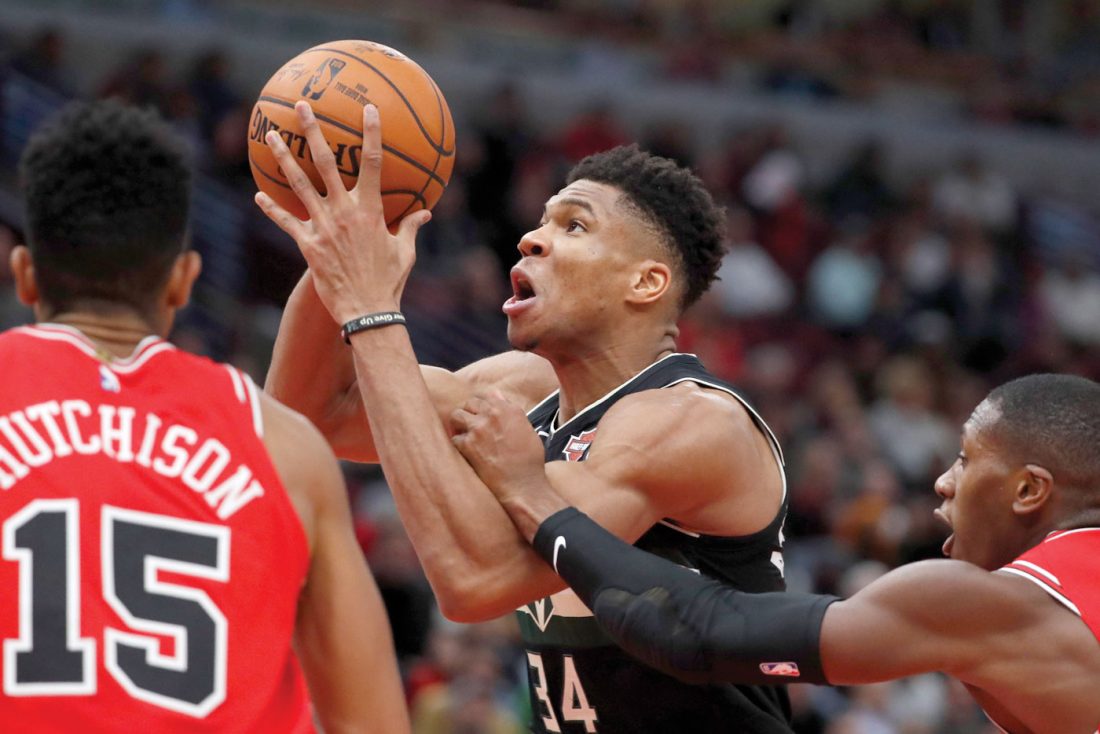 AP Photo MILWAUKEE’S GIANNIS ANTETOKOUNMPO, center, drives to the basket past Chicago’s Chandler Hutchison (15) and Kris Dunn during the second half Monday.

CHICAGO (AP) — Giannis Antetokounmpo showed off a couple of scratches on his hands and arms. The leader of the Milwaukee Bucks was whistled for five offensive fouls, but finished the game on the floor.

The Chicago Bulls tried everything against the NBA MVP. Nothing worked.

Antetokounmpo had 33 points and 10 rebounds, and the Bucks beat the Bulls 115-101 on Monday night for their fourth straight victory.

“Usually in the games like this that I get offensive fouls, I know that I’m aggressive. … So I’m happy with that.”

Brook Lopez added 19 points, 10 rebounds and five blocked shots as Milwaukee won for the eighth time in nine games. The Bucks also beat the Bulls 124-115 on Thursday in Milwaukee.

Antetokounmpo was 13 for 22 in his 13th consecutive double-double to begin the season. It’s the longest active streak in the NBA.

“They have a guy they can go to who can get the bucket,” Bulls coach Jim Boylen said. “That’s what good teams have. I’ve been on those teams. We’re figuring out who that guy is.”

Daniel Gafford led Chicago with 21 points in his return from the G League. Coby White had 13, and Ryan Arcidiacono finished with 12.

The Bulls got a season-high 63 points from their reserves, but Zach LaVine and Lauri Markkanen struggled. LaVine finished with 11 points on 4-for-16 shooting, and Markkanen had nine on 2-for-12 shooting from the field.

“Shooters, all the players go through slumps,” said Markkanen, who is shooting just 36.2% this season. “Everybody’s broken through it at some point. When I’m staying confident, believing every shot’s going in, I know it’s going to turn around.”

Antetokounmpo got it started with a slick reverse layup. Eric Bledsoe then converted a three-point play to make it 103-99 with 5:04 left.

George Hill finished with 18 points for Milwaukee, which improved to 7-2 on the road. Donte DiVincenzo scored 15 in his third consecutive start in place of Khris Middleton, who is out with a bruised left thigh.

TORONTO (AP) — OG Anunoby scored a career-high 24 points before being poked in the right eye for the second time in four games and Toronto routed Charlotte.