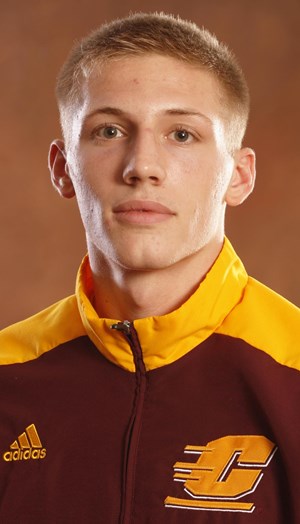 The redshirt sophomore wrestles at 197 pounds for the Chippewas.

The CMU wrestling schedule is only a couple of events into the season at this point, and Bolo has had some early-season success.

On Nov. 9 in a tournament at Appalachian State in Boone, N.C., Bolo won the 197-pound open bracket. He defeated Ethan Weatherspoon of Virginia 3-2 in the title bout while posting back-to-back, major-decision wins to reach the final. He downed Vincent Baker of Duke 13-4 and Jack Trautmann of Gardner-Webb 14-0.

Nine days later, CMU traveled to West Point, NY, to compete in the Army Black Knight Invitational, where Bolo notched one of the biggest wins in the country at this point of the season.

After receiving a first-round bye, he defeated InterMat’s No. 3-ranked 197-pound wrestler in the nation in Kyle Conel of Penn State by a 5-3 decision.

“It was the most exciting win of my career thus far,” said Bolo in a phone interview Wednesday. “Conel is a great competitor. We had a great match.”

“Those additional new teams will make the conference that more competitive,” Bolo said. “My teammates and I look forward to the increased level of competition.”

Bolo, the son of Charles and Jenn Bolo of Iron Mountain, graduated from IMHS in 2017. He finished his career at IM 137-35.

CMU heads to the East Coast next weekend for two MAC dual matches. On Friday, Dec. 6, they face Lock Haven (Pa.) University then travel to Rider University in Lawrenceville, NJ, on Sunday, Dec 8.

A tournament in Hoffman Estates, Ill. hosted by Northwestern University on Dec. 29-30 will be the first competition for CMU after the holiday break. Friday night Jan. 3, the Chippewas welcome in non-conference foe Virginia Tech for their first home dual of the season.