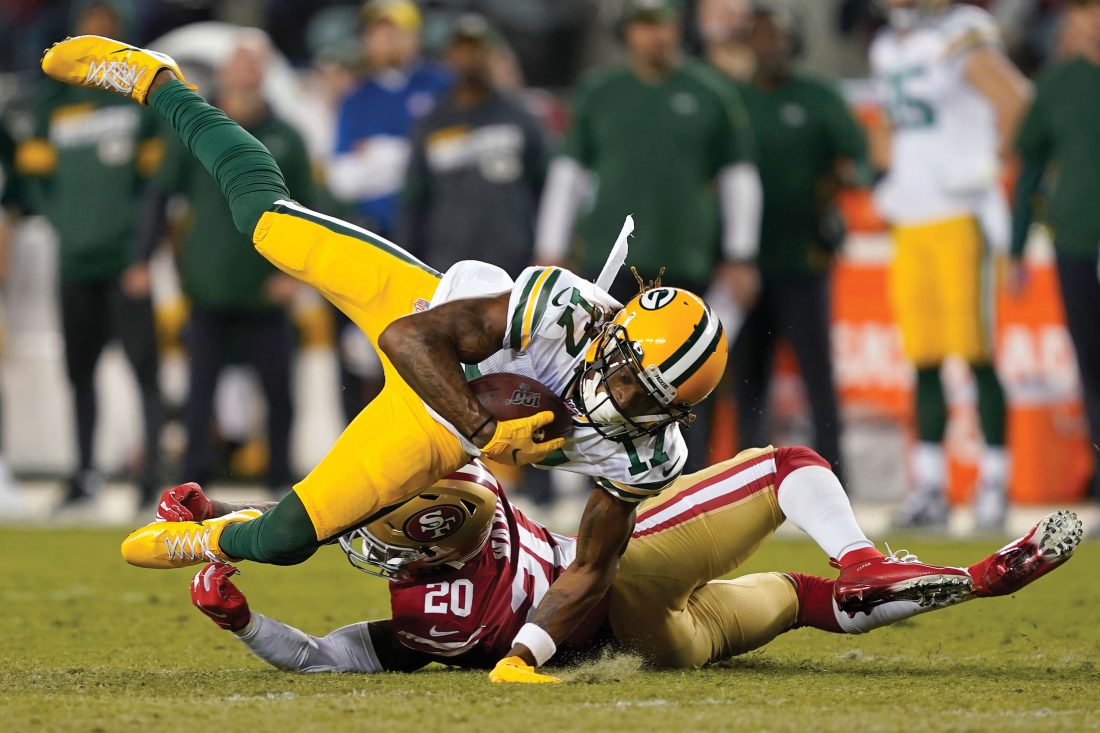 SANTA CLARA, Calif. — Aaron Rodgers dropped back on his first third down of the day, tried to avoid the pressure and got stripped on a sack that set up an early San Francisco touchdown and set the tone for the game for the Green Bay Packers.

A matchup between two of the NFC’s top teams was a complete mismatch in large part because San Francisco’s stellar defense forced Rodgers into one of the worst performances of his career.

Rodgers was held to 104 yards passing in the least efficient game of his career and the Packers went on to lose, 37-8, to the 49ers on Sunday night in a performance that left Green Bay searching for answers.

“There wasn’t a whole lot positive tonight,” Rodgers said. “A lot of the stuff we talked about during the week, eliminating negative yardage plays, obviously we didn’t do that. They got after us up front, and the coverage was good on the back end.”

The game started with the strip sack by Fred Warner that led to a recovery by Nick Bosa at the 2 and a touchdown run by Tevin Coleman and didn’t get much better after that for the Packers (8-3).

They fell into a 23-0 hole at halftime, allowed a 61-yard touchdown pass from Jimmy Garoppolo to George Kittle two plays after scoring their only touchdown and put up anemic numbers on the night.

Rodgers finished 20 for 33 for 104 yards, posting his lowest yards per attempt in his career. He was sacked five times, went 0 for 8 on passes that went at least 10 yards downfield and failed to convert any of the 13 third-down tries when he was in the game.

The loss dropped the Packers into a tie for first place with Minnesota in the NFC North.

After the turnover on the opening drive, the Packers went three-and-out their next three possessions. They were stopped on a fourth-and-1 run by Aaron Jones on the next drive of the game and punted three more times to end the first half, gaining only one first down on those three possessions.

“We hurt ourselves again,” receiver Davante Adams said. “We just keep putting ourselves in these tough positions. When it’s third-and-forever or second-and-forever, it’s tough to comeback against a good team like that. We just have to put ourselves in a better position in early downs. That’ll be a start and then the rest you still have to execute, but you definitely put yourself in a terrible spot when it’s second-and-20 or second-and-whatever because of holding or jumping offsides or just not moving the sticks. We have to be better there.”

When the Packers finally got something going offensively with a TD drive taking 8:34 in the third quarter on Rodgers’ 2-yard pass to Adams, things quickly fell apart defensively with the blown coverage on Kittle’s long touchdown.

It was all part of a forgettable night for Green Bay.

“I think every loss is a test,” Rodgers said. “We have leadership in this locker room. It kind of surfaced there in some postgame remarks by some of the guys. I’m not going to get into who said what, but it was definitely encouraging hearing some of those voices. I feel good about our culture, but we have to improve on offense and set the tone a little bit better than we did. Obviously I fumbled on the first drive and gave them seven. We just didn’t get anything going.”