No. 2 Kentucky tops No. 1 Michigan State 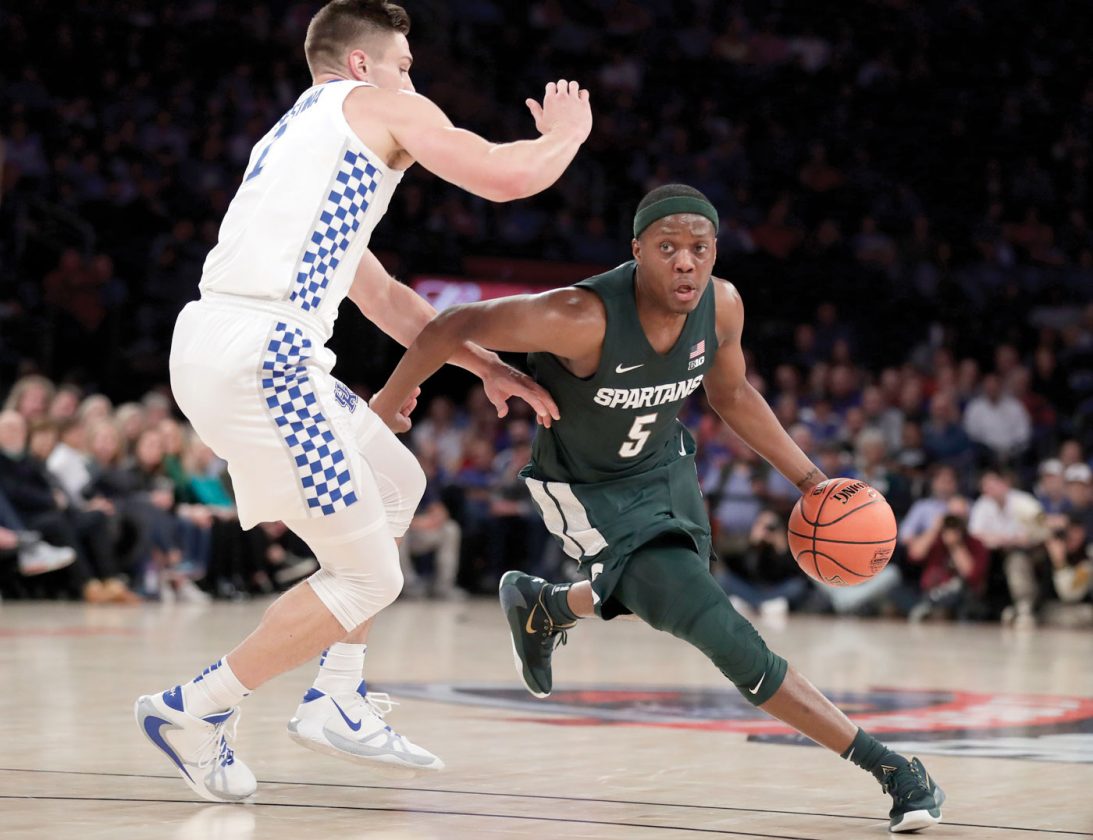 Tyrese Maxey scored 26 points, including a clutch 3 that beat the shot clock with a minute left, and the second-ranked Wildcats opened the season with a 69-62 victory over No. 1 Michigan State on Tuesday night in the Champions Classic.

A day after his 19th birthday, Maxey came off the bench at Madison Square Garden and had one of the best debuts for a freshman in coach John Calipari’s 11-years at Kentucky, which has been filled with one-and-done guards like John Wall and Devin Booker.

“I wanted him to come in firing,” Calipari said.

The Nos. 1 and 2 teams opened their seasons against each other for the first time since 1975, and the Wildcats made their case to be top-ranked next week.

Michigan State entered the season as the No. 1 team in the country for the first time, but aside from All-American Cassius Winston, the Spartans struggled to score. Winston had 21 points.

This Kentucky team is built around returning contributors instead of freshmen, but Maxey asserted himself in his first game.

After Winston cut the lead to three on a three-point play with 1:27 left, Maxey hit a 3 from way behind the line to make it 65-60 with 59 seconds left.

“Honestly, I just trust my training,” Maxey said. “I shot that shot a thousand times.”

Neither game was particularly well-played, and each coach said they would have liked to have had a couple of games under their belts before stepping onto the big stage.

“There were four good teams today,” Michigan State coach Tom Izzo said. “None of them were ready for February or March. It is a very difficult thing to play that kind of competition this early.”

The passionate fanbases sold out the Garden. Kentucky supporters and Michigan State traded “Go Big Blue!” and “Go Green! Go White!” chants when things got close. It was a marquee, event but a choppy game. Neither team shot 40% from the field. They combined to take 50 free throws.

The Spartans couldn’t find the range from 3, going 5 for 26 and certainly looked like they could have used the scoring of senior guard Joshua Langford, who is expected to be out until January with a right foot injury.

Michigan State had whittled a 10-point halftime deficit down to four when Kentucky went on a 9-0 run behind 3s from Kahlil Whiney and Nate Sestina, pushing the lead to 54-41 with 9:57 left in the second half.

Kentucky’s veteran backcourt of Ashton Hagans (11 points) and Immanuel Quickley (10 points), both sophomores, but were outshined by Maxey.

“He put on a show,” Izzo said. “He’s got great intangibles. He’s happy-go-lucky but plays hard.”

The 6-foot-3 guard attacked the basket and made big 3s.

“It was an amazing birthday celebration,” Maxey said. “I’m very happy, happy for me and my guys. It was a lot of fun out there.”

Calipari improved to 6-4 against No. 1 teams, including 3-2 at Kentucky.

The Wildcats looked more the part of the No. 1 team in the country in the first half, building 34-24 lead and disrupting the Spartans with their length and depth. It was all Winston for Michigan State. The senior had 12 points, and the rest of the starting lineup managed just two points.

NEW YORK (AP) — Tre Jones scored 15 points and Cassius Stanley added 11 of his 13 points in the second half to help Duke beat Kansas in the opener of the Champions Classic.

While Duke doesn’t have the star-studded freshmen class of last season of Zion Williamson, Cam Reddish and RJ Barrett, coach Mike Krzyzewski may have a more balanced team, capable of making plays down the stretch when needed.

Trailing 61-59 with 2:29 left, Stanley drove and made the layup and was fouled. He converted the free throw to give the Blue Devils a one-point lead. Devon Dotson missed a layup on the other end and Jones then hit a jumper that bounced off the rim twice before dropping in with 1:33 left.