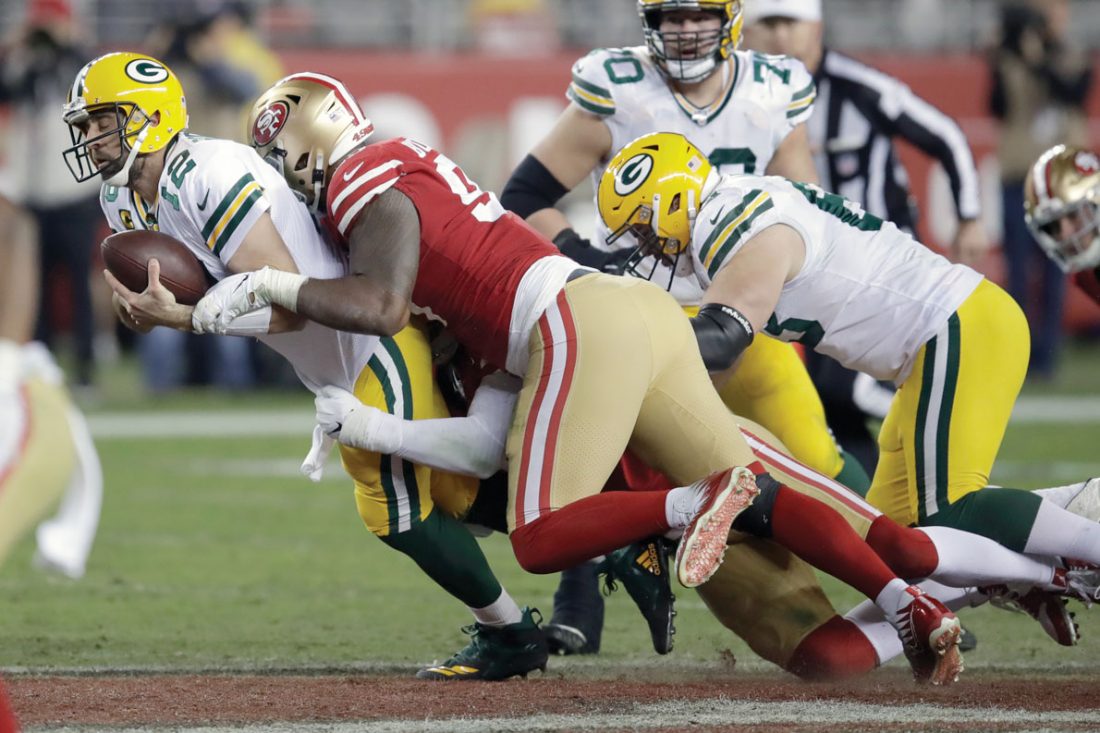 GREEN BAY, Wis. (AP) — Win or lose, Green Bay Packers coach Matt LaFleur has stressed the need for his team to “hit the reset button” and move onto the next game.

That will be as important as ever following a 37-8 loss at San Francisco on Sunday night.

The Packers were coming off a bye week so should have been prepared mentally and physically. Having played a tougher schedule, they were the more tested team. And they were the healthier team. But with first place in the NFC on the line, Green Bay was dominated in all three phases.

Green Bay must shake off this game before hitting the road to face the struggling New York Giants. How can LaFleur ensure Sunday night’s outcome doesn’t linger?

“By going back to work and taking it one day at a time and putting in the right prep. That’s the only way I know how to bounce back from anything,” LaFleur said on Monday. “I’ve got confidence in these guys that they’re going to. Everybody was hurting in that locker room.

“Everybody was disappointed. And I think these guys will battle. What I love about our group is I didn’t feel like there was anybody pointing fingers. We’ve all got to look inward — coaches, players, everybody involved — and look at ourselves and be honest with ourselves about what we can do better. We’ve shown we can do a lot better than this. You’ve got to give the Niners a lot of credit — that’s a good football team — but we know we didn’t play to the level of our expectations.”

Green Bay’s pass rush was perhaps the only bright spot. Outside linebacker Preston Smith added a half-sack to push his team-leading total to 10½ sacks. Fellow outside linebacker Za’Darius Smith had 1½ sacks to reach 10 sacks for the season. That gave Green Bay a 10-sack tandem for only the second time since sacks became an official stat in 1982.

Nothing worked against the 49ers. Offensively, Green Bay averaged 2.82 yards per play, the fourth-lowest figure in the entire league this season and failed to move the chains on its first 14 third downs.

“Against a team of that caliber, with one of the best defensive lines in the National Football League and with a sound back end, where they’re not going to give up big plays, that’s a big-time challenge to really overcome that type of deficit in their home stadium,” LaFleur said.

In four seasons with Baltimore, Za’Darius Smith had 18½ sacks. He’s got a career-high 10 this season after tallying 1½ sacks, three quarterback hits and a team-high six tackles.

When Davante Adams missed four games with a toe injury, running back Aaron Jones helped pick up the slack with 22 receptions for 280 receiving yards and three touchdowns. Adams has caught seven passes in each of his three games back in the lineup but Jones has caught 1 of 4 targets for minus-1 yard. He didn’t have any catches against the 49ers.

“That falls on me right there,” LaFleur said. “I’ve got to do a better job of making sure he’s in the game when some of those plays are called for the halfbacks.”

“Bryan’s been a rock for us at right tackle,” quarterback Aaron Rodgers said after the game.

Alex Light, an undrafted free agent in 2018, replaced Bulaga but might not get the call against if Bulaga is out against New York.

“We’ve got some other thoughts potentially to make sure that we put our best five out there,” LaFleur said. One option would be to shift right guard Billy Turner out to right tackle and insert Lucas Patrick at right guard.

6.7: Green Bay’s third-down conversion rate after going 1 of 15. That’s the third-worst performance by any team in the NFL this season. Meanwhile, there have been only eight times this season in which a team failed to move the chains 10 percent of the time.

“We were terrible on third down,” Rodgers said. “The games we’ve got out and played well on offense, we’ve had a good run game. They shut us down for a good part of the night running the ball and we couldn’t really throw it either.”

The Packers are tied with Minnesota for the NFC North lead at 8-3. Green Bay will play at the Giants (2-9) on Sunday and host the Redskins (2-9) and Bears (5-6) the following two weeks before playing at Minnesota in Week 16.