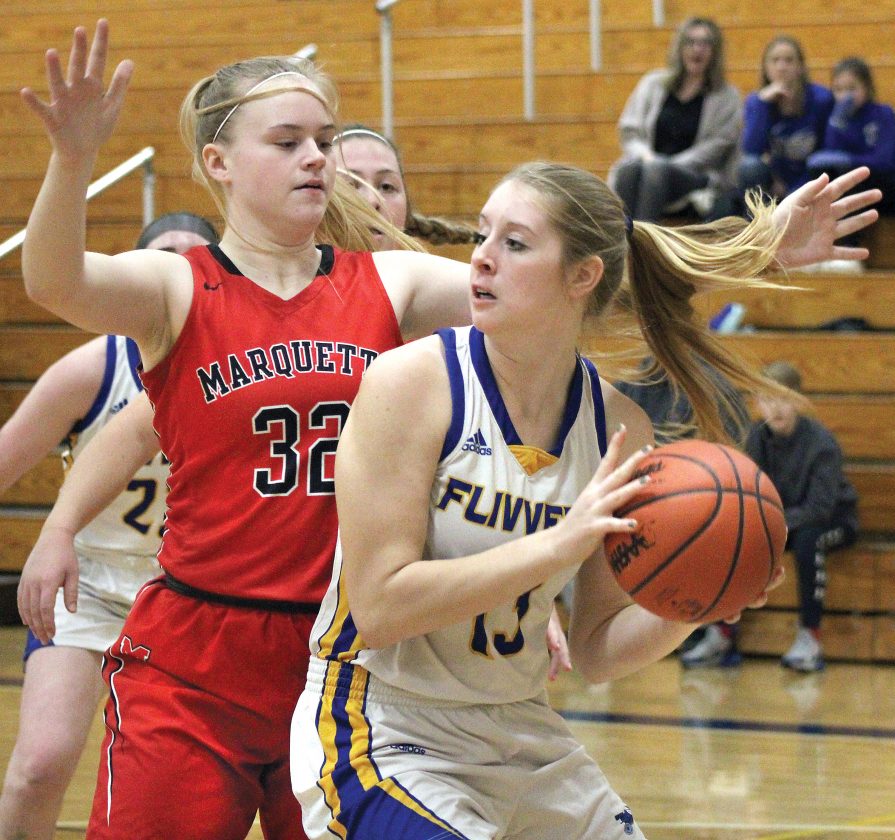 KINGSFORD — Kingsford came up with 15 steals and saw Marquette commit nearly 30 turnovers, but the Flivvers couldn’t cash in on the other end and fell 47-34 in Great Northern Conference girls basketball Friday afternoon in the first game of a varsity doubleheader.

“We struggled to score,” Flivvers head coach Lisa Harry said. I felt like we had to work so hard for every shot. Even though we created steals, we couldn’t get any easy buckets. Instead, we gave up too many easy buckets.”

Maggie Strehlow and Brooke Kriegl each totaled seven swipes for the Flivvers, who trailed by as many as nine points in the first half before closing with an 8-0 run to make it a two-point game at the break.

But the Flivvers (3-5, 0-2) found it difficult to contain Marquette’s Maria Millado, who led all scorers with 18 points.

Kingsford clawed to a 24-24 tie early in the third quarter, but a quick 5-0 response by Marquette capped by a Millado trey doused the comeback bid.

“We executed our game plan,” Harry said. “But number 12 (Millado) got away from us. She was really fast and we struggled to contain her. In the full court, she took it to us.”

Kriegl scored 12 for Kingsford and had six boards, but hit just once from beyond the arc following her five triple showing against West Iron County earlier in the week.

Following Millado’s three, Kriegl brought Kingsford back with two at 29-27 after canning her lone three, but Kingsford didn’t crack the scoreboard again for another nearly seven minutes until a runner by Kriegl with 4:37 to play in the game as Marquette was already flirting with a double-digit lead.

Sofia van den Ende followed Kriegl’s bucket with a trey, and Marquette’s lead was in double-digits for good, expanding to 16 at its highest.

“We were fighting for everything tonight,” Harry said. “I felt like the girls were playing extremely hard and gave it an outstanding effort.”

“They’re a big strong and physical team,” Harry said. “And at times, I felt we were playing right with them, but our shots were just not falling.”

Marquette head coach Ben Smith said he expected some rust from his team after having not played a game since Dec. 17 before the holiday break.

“You just don’t have that sharpness,” he said of his team’s 30 turnovers to Kingsford’s 14. Those are the things that can’t happen if you want to keep leads or expand them.

“You don’t want to keep a team like that hanging around. We have to limit those mistakes.”

Millado scored 10 of her 18 in the first half and the remaining eight in the third quarter.

“Her first half, her athleticism, really got us going,” Smith said.

Both teams’ next game is against Escanaba. Marquette (6-2) sees Esky on Tuesday, while Kingsford travels to battle the Eskymos Thursday.

In jayvee action, Kingsford topped Marquette 50-44 with 17 points from Abby Terrian 17 and 14 by Jenna Olkkonen. Brook Michelin had 11 for Marquette. Kingsford won the freshman game 38-34.