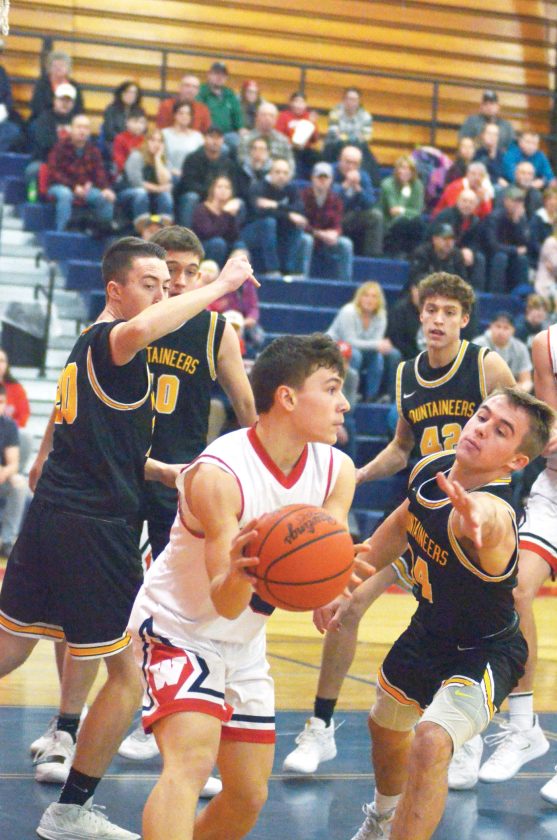 At least one of those All-Upper Peninsula Dream Teamers from last season, Johnson, was kept in check thanks to the work of Westwood sophomore Marcus Boase.

Boase limited Johnson to just 10 points, his lowest output of the season, and the Patriots gave last season’s MHSAA Division 3 state runner-up all it could handle.

Rebounding ultimately cost the home team in the end, however, with Westwood losing the board battle 43-12 and the game 53-35.

It was the offensive rebounding work of the Mountaineers in particular, with 23 offensive boards that kept the ball in their hands and out of Westwood’s. IM turned several of those rebounds into easy points.

After a road victory at Gwinn on Wednesday, Patriots head coach Scott Syrjala said he needed to get his group prepared for the challenge of facing the U.P.’s No. 1-ranked team.

“I thought we were (prepared),” he said. “I thought it should’ve been a game (tonight). I don’t want to say we gave it to them, because they’re that good and you don’t just give them a game, but I thought we gave them an 18-point win. I thought we could’ve and should’ve had more than that.

“Offensive rebounds, we gave up too many. We didn’t have a long time to work on it, but the kids, I’m proud of them. I thought for 30 out of the 32 minutes, we played as hard as we could.

“There was a two-minute stretch where (Iron Mountain) had a nine-point lead in the third quarter and I don’t know what happened. We were getting frustrated and they went on a little run. They had two 3s, an and-1, and all of a sudden it swells to 20 (points) just like that. They’re that good.”

The Mountaineers led from start to finish, but it was only a 13-7 deficit for Westwood after one quarter and a seven-point game at halftime, 23-16.

A quick triple from Johnson to open the third put I-M up 10, which began a 13-5 run for the Mountaineers and started to put things out of reach for the Patriots.

Despite Iron Mountain’s runaway in the second half, Syrjala was particularly pleased with Boase’s defense on Johnson.

“He held Marcus Johnson to 10 points and I’m not sure if anyone has done it better in the U.P.,” he said. “I thought he did a great job and the kid is only a sophomore. He’s our best defender by far. Not only on-ball defender, but overall our best defender. He did a wonderful job on (Johnson).”

Westwood shot 35 percent from the field, sinking 13 on 37 attempts, and offense will be a point of emphasis as Syrjala’s No. 5-ranked 4-2 Patriots move forward.

Head coach Bucky Johnson said it was a rough start from the field for his team as well, citing a long stretch of road contests over the first part of the season.

“A big key to that game was our defense,” he said. “We still have to improve in that aspect of it, but then we had 43 rebounds and 23 offensive rebounds, and that’s really big. Those were two keys to the game.

“We came out and we didn’t shoot the ball well from the field at all. Credit Westwood’s defense for that. This is our fifth road game in a row, so it’ll be nice to just get back in our home gym for a change.

“Last time we played at home was over a month ago, so the schedule has been a little tough in that regard as far as our shooting.”

One player Coach Johnson credited in particular was senior Bryce Pietrantonio, who had six first-half points off the bench to negate the Mountaineers’ shooting woes and help make it a seven-point lead at the half.

“I was happy with our defense, holding Westwood to 16 points (at half). Offensively, teams are throwing different defenses at us. It was just a good road win to get.

“The Westwood kids played hard, they’re physical, and they really give it a great effort out there. You’ve got to credit some of the things they did, too, as far as their effort and how hard they play.”

Westwood’s top point-getter was senior Taylor Dellangelo with 12, followed by Ty Alderton with seven and Boase six. Sophomore Zachary Carlson and senior Mason Mariuzza each had five points for the Patriots.

Iron Mountain finished 8 of 11 at the charity stripe to Westwood’s 7 of 9.

Wonders finished with 13 of the Mountaineers’ 43 rebounds, with 10 of those coming on the offensive end. Alderton had five of Westwood’s 12.