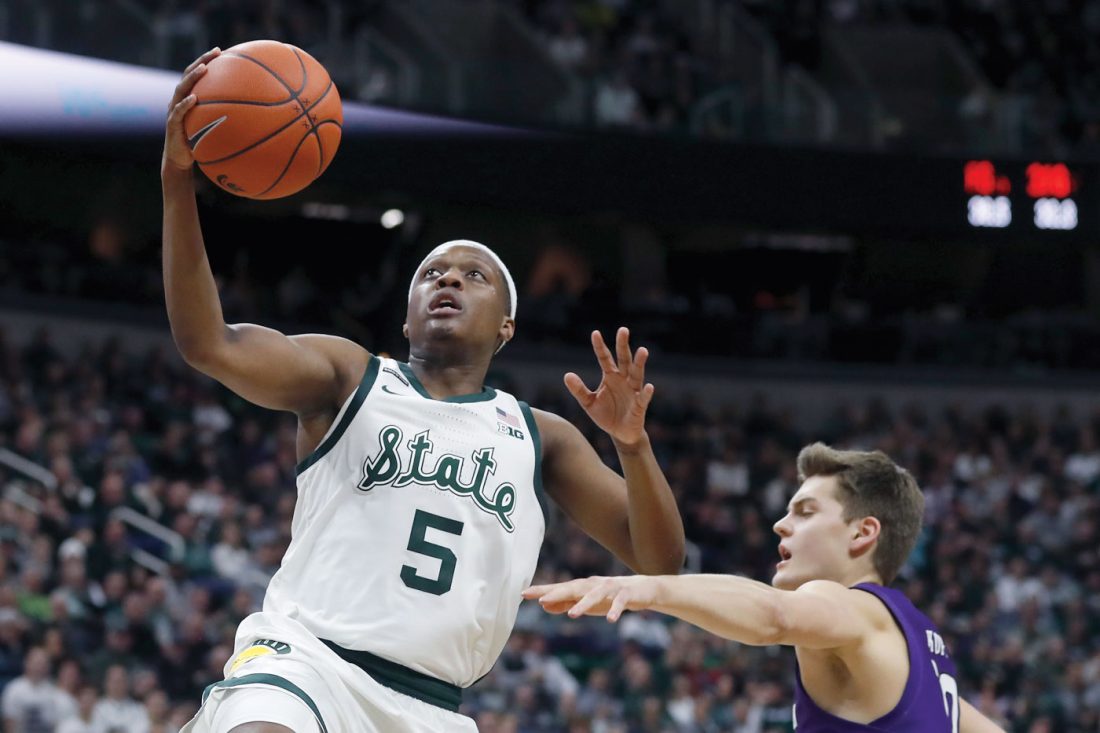 EAST LANSING, Mich. (AP) — Cassius Winston was sluggish and looked out of sorts, turning the ball over more than he was making shots.

The senior star turned it around in the second half and finished with 18 points to lead No. 14 Michigan State in a 79-50 win over Northwestern on Wednesday night.

In the end, though, Winston had at least five turnovers for the third time in five games to overshadow his scoring.

“Cassius has to play better,” Spartans coach Tom Izzo said. “There’s nothing wrong with missing shots, but some of those turnovers are not like him.” 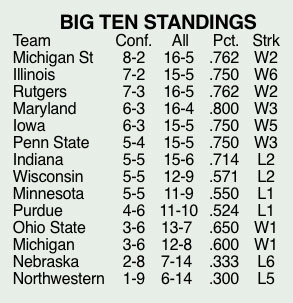 “We had a slow start because we couldn’t get shots to fall,” Winston said after visiting with family in the stands and posing for pictures with fans on the court. “When that happens, it looks slow out there. We did a good job on defense and that led to us getting our offense going.”

The Spartans (16-5, 8-2 Big Ten) moved into sole possession of first place in the conference. The lead may last only a day because No. 19 Illinois has a chance to pull into a tie Thursday night at home against Minnesota.

Michigan State had balance on offense the entire game and outscored its overmatched opponents 46-28 in the second half. The Spartans had a 44-27 edge on the boards, giving them 14 second-chance points.

Pat Spencer scored 11 points for the last-place Wildcats (6-14, 1-9) and was their only double-digit scorer in a game they never led after being relatively competitive in games recently.

“We see this as a setback because we’ve been making a lot of progress the last few weeks,” Spencer said.

The young Wildcats have lost five straight and 10 of 11 and there’s no relief in sight for the last-place team in the conference in a balanced Big Ten.

“We’re playing seven or eight guys and six of them are freshmen and sophomores,” coach Chris Collins said. “Sometimes, you get exposed in this league and hopefully you don’t more often than not.”

For MSU, a sluggish start led to a modest halftime lead, but Izzo likely said enough to motivate the team at halftime to spark the rout.

“Where we are now will not get us anywhere close to where we need to be,” Izzo said.

Freshman Malik Hall left the game with an injury midway through the second half.

“He sprained his ankle a little bit,” Izzo said.

Kyle Ahrens had three points and three assists, playing after missing three straight games and four of the previous five games with an Achilles tendon injury. He was welcomed back with a rousing ovation.

“When I went out there and heard everyone react, it meant the world to me,” Ahrens said. “It’s hard sitting out, especially in Year 5.”

“His problem is never right after the game, it’s the next morning,” Izzo said. “He gives us something. He gives us experience. He gives us a guy who can knock down shots. He’s a guy who gives us toughness. Getting him back to even 15 minutes a game would change a lot.”

Michigan State plays the short-handed Badgers (12-9, 5-5) on the road Saturday with Brad Davison serving a one-game suspension for a flagrant foul and Kobe King leaving to transfer.

“Regardless of who’s there, it’s going to be a tough game going to their gym,” Loyer said.

Ron Deuter/The Daily News Photo KINGSFORD’S SYDNEY SCOTT heads to the finish in the girls 100-yard butterfly Tuesday at the Northern Lights YMCA Dickinson Center. Scott finished second in the race with a time of 1:09.41.