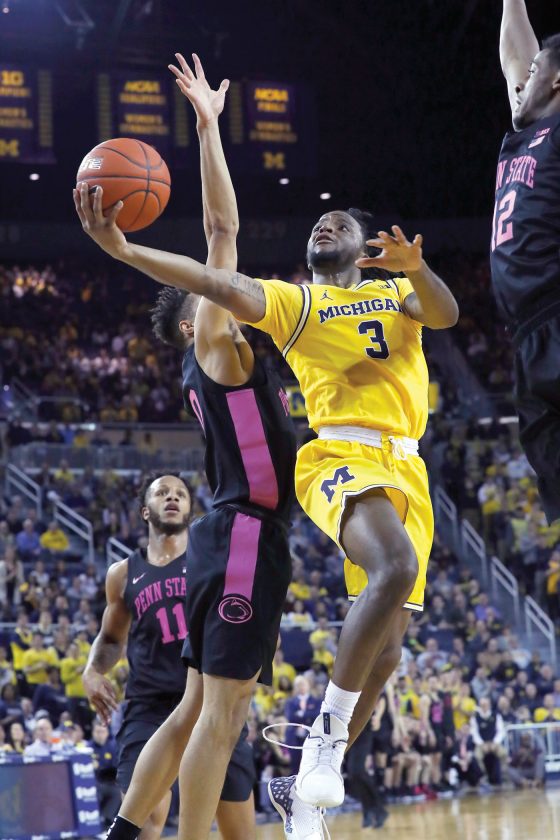 ANN ARBOR, Mich. (AP) — Lamar Stevens started scoring right away. Then Curtis Jones arrived in the second half and helped Penn State hold on for an impressive road win.

“I’m almost disappointed that we have a week off here,” Chambers said. “I think we’re starting to play our best basketball heading into February, and now we have some time off.”

The Nittany Lions don’t play again until the middle of next week, but that gives them a little extra time to enjoy their latest victory. Stevens scored 14 of his 19 points in the first half, and Penn State was in control for most of the game in a 72-63 victory over Michigan on Wednesday night.

Curtis Jones scored 18 points — all in the second half — and Myreon Jones added 16 for the Nittany Lions, who handed Michigan its third straight loss. Penn State led by nine at halftime and extended its advantage into double digits soon after that.

Zavier Simpson led Michigan with 18 points, but the Wolverines (11-7, 2-5 Big Ten) made just three of their first 21 shots from the field in the second half.

Penn State (14-5, 4-4) also beat Michigan last season. This is the first time the Nittany Lions have won consecutive games over the Wolverines since 2008 and 2009. Penn State also snapped a seven-game losing streak at Crisler Center.

Stevens scored Penn State’s first seven points, and the Nittany Lions jumped to an early 9-2 lead. Michigan rallied to lead 21-16 before Penn State went on a 14-0 run. It was 37-28 at halftime.

“I thought it was a whole team win,” Stevens said. “I got off to a good start, but I felt like everybody contributed.”

The Nittany Lions led 60-45 with 7 minutes to play. The Wolverines went on one last run and cut the lead to five on a 3-pointer by Simpson, but got no closer.

Wolverines forward Isaiah Livers missed his sixth straight game with a groin injury. Michigan is 2-4 in that stretch.

It was an impressive performance by the Nittany Lions on the road. They have recovered nicely from a three-game losing streak in the middle of the month, posting wins over Ohio State and Michigan. Wednesday’s game was Penn State’s first road win in league play.

“That’s big because in the Big Ten there haven’t been many road wins, so for us, we try to come in — we call them road kills — and try to steal as many as we can,” Curtis Jones said.

The Wolverines were 10 of 16 from the field at one point, but they endured a 6-for-34 stretch after that and couldn’t seem to stem the tide. Most of Michigan’s problems lately have come on the road, but this was an ugly loss at home. Coach Juwan Howard was asked afterward if he was concerned about things snowballing.

“I got that under control,” Howard said. “You can trust me on that one. There’s not going to be any doubt in that locker room. We will not lose trust in one another. There is a lot of season to be played.”

Michigan used only seven players. Simpson played all 40 minutes and had six assists to go along with his team-leading scoring total, but he also had six turnovers and shot 8 of 23 from the field.

The Wolverines host No. 21 Illinois on Saturday.