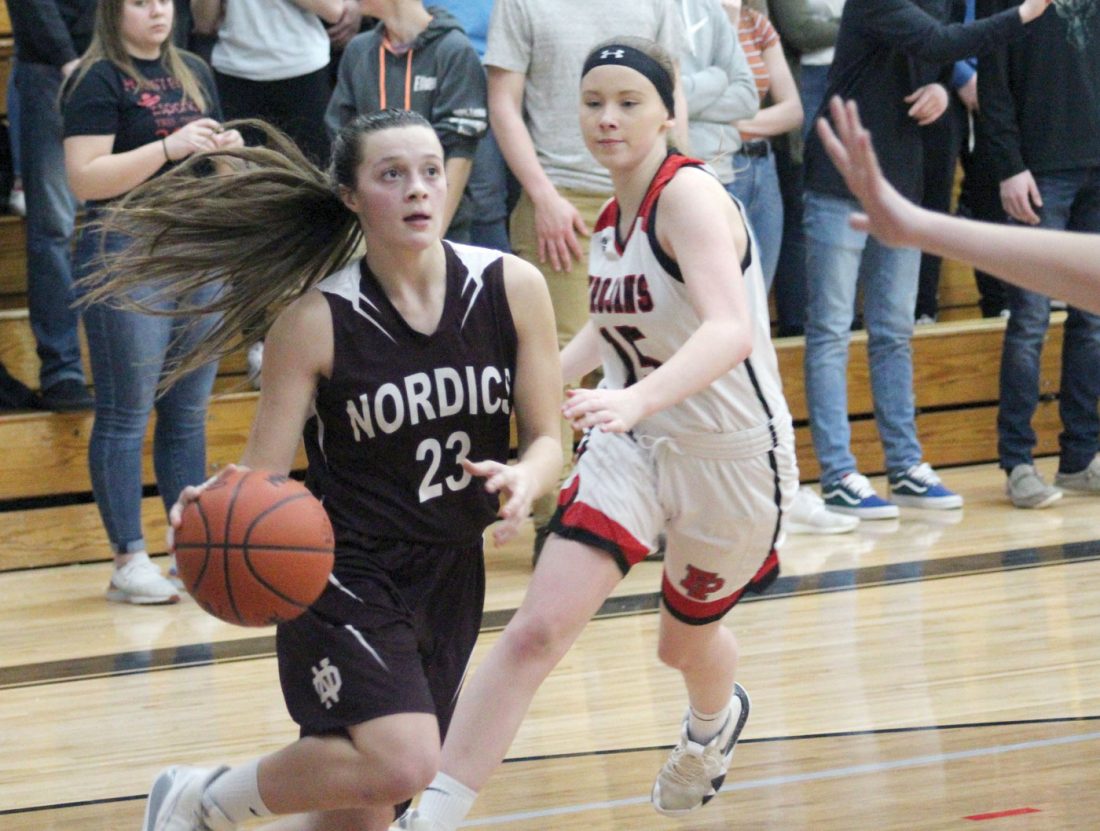 CRYSTAL FALLS — Transition baskets, efficient free throw shooting and minimizing turnovers. Those were the keys to victory for U.P. No. 5 ranked North Dickinson County in a 47-36 decision over rival Forest Park on Thursday in Skyline Conference girls basketball inside the Eddie Chambers Memorial Gymnasium.

The Nordics had three scorers in double figures, with sophomore Ashton Hord leading with 17 points. Point guard Brianna Smith added 12 points, while Hannah Clark chipped in 11, as the Nordics improved to 16-2.

Lea LaChapelle led the Trojans in scoring with 16 points, while senior center Mercedes Simmons recorded a double-double with 15 points and 21 rebounds.

“Obviously, you have to game plan for Mercedes when you get ready to play Forest Park,” Mattson said. “We were mindful of where she was on the court, and really tried to collapse down on her near the basket. Our girls really made Mercedes work hard, I am pleased with their effort.”

Mattson noted that the Nordics planned offensively to minimize Simmons effectiveness in the middle of the Trojans defense.

“We spread the floor out on the top of the key, which either kept her in the lane and we shot from outside, or it drew her out of the lane, and our guards used their quickness and drove past her,” Mattson said.

North Dickinson, especially in the second half, extended the floor in transition and got some easy baskets, due to its speed and quickness, pushing the tempo early on in the opening quarter. That prevented the Trojans from setting up their zone defense with Simmons in the middle of it.

LaChapelle drained four three-pointers for the Trojans, something Mattson said kept the Trojans in the game throughout. Forest Park head coach Kim Bjork also noted LaChapelle hitting the shots. It was the first time someone other than Simmons led the Trojans in scoring this season.

“Lea did shoot well tonight, but other than that, we didn’t shoot the ball well enough or often enough,” Bjork said. “We’ve been encouraging the girls not to be afraid to take an open shot. They did do that somewhat tonight.

“Our girls got tired trying to keep up with their quick guards. Players like that, we’re not used to guarding. Once we got tired, they got some easy shots in transition and that didn’t help.”

The last two to three minutes of the game, the Nordics dribbled the ball around at the top of the key, to kill the clock but also to keep the ball away from the Trojans as much as possible, so they couldn’t potentially mount a comeback.

The Trojans (7-12) host Bark River-Harris on Thursday to complete their SCC slate and their regular season.

North Dickinson returns home to face Rapid River on Monday night before traveling to Carney-Nadeau on Thursday night to complete their regular season and league schedule.

In the JV game, Forest Park got its first win of the season by a score of 23-16. Riley Van Sickle led Forest Park with 15 points, while teammate Maddie Divine snared 17 rebounds. Gabby Schultz led the Nordics with 14 points.