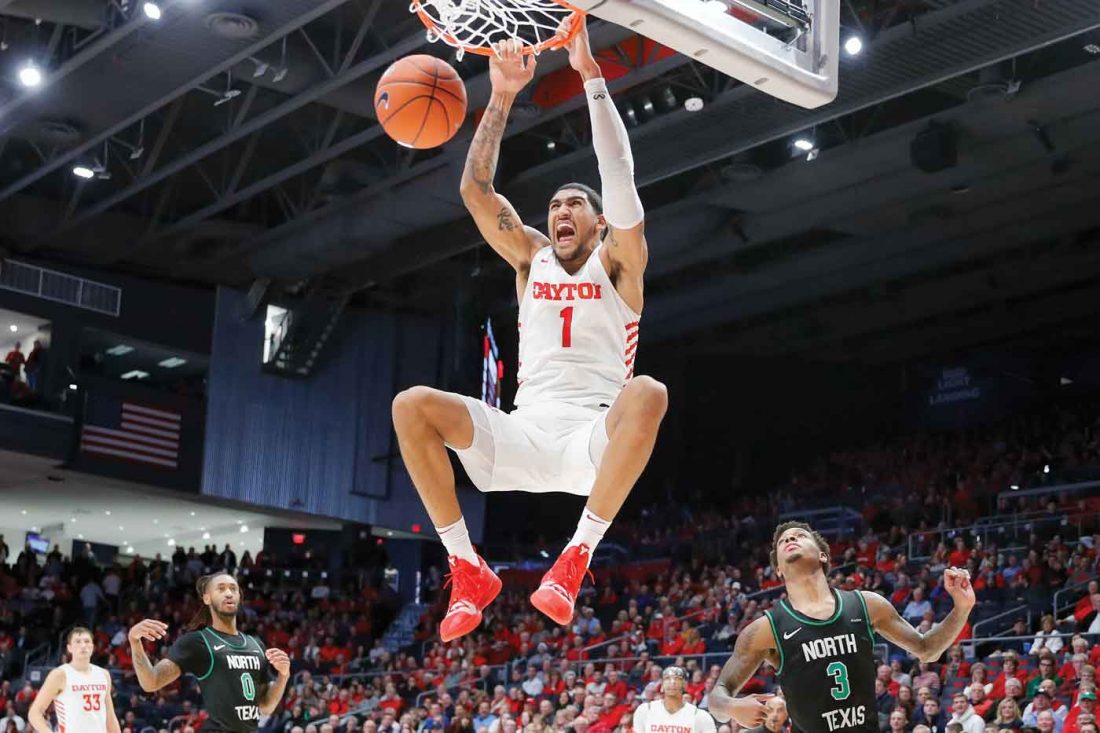 AP Photo Dayton's Obi Toppin dunks as North Texas' Javion Hamlet (3) looks on during the second half of a game, in Dayton, Ohio in December.

Obi Toppin and Anthony Grant spent the season transforming Dayton from an unranked team that wasn’t even picked to win its conference into one of the nation’s best, complete with the most wins in program history.

The pair behind the Flyers’ remarkable rise claimed The Associated Press’ top individual honors: Toppin is the men’s college basketball player of the year and Grant is the coach of the year.

“Our team is very appreciative of what we accomplished,” Toppin told the AP, “just because we made history at our school.”

Indeed. Dayton (29-2) went from being picked to finish third in the Atlantic 10 to No. 3 in the final Top 25 poll, matching the program’s best poll finish, first set in 1956. The Flyers went unbeaten in league play and in road games, leaving them positioned to claim a No. 1 seed in the NCAA Tournament that was canceled amid concerns about the coronavirus pandemic.

Now Dayton has its first winners of the AP’s top awards, joining St. Joseph’s in 2004 (with Jameer Nelson and coach Phil Martelli) as the only programs in the past 40 seasons to claim both in the same year.

“In the 31 games that we played, our guys did a heck of a job of playing consistent and taking advantage of the opportunities that were in front of us,” Grant said. “What we did accomplish in the shortened season is something I think that hopefully will be remembered.”

The 6-foot-9, 220-pound Toppin followed his unanimous selection to the AP All-America first team by appearing on 34 of 65 ballots from Top 25 voters, who submitted ballots after the cancellation of the NCAA Tournament.

Iowa junior Luka Garza was second in the balloting, earning 24 votes after averaging 23.9 points and 9.8 rebounds for the Hawkeyes. Fellow All-Americans Markus Howard of Marquette, Payton Pritchard of Oregon and Udoka Azubuike of Kansas split the remaining votes.

It wasn’t that long ago that Toppin was a 6-foot-2 high school junior who had never dunked in a game and then a senior lacking any Division I scholarship offers, sending him to prep school before ending up at Dayton. But he has blossomed as a redshirt sophomore into an efficient scorer who made regular appearances on TV highlight-reels with high-flying dunks.

He averaged 20 points and 7.5 rebounds while shooting 63% from the field and 39% from 3-point range, leading a season-long surge by the Flyers that rallied a community shaken by devastating tornadoes and a deadly mass shooting in the past year.

Dayton grabbed national attention early, taking Kansas to overtime in a loss in the Maui Invitational championship game. Their only other loss came in December on a buzzer-beating 3-pointer in overtime against Colorado. The Flyers had won 20 straight games when the season ended.

“Honestly, if you had asked me, I swear we could’ve won a national championship and our team was so ready to play in the tournament,” Toppin said. “We were so locked in. But because of this virus, things happened. It’s just going to be a what-if for the rest of our lives, but it’s something we’re going to have to live with.”

Grant earned 30 of 65 votes to claim the AP coaching award in his third season at his alma mater. Baylor’s Scott Drew, who guided the Bears to a 23-game winning streak and five weeks at No. 1, was second with 13 votes.

Grant, a former Dayton player, said he has some of the same what-if thoughts as his star player. Still, he said he prefers to be grateful for “a special group” that deftly handled the added attention and pressure that came quickly amid the Flyers’ steady climb up the rankings.

“I thought our guys’ ability to stay focused on the things they could control really told the story of our year,” Grant said. “I think from the beginning of the year to the end, there was a consistency that our guys played with, which as a coach makes me really proud.”