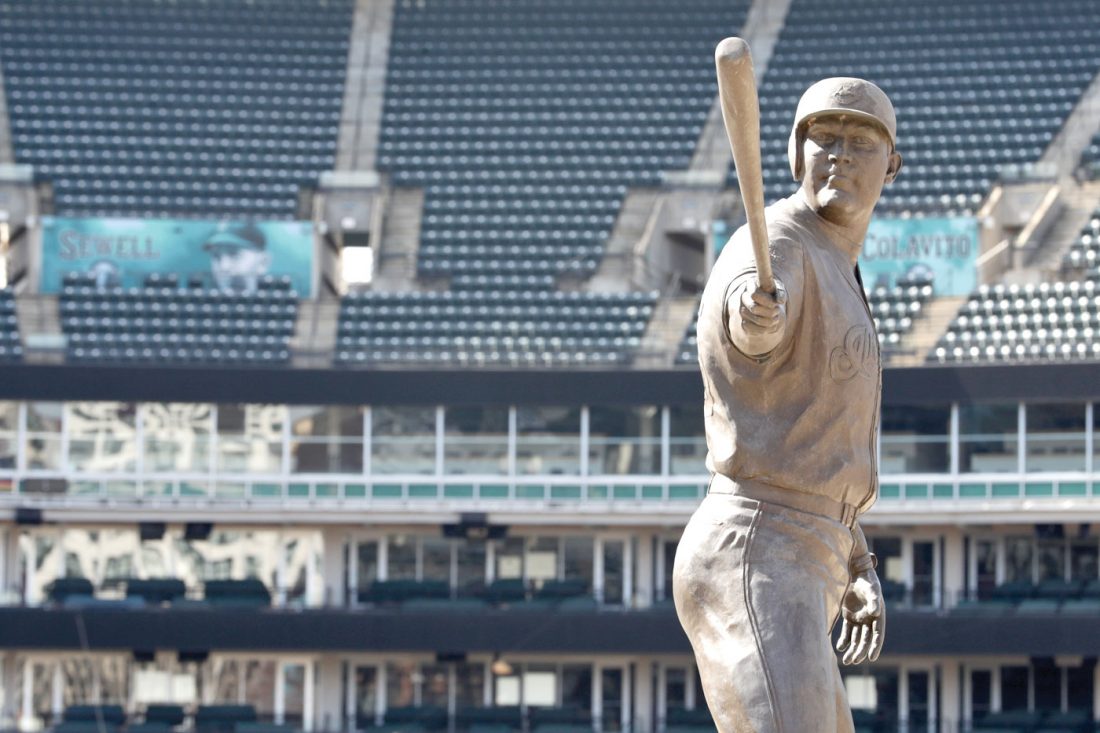 AP Photo A statue of Jim Thome stands in an empty Progressive Field on Thursday in Cleveland. The Cleveland Indians were scheduled to play the Detroit Tigers in an Opening Day baseball game Thursday.

NEW YORK (AP) — Players agreed to a deal with Major League Baseball that would preserve service time in the event this season is canceled because of the coronavirus pandemic but left open details of what a configured schedule would look like.

As part of the agreement approved by the union Thursday night, players will not challenge the loss of their salaries if no games are played.

Management will advance $170 million in salary payments over two stages, and that money does not have to be returned if the season is canceled. Player salaries this year are expected to total roughly $4 billion.

Management was given the right to cut the amateur draft in both 2020 and 2021, and to freeze the values of signing bonus money at 2019 levels.

Teams are set to approve the roughly 17-page agreement Friday.

Opening day was to have been Thursday, but was pushed back to mid-May at the earliest because of the virus outbreak. The spring training schedule was cut short on March 12 because on the pandemic, and it remains unclear when and if baseball can resume.

Both sides agreed to make a “good faith effort” to schedule as many games as possible this year, subject to government rules, travel, player health and economic feasibility.

They also agreed to consider playing past the usual end of the postseason in late October and early November, even if it involves using neutral sites and domes. They would consider a large increase in doubleheaders to get as many games in as they can, to play without fans and to revise the postseason format.

Players considered service time the key, and older players were willing to give up money to keep younger colleagues on track for big-money contracts next offseason.

If there are no games this year, anyone currently on a 40-man roster, 60-day injured list or an outright assignment to the minor leagues with a major league contract would receive 2020 service time equaling what the player accrued in 2019. If a partial season is played, service time would be the equivalent of what the player would have received over a full schedule.

Mookie Betts, Trevor Bauer, Marcus Stroman, George Springer and JT Realmuto would be eligible for free agency, even if no games are played. The Los Angeles Dodgers acquired Betts from Boston just before spring training with the assumption they would have the 2018 AL MVP for one season.

In the event of a shortened season, 2020 salaries would be prorated depending on how much of the season is played.

In addition, signing bonuses may be deferred in both years, with 10% due within 30 days of each contract’s approval and 45% on July 1 in each of the following two years.

In a late change, signing bonuses for undrafted players subject to the draft will be capped at $20,000 and not $10,000 as MLB proposed earlier.

Management also has the right to push back the start of the signing period for international amateur players from July 2 to the following Jan. 15 for both this year and for 2021. Then end of each signing period could be delayed from June 15 to Dec. 15.

In the event of a canceled season, all players who were eligible for salary arbitration last offseason would receive the same salaries in 2021 as they were due in 2020.

When the agreement is finalized, all rosters will be frozen, including trades, signings, optional and outright assignments, placement on the injured lists and designations for assignment.