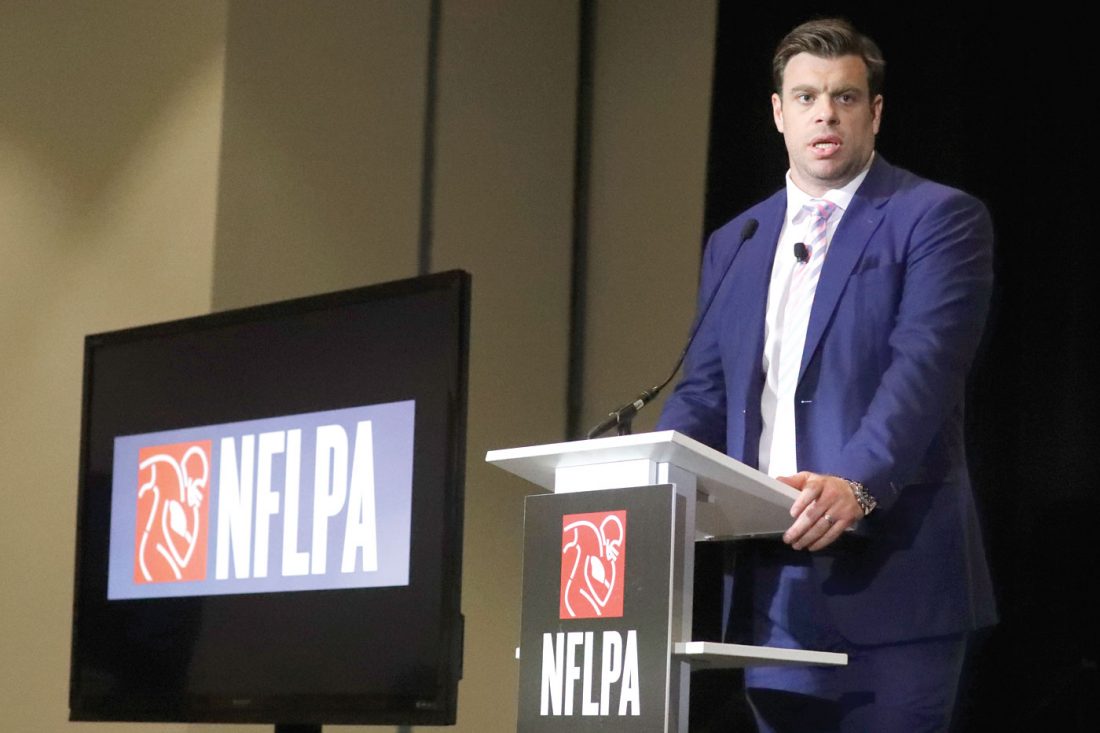 By a close vote, with some 500 union members not participating, NFL players approved a new labor agreement with the league. It features a 17-game regular season, higher salaries, increased roster sizes and larger pensions for current and former players.

The deal, which runs through the 2030 season, was accepted by the 32 team owners last month. The NFL Players Association’s membership spent the last week voting on the 439-page document after its executive board narrowly rejected it by a 6-5 vote, and the player representatives voted 17-14 in favor, with one abstention.

Clearly, there was some strong player opposition to this collective bargaining agreement, though. Many stars, including Aaron Rodgers, Russell Wilson, J.J. Watt and Todd Gurley, spoke out against it. The total vote, among the nearly 2,500 union members who participated, was 1,019-959. Ratification required a simple majority — results were announced Sunday — and there could be lasting resentment among union members, given how close the vote was.

“Can’t believe we agreed to that lol,” Colts tight end Eric Ebron tweeted. “We can only play this game for so long and y’all didn’t want everything we could get out of it? … 2030 y’all do better.”

“Around 500 players didn’t even vote on the new CBA …,” he tweeted. “It’s good and bad to this deal. I could see why anyone would vote either way. I just think it’s amazing guys don’t even care.”

Almost immediately, players were urging unity, particularly in the face of the criticism from within their ranks about approving the deal.

“The democratic process has played itself out,” tweeted Eagles safety Malcolm Jenkins, one of the most influential voices in the union. “We must be committed to unifying our current and former members. While I don’t agree with the decision because of its negative impacts on some current and former players, I do respect our process and will push forward accordingly.”

“We are pleased that the players have voted to ratify the proposed new CBA, which will provide substantial benefits to all current and retired players, increase jobs, ensure continued progress on player safety, and give our fans more and better football,” Goodell said in a statement. “We appreciate the tireless efforts of the members of the Management Council Executive Committee and the NFLPA leadership, both of whom devoted nearly a year to detailed, good faith negotiations to reach this comprehensive, transformative agreement.”

After discussions with the union during the day, the NFL sent a memo to all teams Sunday night that the league will open the 2020 NFL business season on Wednesday, as scheduled, with free agency and trades. A delay had been considered a possibility given league restrictions on travel as a safeguard against the new coronavirus.

There was no immediate word on timing and potential format changes for the draft, scheduled for Las Vegas from April 23-25, something that was also expected to be discussed by the NFL and NFLPA.

A 17-game schedule won’t happen before the 2021 season. The mechanics for an uneven number of games — neutral sites or which teams get nine home games — will be worked out in the interim.

Extending the season was a nonissue with the players in 2011, when the current 10-year deal was finalized after a 4 1/2 month lockout. It has upset many of them as it will become a reality in another season or so.

Jaguars receiver Chris Conley posted his objections to a variety of items.

“Players voted for a 17-game season,” he said on Instagram. “No extra bye week. A disproportionate pay increase that will be less than promised because of the growth of the leagues revenue. No resolved player restrictions or tags. Added mandatory fines for hold outs that take an accrued season from veteran players. On top of that this CBA cut benefits for some players in shaky medical condition. The worst part is that 500 people didn’t vote. We look like a weak union to the owners and for this reason they will continue to try to low ball and take advantage of players rights.”

Earlier, NFLPA Executive Director DeMaurice Smith explained the ins and outs of negotiating the new deal in a lengthy “open letter” tweet after the voting had concluded Saturday night.

“The current proposal contains increases across almost every category of wages, hours, working conditions and benefits for former and current players,” he said. “Like any contested negotiation … the proposal also reflects trades with the counterparty which have to be carefully weighed and assessed across the entirety of the deal. Please be confident that I hear — loudly and clearly — those of you who have passionately expressed their perspective that these gains are not enough when weighed against, for example, adding another game. That position reflects how some members have chosen to weigh what aspect of the deal is important to them.

“The fact is, however, that there are literally hundreds of issues in any collective bargaining agreement that affect thousands of circumstances and impact thousands of current and former players which we must consider carefully.”

The gains the players make in the new agreement in sharing “a bigger portion of the growing pie,” according to outgoing NFLPA President Eric Winston, swayed the vote.

–An increase from the 47% of league revenues given to the players, with that percentage dependent on the length of the season.

–A reduction of the preseason, initially from four games to three. More time off during training camps.

–Upgraded pensions, with the addition of groups of previous players not included in past agreements.

–Two more roster spots per team’s practice squad, with players having more freedom to move up to the regular roster and back. Two more will be added later in the agreement.

–Narrowing the testing period for players for marijuana use, plus lowered discipline for using it; and a reduction in on-field fines.

Adding two playoff teams was not part of the bargaining process, but the owners were able to do so without union approval. That will occur this season, with only the top team in each conference getting a wild-card bye.

With labor peace for the rest of the decade, the NFL now will turn to negotiating new deals with its broadcast partners. Results of that, including digital media, should, as Winston mentioned, substantially grow the financial pie.