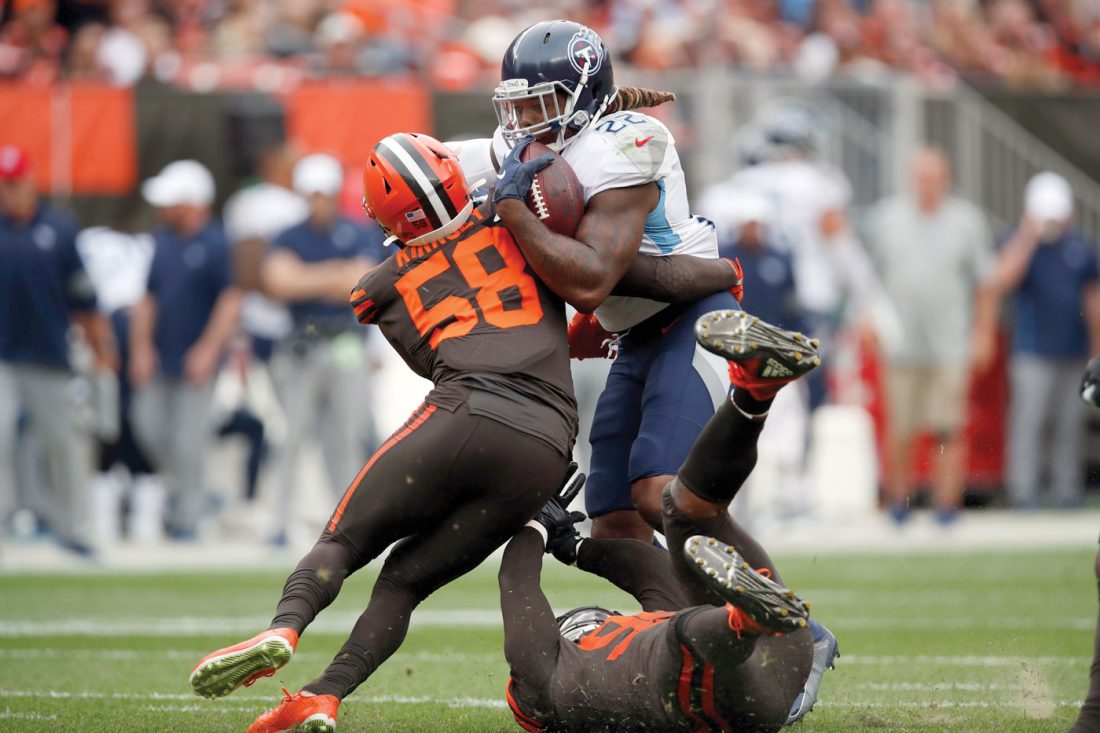 AP Photo Tennessee running back Derrick Henry (22) is stopped by Christian Kirksey (58) during a game in Cleveland.

GREEN BAY, Wis. (AP) — Linebacker Christian Kirksey has agreed to terms on a deal with the Green Bay Packers less than a week after the Cleveland Browns released him.

Kirksey’s agent, Brian Mackler, confirmed that Kirksey would be signing with the Packers but didn’t disclose terms. NFL Network first reported the deal and said Kirksey would be getting a two-year, $16 million contract. Free agency opens Wednesday.

Kirksey, 27, played six seasons with Cleveland, where he collected 148 tackles in 2016 and 138 more in 2017 before struggling with injuries the last two years.

After not missing any games in his first four seasons, Kirksey played just nine games in 2018 due to a hamstring injury. He appeared in only two games last season before going on injured reserve with a torn pectoral muscle.

He collected 484 tackles, 11 ? sacks, two interceptions and three fumble recoveries in six seasons with Cleveland. The Browns released him Tuesday.

His move to Green Bay enables Kirksey to reunite with Packers defensive coordinator Mike Pettine, who was the Browns’ head coach from 2014-15.

A need at LB became more critical when free-agent linebacker Blake Martinez left Green Bay for the NY Giants, after leading the Packers in tackles the last three seasons. Martinez reportedly agreed to a $30 million three-year deal with the Giants.

The NFL has barred in-person interviews with free agents and is requiring local physical examinations for them rather than team-conducted exams.

In a memo sent to the 32 franchises on Monday, the league also banned travel by team personnel to meet with free agents as well as those players traveling to team facilities. The league’s business year begins Wednesday, and the period in which players’ representatives could negotiate with clubs began Monday — though no deals could be finalized.

All offseason activities such as meetings, practices and minicamps have been delayed indefinitely as a safeguard against the new coronavirus. No players can enter a club facility through March 31, with the exception of those receiving medical treatment.

In a flurry of activity around the league Monday night, the Dallas Cowboys and top receiver Amari Cooper agreed on a $100 million, five-year contract. That came after the Cowboys placed their exclusive franchise tag on Dak Prescott, securing the rights to their star quarterback for an estimated $31.5 million while the sides continue working on a long-term deal.

Free agent quarterback Marcus Mariota agreed to join the Las Vegas Raiders, giving them an experienced backup who could also challenge Derek Carr for the starting role. Mariota, the No. 2 pick in the 2015 draft, lost his starting job in Tennessee last season to Ryan Tannehill.

Earlier, things got even hotter in the desert on offense with one of the NFL’s biggest stars, DeAndre Hopkins, headed to Arizona.

In a stunner that overshadowed several other trades and a slew of offers to unrestricted free agents, the Texans sent their three-time All-Pro receiver to the Cardinals for running back David Johnson, a second-round draft pick this year and a fourth-rounder in 2021.

Fourteen franchise tags were handed out, the most since 2012, with only one to a quarterback in Prescott. The other big names among those franchised were Titans running back Derrick Henry; Bengals receiver A.J. Green; Chiefs defensive tackle Chris Jones; and Buccaneers linebacker Shaq Barrett.

In other pending deals or moves:

— The Packers agreed to terms with former Detroit Lions offensive tackle Rick Wagner, according to NFL Network. Wagner, a former Wisconsin Badgers lineman and fifth-round pick in 2013, will receive a two-year, $11 million contract, according to ESPN.

— Free agent tackle Jack Conklin agreed to a three-year, $42 million contract with the Browns. A 2016 All-Pro as a rookie, he will get $30 million guaranteed and earn $20 million in his first year. Cleveland also released veteran safety Morgan Burnett.

— Minnesota reached an agreement with punter Britton Colquitt on a three-year, $9 million contract in which he will get $5 million in guaranteed money.