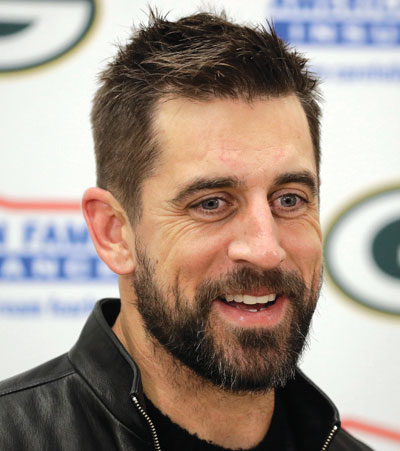 Packers star Aaron Rodgers acknowledges Green Bay drafting a quarterback in the first round surprised him and complicated his hopes of playing his entire career with the same team.

The Packers traded up four spots in the first round last month to take Utah State quarterback Jordan Love with the 26th overall pick. The move has raised speculation about Rodgers’ long-term future in Green Bay, no matter how much team officials emphasized afterward that the two-time MVP remains the clear-cut starting quarterback for the foreseeable future.

“I think the general reaction at first was surprise, like many people,” Rodgers said Friday in a conference call that marked his first public comments on the Packers’ draft. “Obviously I’m not going to say that I was, you know, thrilled by the pick necessarily, but the organization is thinking not only about the present but about the future. And I respect that.”

The 36-year-old Rodgers has been with the Packers since they selected him with the 24th overall selection in 2005.

Rodgers, who owns the best career passer rating in NFL history, has four years remaining on his contract after signing a four-year, $134 million extension in August 2018 that included more than $100 million in guaranteed money.

“There are some new factors that are out of my control,” Rodgers said. “My sincere desire to start and finish with the same organization, just as it has with many other players over the years, may not be a reality at this point. As much as I understand the organization’s future outlook and wanting to make sure they’re thinking about the team now and down the line, and I respect that, at the same time I still believe in myself and have a strong desire to play into my 40s. I’m just not sure how that all works together at this point.”

“He’s one of the most competitive people I’ve been around,” LaFleur said. “You can see that competitiveness every time we step on the field. I don’t think it’s going to drive him any more than if we would have drafted somebody else. That’s who he is. That’s how he’s wired. That’s why he’s achieved the things he’s done throughout his career.”

Rodgers also expressed confidence in his team’s receiving corps after the Packers made the surprising decision not to draft any wideouts. Davante Adams was the only Packer to catch as many as 50 passes or accumulate as many as 500 yards receiving last season.

“For them to not pick a guy early on to me says they really like our guys and have faith in them. … I feel really good about that group and obviously the front office did as well,” Rodgers said.

Rodgers finished 12th in passer rating and 21st in completion percentage last year, but still threw 26 touchdown passes and only four interceptions. The Packers went 13-3, won the NFC North title, but the season ended with a 37-20 loss to the San Francisco 49ers _their third NFC championship game defeat in the last six years.

Rodgers says he’s always had good relationships with his backup quarterbacks and expects a similar dynamic with Love. He said he’s had “some great conversations” with Love and noted they have something in common as players who weren’t heavily recruited out of high school.

“He didn’t get asked to be drafted by the Packers,” Rodgers said. “He’s not to blame at all. He’s just coming in excited for his opportunity. We had a great conversation the day after the draft and I’m excited to work with him. He seems like a really good kid with a good head on his shoulders.”