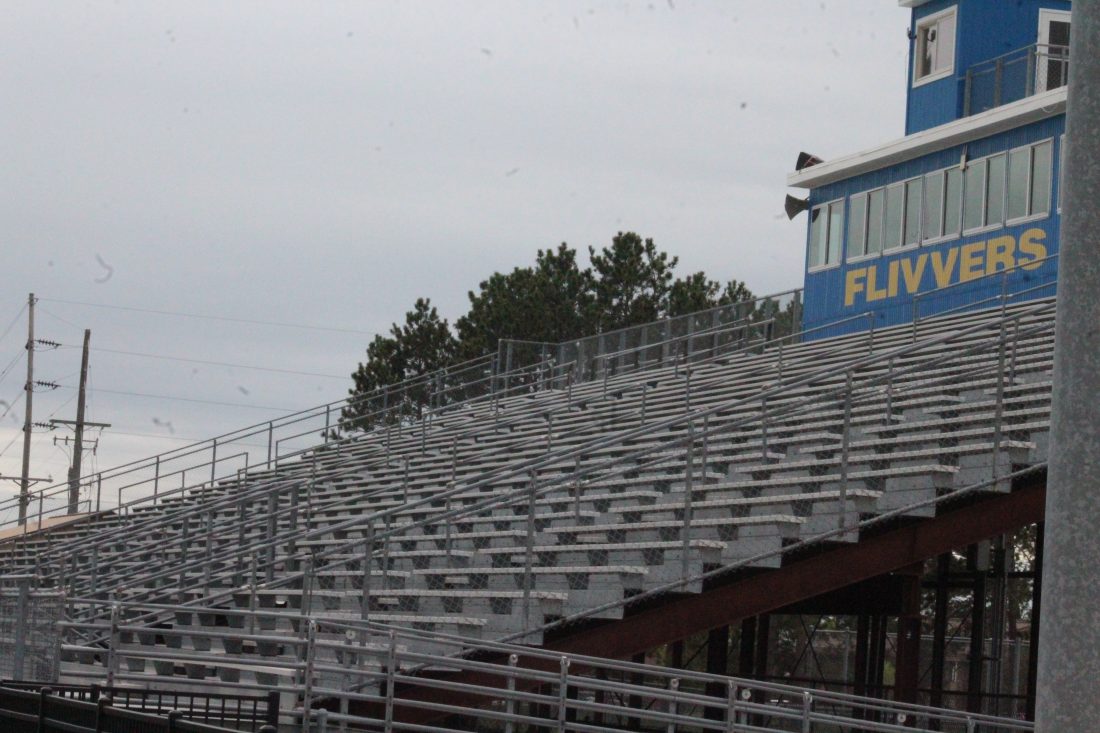 Matt McCarthy/Daily News Photo THE BLEACHERS SIT empty at Flivver Field Monday. The bleachers are typically overflowing with fans during the U.P. track and field finals, which bring thousands of people to the local area.

KINGSFORD — Annual competitions that have gone on for decades bring people together, maybe only that particular time each year, and the Upper Peninsula Track & Field Finals at Flivver Field in Kingsford is that kind of special event.

The Michigan High School Athletic Association competition has been held at Kingsford annually since 2000. It was also held there in 1996 and 1997. Prior to 1996, it was held for decades at Marquette Senior High School, as well as in 1998 and 1999.

Dubbed by former Daily News Sports Editor Burt Angeli as “the longest day in sports,” the meet is held in Kingsford for a couple of reasons.

Dickinson County is a fairly centralized location, but perhaps more importantly the Flivver Field facility is one of the best in the state. Also, the weather is more likely to be agreeable. There are no disrupting wind gusts from the Great Lakes — a potential factor at both Marquette and Escanaba.

The U.P. finals attract about 3,000 spectators each year, plus athletes and coaches, translating into a good amount of revenue for the area. 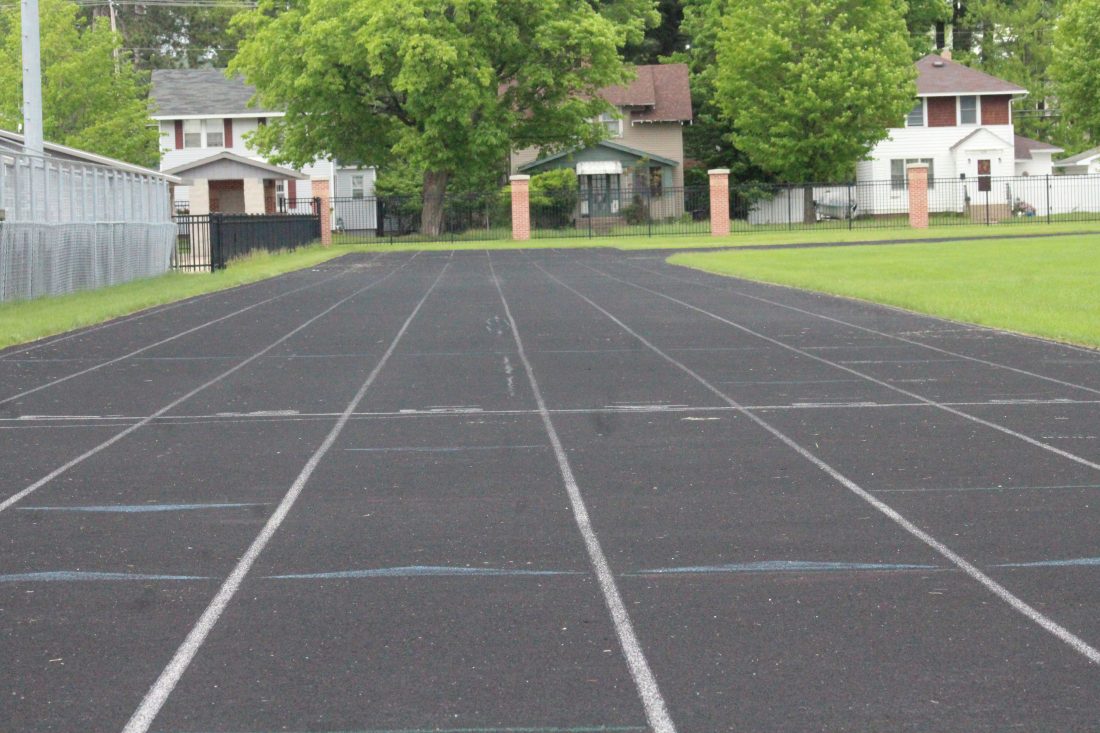 Matt McCarthy/Daily News Photo THE FRONTSTRETCH AND fourth turn of the Flivver Field track sits empty on Monday, missing the resemblance of the aftermath of the annual U.P. Track and Field Finals, which was scheduled to be held on May 30. The MHSAA’s cancellation of the spring sports season wiped out the annual event.

There are currently 53 U.P. high schools with a varsity track program, although not all of them qualify athletes for the finals. Some are represented by as few as one competitor, while Marquette may have upwards of 20 in both the girls and boys events.

This year, of course, the entire MHSAA spring sports season was canceled, due to safety concerns and precautionary measures taken for the coronavirus.

Kingsford’s first-year Athletic Director Chris Hartman and former AD and current Assistant High School Principal Al Unger shared some thoughts on what it takes to host the event, and reflected on the unprecedented cancellation.

“I’d usually start my checklist for contacting workers, volunteers and timers the beginning of April, or sometimes sooner depending on when spring break was at school,” said Unger. Up to 150 to 300 phone calls, emails and face to face conversations are required, he noted.

At least two days prior to the meet, Kingsford custodial staff and some additional school staff spend several hours setting things up. There’s as much time spent dismantling and cleaning, Unger said.

Twenty or more teams travel to Dickinson County the day before the meet, and stay the night, due to the distance of travel. “I would open up the track from around 3:30 until about 7 p.m., for teams and athletes to warm up and get used to the facility,” said Unger.

In recent years, 150 to 170 workers and volunteers have been present on the track, in the concession stand or the press box. Nearly 200 workers had been needed when timing was done manually.

“When Superior Timing came in about seven or eight years ago, everything went digital,” Unger explained. “They have an electronic board for results and lane assignments as well. They’re a top-notch company, they do timing for Olympic qualifying events and larger scale track meets. Such an incredible asset for us each year.”

“(Before the virus) I already had some officials lined up, plus a timeline in place of what I needed to do when,” said Hartman. “Al (Unger) got me started moving in the right direction, but other than that, I was waiting for the winter sports to end and I was going to get going with the checklist.”

As far as officials go, MHSAA requires the meet AD to hire five MHSAA registered track officials — two starters, two referees (for the corners and backstretch) and one official to roam and oversee all the field events.

Unger emphasized one important crew — the grievance committee — which is a group of five people, usually experienced girls or boys coaches from across the U.P. The committee is set up ahead of time, chosen and contacted prior to the event. Their job is to settle all grievances or finish line disputes.

“Sometimes, the grievance committee isn’t needed all day, sometimes they’re busy. It depends on the year and how the finishes seem to go,” said Unger.

In the event of a tie, the field event continues until there’s an overall first-place

Matt McCarthy/Daily News Photo THE BLEACHERS SIT empty at Flivver Field Monday. The bleachers are typically overflowing with fans during the U.P. track and field finals, which bring thousands of people to the local area.

Matt McCarthy/Daily News Photo THE FRONTSTRETCH AND fourth turn of the Flivver Field track sits empty on Monday, missing the resemblance of the aftermath of the annual U.P. Track and Field Finals, which was scheduled to be held on May 30. The MHSAA’s cancellation of the spring sports season wiped out the annual event.

finisher; but second place on down can have a tie. Unger noted that occasionally there are ties in running races, but those are determined by Superior Timing’s photo finish equipment. The meet manager takes note of all ties, so additional medals can be ordered and sent to the corresponding school.

With four heats in each running event, and the schools separated into four divisions, that makes 16 heats for each running and hurdle event.

“If time drags in between heats and events, wasted minutes become hours,” said Unger. “Things have to stay flowing, or it becomes an even longer day.”

Two individuals who keep the speed and tempo of the meet on pace are course and lane clerks Scott McClure and Craig Allen. “Without the two of them, we’d be there all night,” Unger said.

As the field events start to be completed, the meet tends to wind down. “It’s a huge sigh of relief,” Unger noted.

At that point, a large portion of the event facilitators and workers are done and can leave. As well as some of the competitors and coaches.

“The meet then becomes more centralized and the meet manager can simply focus on completing the running events,” said Unger.

One thing that Hartman emphasizes is accommodating workers and volunteers. “You always have to take care of them, they’re an important piece,” he said.

Another asset is the certified athletic trainers from Dickinson County Healthcare System. “Year after year they’re here and it’s a great thing for everyone involved, especially if it’s a hot day,” Unger said. The DCHS trainers set up a tent for shade for any athletes who may need it.

“It’s very important to myself and the rest of our administration, that all of the dedicated volunteers and workers are thanked,” Unger said. “Many of these people are here to help us each year and have done so for a very long time. Some of them plan the beginning of their summer around being available to help with the event; we wouldn’t be able to host U.P Finals without them,” he said.