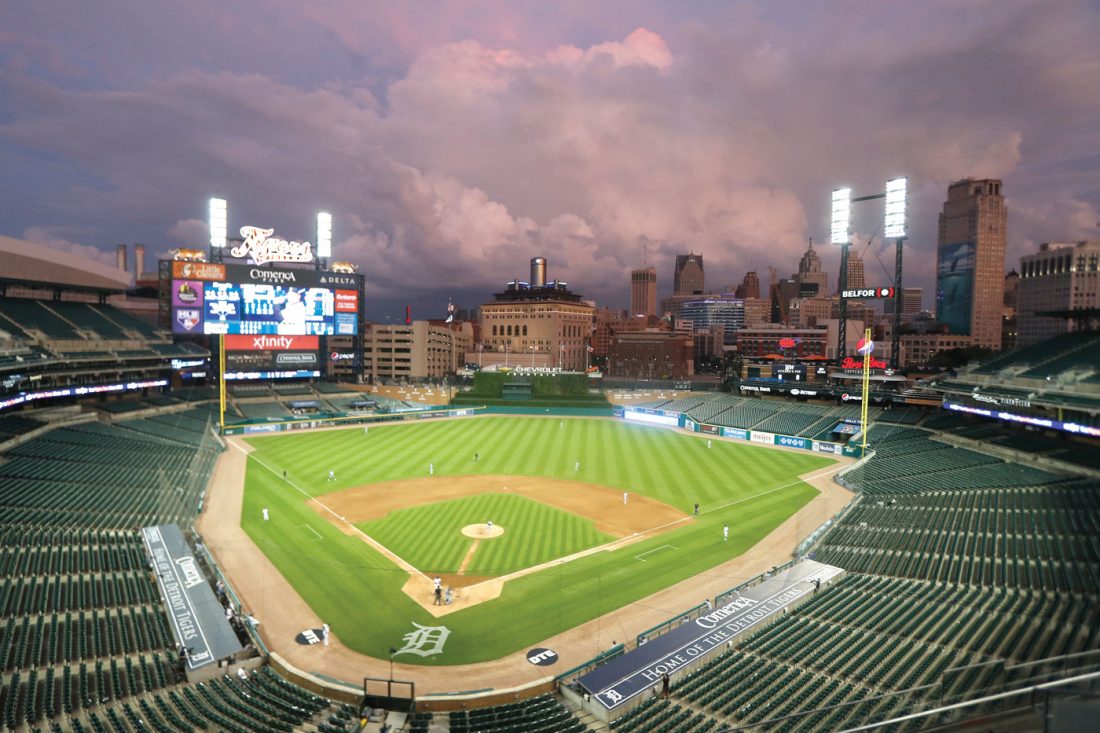 (AP Photo) The sun sets as the Detroit Tigers and the Kansas City Royals play a baseball game Monday.

Whit Merrifield had three hits and three RBIs, finishing a triple shy of the cycle on a night when the Royals rallied from an early 5-1 deficit. Foster Griffin (1-0) won in relief, but he also had to leave his major league debut with a left forearm strain.

“Day One, this happens. Been healthy my whole career,” Griffin said. “So it wasn’t easy.”

Detroit’s Michael Fulmer allowed three homers in his first start back from Tommy John surgery. The Tigers didn’t plan on a long outing from the right-hander, and he allowed four runs and five hits in 2 2/3 innings after missing the whole 2019 season.

“Not the Cinderella comeback story I was hoping for, but just a little rusty,” Fulmer said. “Not going to make any excuses, I feel ready and told everybody I was ready. I need to do better job next time.”

Kansas City took the lead for good with a six-run fourth. Kyle Funkhouser (0-1), making his big league debut in relief of Fulmer, allowed a two-run single by Ryan O’Hearn that made it 7-5.

“Just so proud of this group,” Royals manager Mike Matheny said. “You give up a five-spot, really easy for a club to roll over right there. These guys, you could tell they were into it the whole time and didn’t get discouraged at all.”

Beau Burrows then came on to make his debut, and Franco greeted him with a three-run homer to left. Reyes, the left fielder, fell down when he reached the fence as the ball sailed over.

Franco also homered to open the scoring in the second, but the Tigers answered with five runs in the bottom of the inning, including Jones’ three-run shot. Merrifield and Perez homered in Kansas City’s three-run third.

The ballpark was mostly empty because of the coronavirus pandemic, although there were some folks who may have had a decent view on the deck of the Detroit Athletic Club high beyond center field. It was certainly a warmer home opener than Detroit is used to, and it was the first time the Tigers played their home opener at night since 1980.

The Tigers Detroit had planned to start RHP Dario Agrazal in Tuesday’s game, but he went on the 10-day IL Monday with a forearm strain. The Tigers recalled RHP Anthony Castro.

Major League Baseball has already postponed a second scheduled game between Miami and Baltimore after more than a dozen Marlins players and staff tested positive for the coronavirus, prompting the club to lock down in Philadelphia. Commissioner Rob Manfred said the soonest the Marlins could resume their schedule is Wednesday, when they are set to play in Baltimore.

The Yankees and Phillies also postponed their game Monday after the Marlins played in Philadelphia over the weekend. As of Monday night, the teams planned to begin their series Tuesday instead.

Word of multiple positive tests among players on the Marlins and Reds rosters shook many around the game.

“Baseball is in huge trouble,” said Dr. Andrew Morris, a professor of infectious diseases at the University of Toronto. “It makes me wonder if they are listening to the advice of experts or whether their experts are giving them good advice. This was not a plan anyone who knows what they are talking about would have conceived. It’s playing out like it was supposed to play out.”