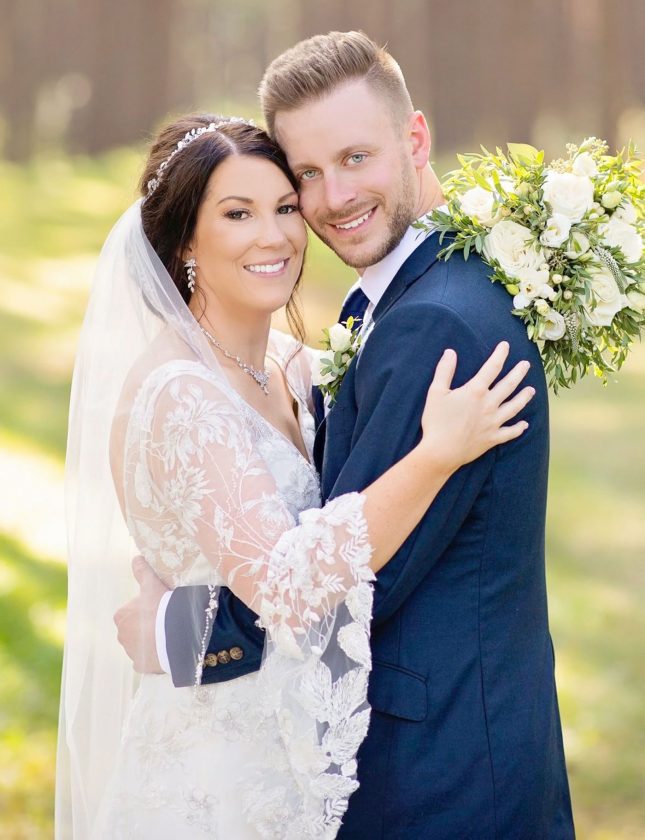 QUINNESEC — Caroline Kelly Cameron and Brendan Joseph Tuchowski were united in marriage Saturday, Aug. 17, 2019, during a 2 p.m. ceremony at Verso Park along the Menominee River in Quinnesec. They were blessed with a beautiful, sunny 80-degree day. The marriage was officiated by the bride’s uncle, Dr. Scott E. Cameron of Eau Claire, Wis.

Caroline is the daughter of Dr. Ray and Julie Cameron of Spread Eagle, Wis. Brendan is the son of Mel and Michelle Tuchowski of Kingsford.

Caroline was given in marriage by her father, Dr. Ray Cameron. She wore a gown by Casablanca’s Beloved collection. The dress was a white, full-length gown, featuring a leaf pattern lace overlay with silver accents, three-quarter bell lace sleeves, and a beautiful lace train. The dress was accented by a gemstone belt, a fingertip veil with beaded trim and a gemstone headpiece.

The groom and groomsmen wore deep teal suits by Indochino.

Flower girl was Kinsley Cameron, niece of the bride.

Ring bearer was Kenton Cameron, nephew of the bride.

Ushers were Travis Giguere and Frankie Pietrantonio, friends of the groom, both of Green Bay, Wis.

Music for the ceremony was provided by a string quartet organized by cellist Nicole Nolan, friend of the bride. The processional was “Largo in Winter” by Vivaldi. Caroline and her father walked down the aisle to “Canon in D” by Pachelbel. “Over the Rainbow” by Arlen was played during the sand ceremony. “Marry You” by Bruno Mars was played for the recessional.

Following the ceremony, the wedding party and immediate family of the bride and groom gathered at a table overlooking the Menomonee River and witnessed the signing of the marriage license with a champagne toast to follow. The bridal party boarded a party bus and visited various locations for pictures.

A reception was held at Pine Grove Country Club in Iron Mountain. Following a cocktail hour, guests were seated and the wedding party was introduced as they danced in to the head table. The bride and groom had a separate sweetheart table that overlooked the guests. As salads were served, a video of the couple’s love story was shown, followed by champagne toasts and speeches from the maid of honor, best man, and father of the bride. The groom stood and thanked all of the guests for coming from locations all over the U.S. A blessing was given by the groom’s uncle, Bruce Beifuss. A sit-down plated dinner with two delicious varieties of wedding cake followed.

Following dinner, guests enjoyed live music provided by the Bluewater Kings band from Chicago. Father and bride enjoyed the first dance to “Sweet Caroline” by Neil Diamond. Mother and groom danced next to “My Wish” by Rascal Flatts. Then the bridal couple shared a choreographed dance to the Shania Twain mash-up “From This Moment On” and “You’re Still the One” by Caleb and Kelsey.

The groom’s grandfather, Walter Tuchowski, had one last wish, to see his grandson get married. He made it but sadly passed away in October 2019.

The bride and groom honeymooned in French Polynesia and visited the islands of Tahiti, Mo’orea, and Bora Bora.

The groom is a 2009 graduate of Kingsford High School, a 2014 graduate of Central Michigan University and a 2016 graduate of Baylor College of Medicine’s prosthetic and orthotics program. He is currently employed at Quorum Prosthetics.

Bay West LIFE group not meeting in April and May

IRON MOUNTAIN — The Bay West LIFE group will not meet in April or May due to the Bay College West campus being ...

CRIVITZ, Wis. — Northwood’s Apostolic Church of Crivitz has moved its services to “Facebook Live,” where ...

MILWAUKEE — At a time when social distancing is the new reality, it’s easy to feel alone and disconnected. ...

Dear Annie: My son is in his 40s and throws temper tantrums! Any little thing can set him off. It’s so bad that ...

Norway — Free food will be distributed at 4 p.m. Friday at the Crossroads Alliance church facility at 130 Odill ...