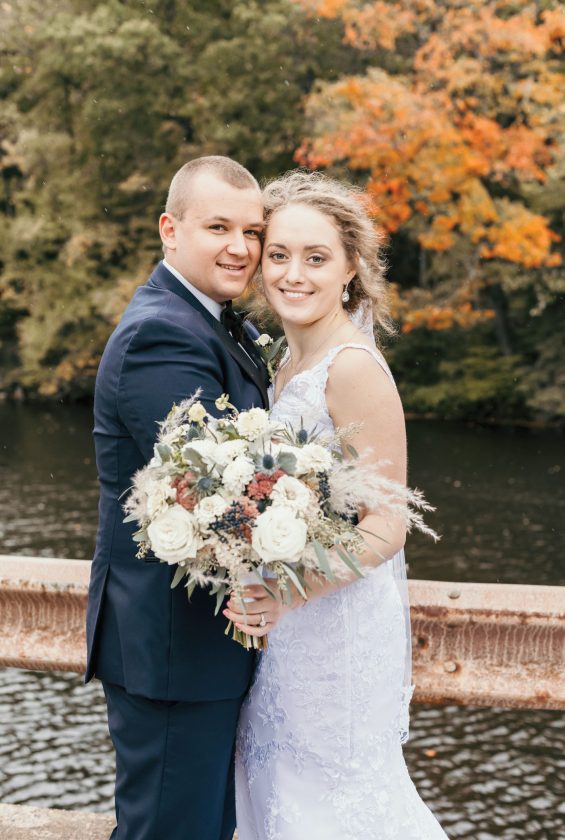 NEGAUNEE — Megan Kay Kangas and Joshua David Richards were united in marriage Saturday, Oct. 5, 2019, during a 12:30 p.m. ceremony at the beautiful St. Paul Catholic Church in Negaunee. Their marriage was officiated by the Rev. Larry Van Damme.

Megan is the daughter of Kevin and Mary Kangas of Norway. Josh is the son of David and Kathy Richards of Ishpeming.

The ceremony began with the bride’s parents walking down the aisle to “Ave Maria,” a song the bride’s late grandmother loved dearly. The groom’s parents and the rest of the wedding party then entered followed by Megan, who was given in marriage by her father, Kevin Kangas. She wore a classic white fitted Zamara dress by Maggie Sottero with beaded accents, long lace train and matching veil.

Megan, along with her bridesmaids, carried bouquets of dahlias, zinnias, hydrangeas and white roses, along with viburnum berries, seedy eucalyptus, and pampas grass. Similar arrangements, all created by the talented Jeff Heidtman, surrounded the altar.

Josh, along with his groomsmen, wore navy blue suits with matching bow ties by DuBois.

The groom’s cousins, Brenden and Daven Collins, served as an usher and as junior best man, respectively. Twins Azalea and Juniper Dahlman, friends of the bride, served as flower girls and wore matching pink dresses.

St. Paul’s music director, Marcia Hicks, performed music for the ceremony beautifully while the readings were done by the bride’s cousin, Jason Raiche.

After the ceremony, the wedding party braved the wind and cold and took advantage of the gorgeous fall colors in the Ishpeming and Marquette areas for pictures before their reception began at Northern Michigan University’s recently renovated Northern Center.

Guests enjoyed a cocktail hour prior to the arrival of the bride and groom and their wedding party. Accents of navy blue and pink filled the room while flowers and pictures of the couple decorated the tables. One significant decoration was the memory board made by the bride’s brother, Andrew. Its meaning became even more substantial as the groom’s grandmother, Shirley Juntila, passed peacefully that evening and joined the couple in spirit at the reception.

Once guests found their seats, the bride’s father gave a touching speech that found the newlywed couple fighting back tears. Maid of honor Morgan and best man Justin then spoke and had the entire room laughing. The groom’s mother then briefly spoke and provided everyone with a beautiful blessing before guests enjoyed a buffet style dinner. A three-tiered cake and cupcakes by Midtown Bakery served as a sweet treat for all to enjoy throughout the night.

Double Trouble DJ kept the night going with a variety of music and their very popular photo booth. The bride and groom started the dancing portion of the reception with their first dance as husband and wife. All eyes were on the couple as they danced to “Prayed For You” by Matt Stell. This was followed by the father/daughter dance, which had Megan and her father dancing to Heartland’s “I Loved Her First.” As they danced, a video slideshow made by the bride’s father played in the background. The next dance belonged to Josh and his mother as they danced to Rascal Flatts “My Wish.” The lyrics of the song were projected in the background, allowing all to sing along as they danced. The last pre-arranged dance came later in the evening when the bride and her grandfather, Paul Kangas, shared a special dance together.

The bride and groom were so thankful to have so many family and friends travel from all over to celebrate their special day with them. The couple resides in Negaunee, where they recently bought their first home.

A message well worth repeating

The Rev. MATTHEW D. RUESCH Pastor, Our Redeemer Lutheran Church Kingsford How do you get an important point ...

IRON MOUNTAIN — Michigan State University Extension is offering a series of Lunch and Learn presentations on ...

NORWAY — Free food will be distributed at 4 p.m. Friday at the Crossroads Alliance church facility at 130 Odill ...

KINGSFORD — The Dickinson Conservation District is conducting their native wildflower sale. The district ...

Dear Annie: My husband and I have been married for 43 years. I have a good life, or so I thought. I recently found ...