Fourth day of protest in Madison shuts down state highway 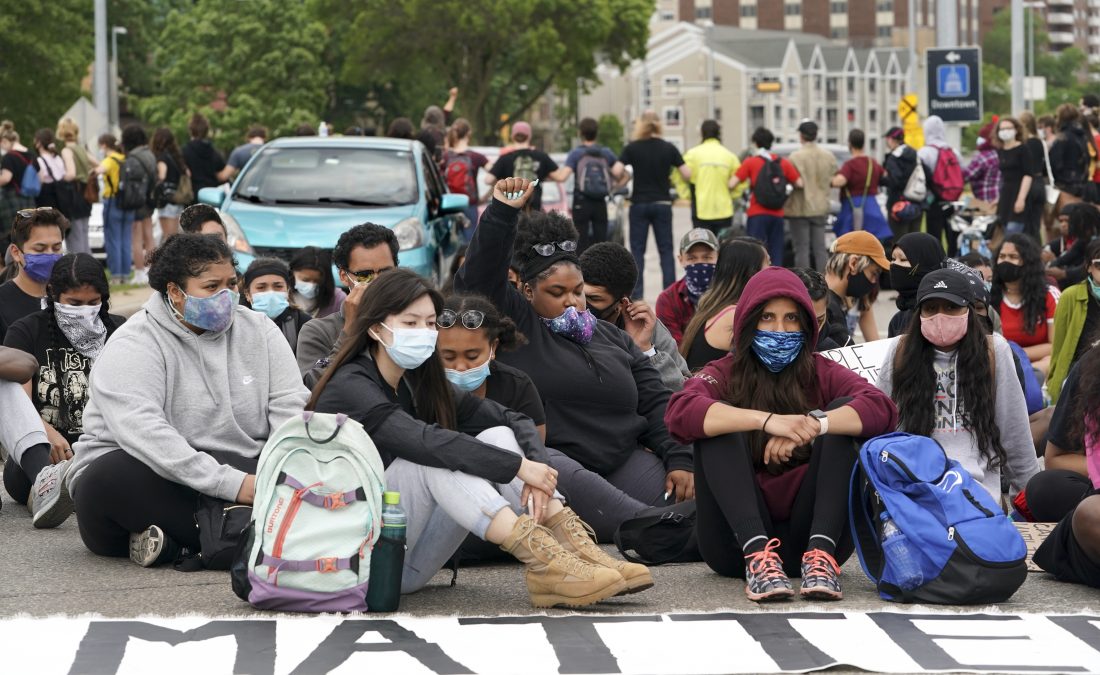 Protesters take part in a "sit-in" part of a protest on a closed road Monday, June 1, 2020, in Madison, Wis. Several hundred protesters marched along Madison streets and blocked all six lanes of John Nolan Drive as part of what they say will be a week of action against police brutality and "white supremacy." (Steve Apps/Wisconsin State Journal via AP)

MADISON, Wis. (AP) — Protesters shut down a six-lane state highway that feeds into downtown Madison for a second day on Tuesday, as Gov. Tony Evers called for the Legislature to pass a law to reduce the use of police force and urged a united battle against racism.

The latest actions came after a third night of violence gripped downtown Madison, with protesters spraying graffiti on the state Capitol and nearby buildings, dumping paint on the beloved “Forward” statue and breaking into boarded up businesses. Police in riot gear used tear gas to disperse the crowd.

Madison, the liberal state capital with one of the deepest racial divides in the nation, has been a flashpoint for protests over the killing of George Floyd. Floyd, a black man, died after a white Minneapolis policeman pressed his knee into Floyd’s neck for minutes, even after he stopped moving and pleading for air.

Evers, in a video message released Tuesday afternoon, urged calm and unity. The Democrat condemned “all those who encourage violence against black lives” and urged systematic change to fight racism. He did not speak directly to Republican criticism that he hasn’t done enough to quell the violence.

Evers called on the Republican-controlled Legislature to pass a Democratic-sponsored bill that would require law enforcement agencies to minimize the use of force and prioritize preserving life. He also called for local government leaders to join the call for change. The bill died when the Legislature adjourned its regular session earlier this year.

Meanwhile, workers boarded up storefronts near the state Capitol and University of Wisconsin campus that have borne the brunt of the vandalism since Saturday night, to ward off any more destruction.

“I have seen hope in those who’ve joined this cause in support, who’ve lent a hand to a neighbor, who’ve showed up with brooms and dustbins in hand to help clean up our neighborhoods,” Evers said. “We must use this dark moment to begin to be an example for the rest of the nation. … Please be kind to each other, support each other, and keep each other safe tonight and in the days ahead.”

For a second day in a row, hundreds of protesters blocked traffic on John Nolen Drive, a state highway that feeds into downtown Madison. Traffic was stopped early evening on Monday in a peaceful protest and marchers were replicating their action Tuesday afternoon.

Things turned violent in Madison late Monday night into Tuesday morning. Police said around 1 a.m. that someone fired a handgun in the air, two men were beaten with a crowbar and others attempted to light Molotov cocktails. Madison Police Chief Vic Wahl said in his blog that multiple police officers were struck with rocks and projectiles.

Protests late Monday in Milwaukee remained peaceful. Milwaukee Police said before the protest began that they had arrested 109 people the previous two nights for curfew violations.

Madison police said 15 people were arrested Monday night, bringing the number of arrests since Saturday to at least 32.

The Capitol has increasingly become the target. A four-letter expletive was painted in large red letters on the building Monday night.

Graffiti painted on the state veterans museum, the “Forward” statue and nearby sidewalks and boarded-up storefronts said: “We had enough,” “Where is our museum?” and “Do you hear us?”

Criticism from Republican state lawmakers over Madison’s handling of the protests escalated Tuesday.

Several lawmakers retweeted photos of the vandalized “Forward” statue. It was first installed 125 years ago, but replaced with a bronze replica in 1998. It is placed prominently outside the Capitol, facing the University of Wisconsin campus and the street lined with bars, restaurants and small businesses that have been the target of much of the vandalism since Saturday.

“When does it end?” Steineke tweeted. “When are you going to put a stop to this? Without a massive police presence (with actual arrests), this is your ‘new normal’.”

Rhodes-Conway has condemned the property damage and violence, but also said that frustration should instead be directed at how black people are treated. 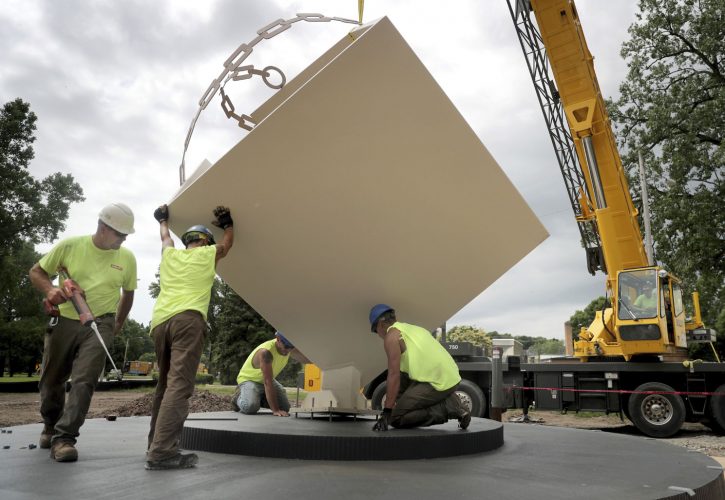