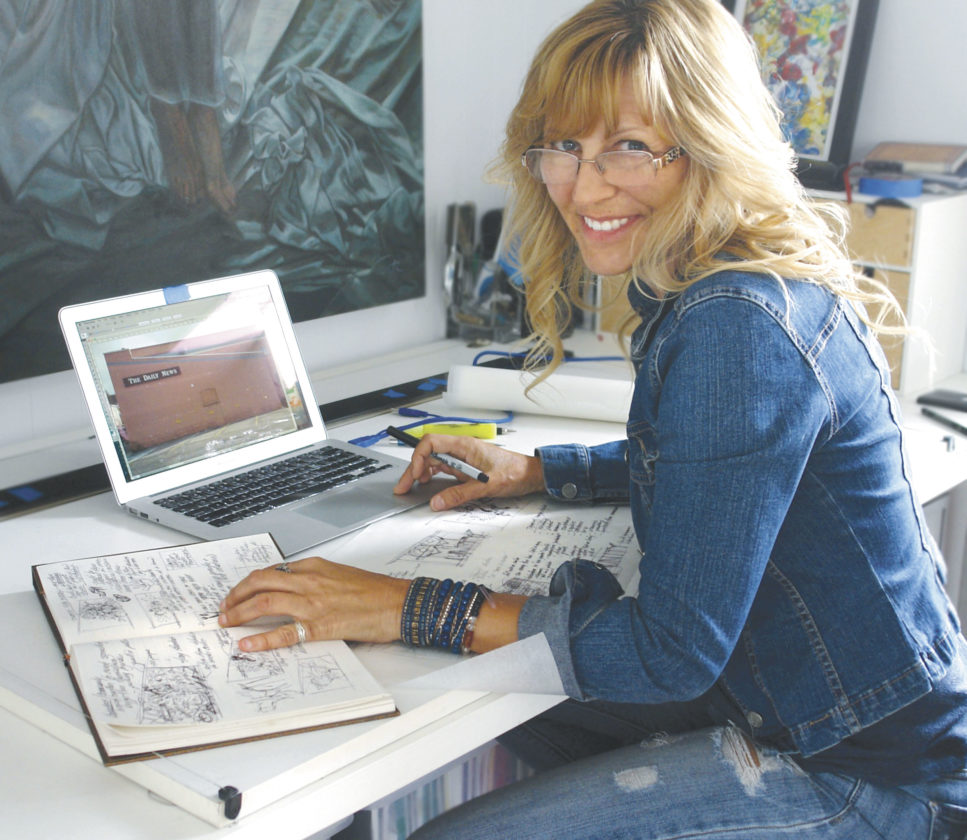 MIA TAVONATTI WORKS on a mural design based on the word “community” at her California studio. The mural is expected to be put on The Daily News’ building in downtown Iron Mountain in June after donors to an online fund drive contributed more than $13,000 for the project in a matter of weeks.

IRON MOUNTAIN — The Power of Words has proven itself, thanks again to “community.”

A drive to raise $10,000 for a second wall mural in downtown Iron Mountain not only reached the intended goal but shot past it, generating more than $13,000 in just a few weeks of fundraising.

The online fundraising effort managed to hit the $10,000 mark April 20, eight days before the MEDC deadline. It eventually drew $13,063 from 99 donors through the Patronicity website.

“The Patronicity website allowed us to involve our community through the fundraising process in a whole new way. I have been blown away by the number of online votes and online donations we have received for this project. The community of Iron Mountain has truly come to together to make this project happen and I could not be prouder,” said Paula Craven, program director for the Iron Mountain Downtown Development Authority, which is sponsoring the project along with Ogden Publishing and in conjunction with the Svelata Foundation..

The second mural is slated to be painted in June on the west facade of the Daily News building at 215 E. Ludington St. in Iron Mountain.

The majority of about 1,700 votes online chose the word “community” as the theme from among 20 words nominated for the project. The word was suggested by local resident Nikki Knueppel.

Artist Mia Tavonatti, an Iron Mountain native, now is designing a mural based on that word in her California studio.

She and her team of professional muralists, local artists and students on scholarship then will work in June to put up the artwork, which the Svelata Foundation and the Iron Mountain DDA estimate will cost about $30,000.

It continues Tavonatti’s Power of Words Project, designed to engage and inspire the public to participate in the creative process by selecting a word that defines the vision they hold for the future of their area.

“I would like to thank all 100-plus donors who have contributed to the Power of Words Project murals so far … this will make it possible to take this project to the next level, not only in the work we can accomplish now, but also with the support we can attract in the future as we seek to expand onto additional locations,” Tavonatti said.

This second Power of Words Project mural also has received a $5,000 Prosperous Places mini-grant, which is supported by the Regional Prosperity Initiative of the Central Upper Peninsula Planning and Development Regional Commission, or CUPPAD.

The project benefits as well from the support of the Michigan Council for Arts and Cultural Affairs and the National Endowment for the Arts.

For more information about the project, or artist and scholarship opportunities, go to the Power of Words Project website at www.powerofwordsproject.org or contact Mia@miatavonatti.com.

“Turns out, this community is full of creativity,” Tavonatti said, “and I have every intention of tapping those talents.”