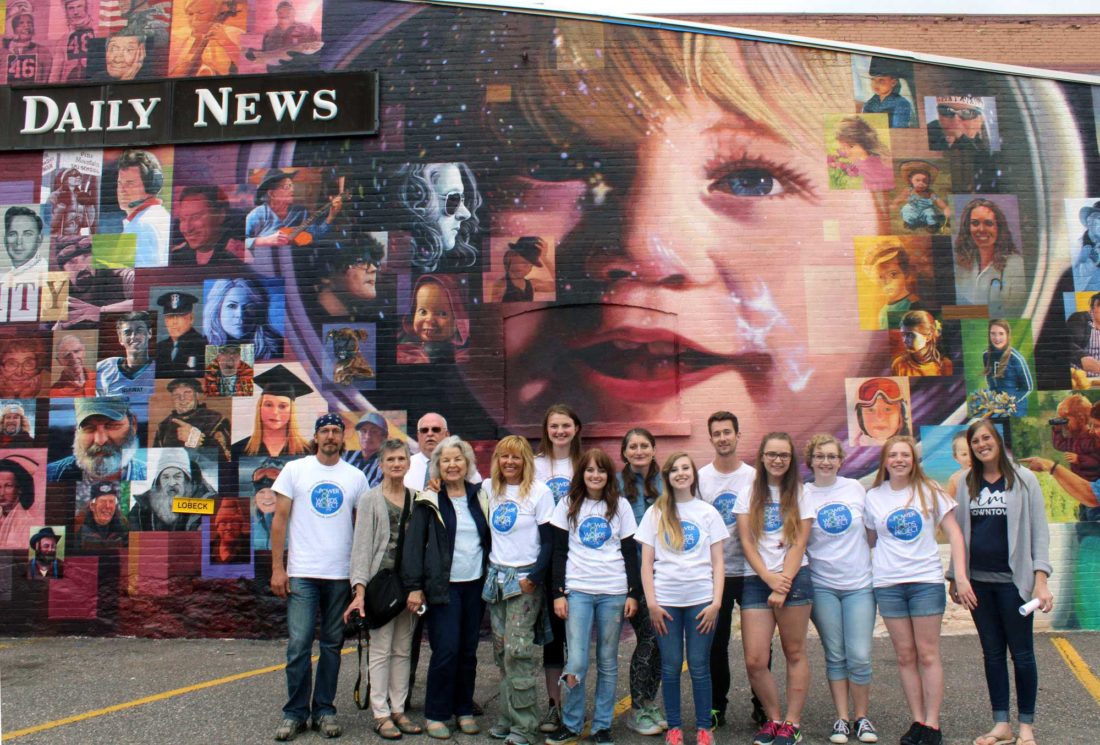 IRON MOUNTAIN – The potential of our community begins in the eyes of a child.

To illustrate the word “community,” Tavonatti and her team painted portraits of about 80 people from the region, with a larger image of a young child in an astronaut helmet in the center.

Although the other figures in the mural are based on real people, the child represents a metaphor, Tavonatti said.

“It’s every child; it’s not suppose to be any one particular person. It’s a symbol of the potential of the community. The whole piece about the community pouring itself into the future, whether it be our children or whatever,” Tavonatti said. “The Power of Words project isn’t about the past or the present — it’s about what you want in the future for the community. What’s better than sending your children to the stars?”

Despite a tight deadline and uncooperative weather throughout the month, the mural managed to come together by the June 30 target date.

Tavonatti admitted the torrential downpours and 50 mph winds did make it more difficult but she never feared she wouldn’t complete the project.

“I designed the mural in a way that I could edit. I took all the photographs and enlarged full size in California so we could glue them to the wall with mural paint or we could paint them in our studio. So when it really rained, we had people in the studio working on paintings and then we would glue them up and finish them on the wall,” she said.

Including the community into the process was important to Tavonatti. “I was trying to get as many families into the mural as possible, so somebody knows somebody who knows somebody. It’s pretty much about second degree of separation,” she said.

Tavonatti, creator of the Svelata Foundation, began the Power of Words Project in 2013 on the west wall of Blackstone Pizza on East Hughitt Street. Tavonatti created that mural around the word “believe,” which the community had chosen as the theme.

An online vote again was used to select “community” as the theme for the second mural. Thousands of people voted for both projects and a Patronicity crowd-funding campaign encouraged public donations matched by the Michigan Economic Development Corporation.

Growing up in an artist family, Tavonatti wants to build appreciation for art, so she gave nine students scholarships to help work on the mural.

“I grew up in my dad’s art store. It’s all about showing these kid that working in the arts is very do-able. I heard it too many times — that I can’t make a living in art — and it’s just not true,” Tavonatti said.

Paula Craven, program director for the Downtown Development Authority, was pleased with the finished artwork.

“The finished project really represented what the DDA is all about. We want a vibrant downtown and we want to do that through beautification and I don’t think there is a better way to it than through art,” Craven said.

Tavonatti has plans for more murals on other buildings in the downtown area in the future. “This is only number two in a long series and we are hoping to raise enough money to do at least nine more,” Tavonatti said, adding, “I have a thing for the number 11. I already have my walls picked.”