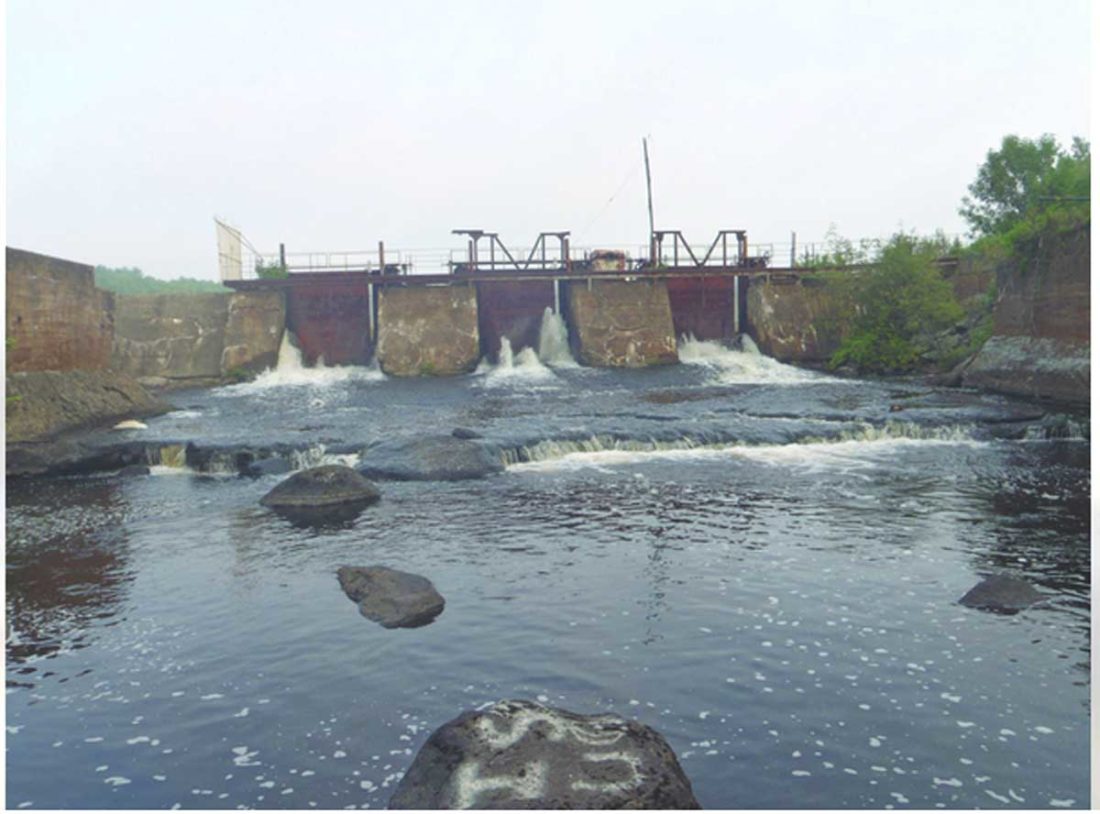 Water spews out of holes in the closed gates of the Republic Dam in June. Over the last few decades, the gates have fallen into disrepair, one of several issues surrounding the operation of the structure, which controls the flow of water into the Michigamme River Basin. The Michigan Department of Environmental Quality announced a 20-day public comment period of a completed permit application from the Michigamme River Basin Authority to repair and operate the dam. The MRBA is also seeking a grant to refurbish the gates, and have signed a lease with the owner of the dam.

REPUBLIC — The historic Republic Dam is one step closer to being fully operational after falling into disrepair over several decades.

“The requisite public notice for proposed lift gate repairs and seasonal operation of the dam to facilitate upstream recreation and Republic’s annual fishing tournament has been issued,” McCone said in an email on Friday.

The authority is proposing to repair or replace and reinstall the three existing steel lift gates in the structure and — from June 1 to Sept. 1 — “operate the dam gates seasonally to facilitate up stream recreation and an annual fishing tournament,” the DEQ notice states.

Members of the general public have 20 days to submit comments to the DEQ regarding the proposed project and local units of government have 45 days, McCone said.

“The DEQ will review submitted comments,” McCone said, “provide those that are substantive to the applicant for response, and take into consideration both the substantive comments and the applicant responses when making a permitting decision following conclusion of the public noticing period.”

The authority and the Republic Sportsman’s Club entered into an agreement with dam owner, Republic Mountain Lake LLC on Jan. 15 to lease the structure for $100 per year for five years. The lease includes an option to purchase the dam for $50,000.

The agreement enabled the authority to apply for a $100,000 Michigan Department of Agriculture and Rural Development grant to repair the gates, according to an authority newsletter, but the lease is null and void if the authority does not receive the grant.

The Republic Sportsman’s Club has committed to provide the $30,000 match for the grant, which would be awarded at the end of March, said Jim Brennan, authority chairman.

The project will ensure that the basin can stay at the level it had been kept at for 140 years and will “keep property values up,” the newsletter states. “It will also benefit any future mining operations, and economic value for recreational use.”

Brennan said the gates have already been removed from the structure and the organization expects to get word on the grant by the end of March.

No township tax dollars have been used to fund the authority or the project itself, the newsletter states.

“The (authority) is its own entity. Its purpose is for the economic development of the water. The Republic Township Board under act 94 of 2008, appoints the (authority) board, and approves the budget,” the newsletter states. “At no time are taxes from the township used to fund the (authority).”

According to the permit, people wanting to make written comment on the proposed project should submit them to the MDEQ Upper Peninsula District Office at 1504 W. Washington St., or online at miwaters.deq.state.mi.us/miwaters/#/external/publicnotice/search. Search for the public notice by location or applicant name and view by clicking the “documents” tab, click the “add comment” tab to send a comment electronically. A hard copy of the DEQ notice may be requested by calling 906-228-4853.

Lisa Bowers can be reached at lbowers@miningjournal.net.