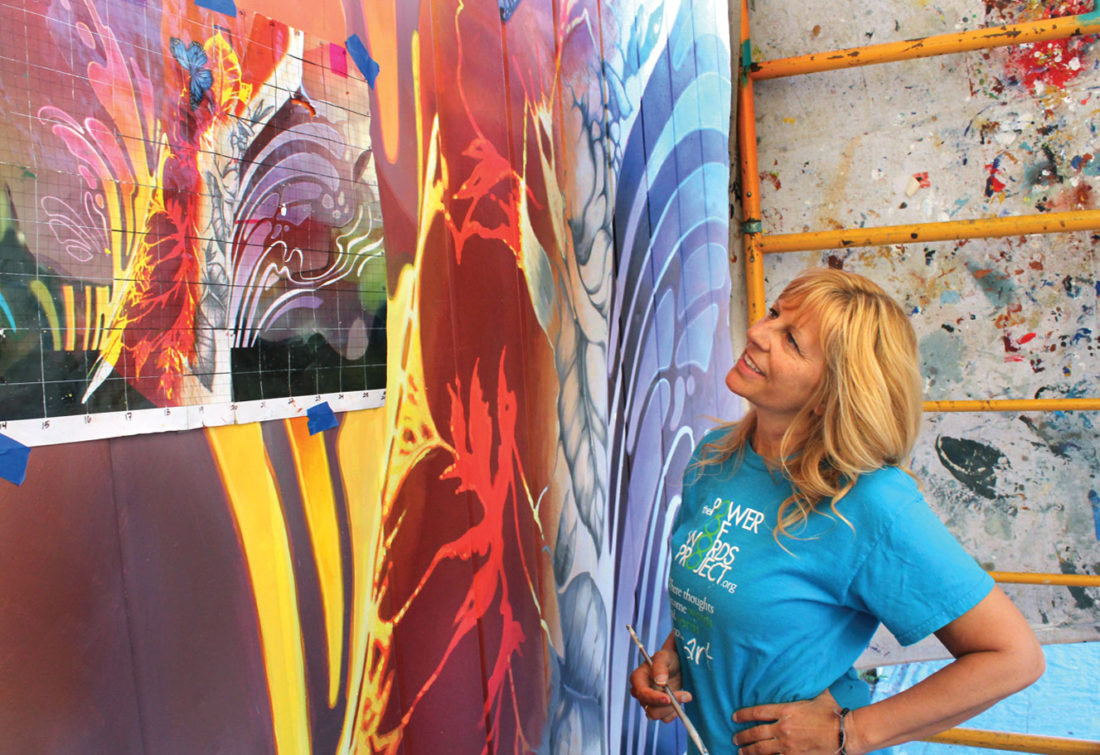 Artist and mural designer Mia Tavonatti puts the finishing touches on her third mural in downtown Iron Mountain. The “Inspire” mural on the west facade of the Sikora Sheet Metal building at 216 E. Hughitt St. is the first of three works planned for this summer. (Theresa Proudfit/Daily News photo)

The Power of Words Project, she says, is all about that vision for the future.

Tavonatti this summer is helping to “inspire” that message of “hope,” and “welcome” more emotion into the community with three new murals being done in the downtown.

“In most of my work, I try to design things that are not so obvious. They are not literal, because I want everybody who experiences the work to bring their own meaning to it. I’m trying to create an emotional experience,” Tavonatti said.

That appears to be working, because after the “Believe” mural went up in 2013, Tavonatti began receiving letters from people in the community who said they had been moved by the mural.

“Very intimate letters,” she said, “from people telling me how their relationship has changed with the imagery.”

One of Tavonatti’s goals is to bring more people into the downtown area.

“The parking lots are these big voids, with so much potential because they are that space between all your great streets and they need to be linked together,” Tavonatti said. “I’m trying to use the murals as this connective tissue in the spaces. Also, most of them are visible from Stephenson and I want to pull the eye off Stephenson and get them to come around and come back in.

“And it’s happening,” she said, adding that two people from Menominee came up just to see the murals.”

They are just a few days away from finishing the “Inspire” mural on the west facade of the Sikora Sheet Metal building at 216 E. Hughitt St. and then will begin work on the “Hope” mural on the north-facing wall of Greenway Books at 527 S. Stephenson Ave.

Tavonatti said they are much better prepared for weather variations this year, after dealing with many rainy days while doing the “Community” mural on The Daily News building in 2017.

“I brought 50 clamps and ordered all new white tarps to protect us from the sun and the rain. You can’t paint on a hot wall because it reduces the adhesion so you want to be in the shade,” Tavonatti explained.

Tavonatti said the “Inspire” mural is similar to working on the “Community” wall.

“It’s smaller in size, but it seems to get bigger every day,” Tavonatti said. The team is a couple days behind schedule, she said, but her sister, Tara Tavonatti, has joined them “and she is really good and really fast.”

Mia Tavonatti is finalizing the design for the “Welcome” mural that will be on the south wall of the 535 S. Stephenson Ave building. They still intend to have all three murals completed by early July, as they plan to leave July 6.

“So I’m hoping to finish on the Third,” Tavonatti said, “so I can have fun on the Fourth.”

Tavonatti said her work contains a lot of metaphor and the “Inspire” mural will represent “the complexity of the different aspects of inspiration.” The design deals with multiple facets of inspiring someone, being inspired and the process of inspiration.

Her description of the mural is:

“The hand in the middle with the finger is the spark; it’s the action. It’s that thing or that person that causes the inspiration. The finger is actually the I in Inspire. On the arm is a tattoo. It goes from a single black and white into full color and is coming to life and unraveling and coming into form. That tattoo is the idea; it’s that thing that we have with us all the time and it’s permanent, like a tattoo. But it’s coming to life and starting to evolve and form other things, particularly butterfly patterns on the flower petals. It’s all kind of meshing and growing outward. Evolving. Then, the butterflies basically escape. The rose is a symbol of the soul — inspiration comes from that place within us that is very deep, and the butterfly is a symbol of transformation. So they are released. When we are inspired or when we inspire others, it goes out into the world. It affects others.”

Although the Power of Words Project has enough money to get them through this year and next year, they are continuing to apply for grants to continue the work. Tavonatti previously said she had at least 11 buildings in mind for the downtown area. An Art Place Grant or National Endowment of the Arts grant would mean more murals in the coming years.

The regional expansion of the Power of Words Project included Manistique this year and plans to add Gladstone next year.

“By the end of next year, we will be in three counties,” Tavonatti said.