This fledgling northern saw-whet owl recently spent some time at wildlife rehabilitator Phyllis Carlson’s home in Quinnesec. It was successfully released back into the wild within days. (Phyllis Carlson photos)

An almost mature northern saw-whet owl shows the streaks, spots and whiter face that distinguish it from juveniles. 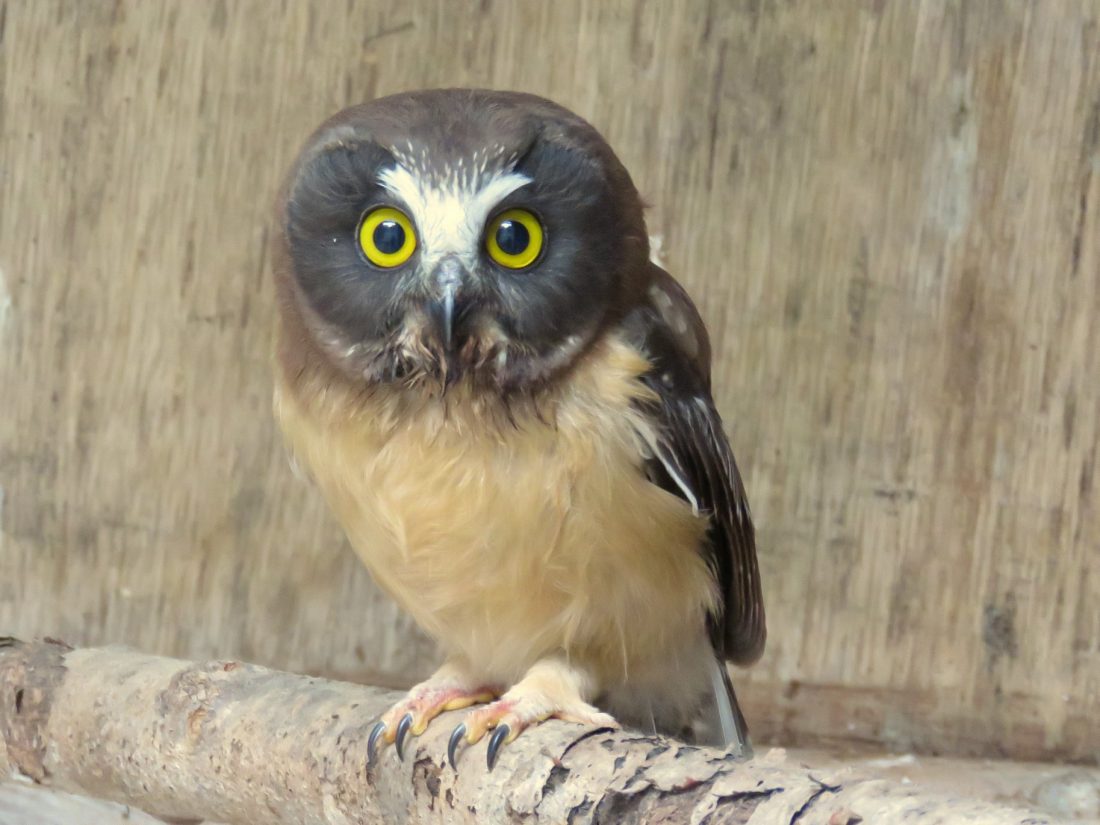 This fledgling northern saw-whet owl recently spent some time at wildlife rehabilitator Phyllis Carlson’s home in Quinnesec. It was successfully released back into the wild within days. (Phyllis Carlson photos)

An employee at Pine Grove golf course can take pride in likely saving a fledgling of our smallest native owl species from being a “murder” victim.

Mario — and I apologize, as I was unable to get his full name to give him full credit — came across a northern saw-whet owl on the course in late June as it was being mobbed by crows, area wildlife rehabilitator Phyllis Carlson said.

She pointed out that a group of crows is referred to as a “murder” — and that’s probably what would have happened to the robin-sized owl had Mario not come to the rescue. Crows are opportunistic and will eat something as vulnerable as a fledgling if they can, especially at a time when they might be feeding young of their own.

Not knowing if the bird was injured, Mario brought it to Almost Home Animal Shelter, which called Carlson.

She feared the bird’s dilated pupils might be a sign of West Nile virus, but the tiny owl came through the first night in her home none the worse for wear, she said. Given fluids and some tasty pieces of rat, it ate well and remained feisty, nipping and taking swipes at Carlson with its taloned feet. 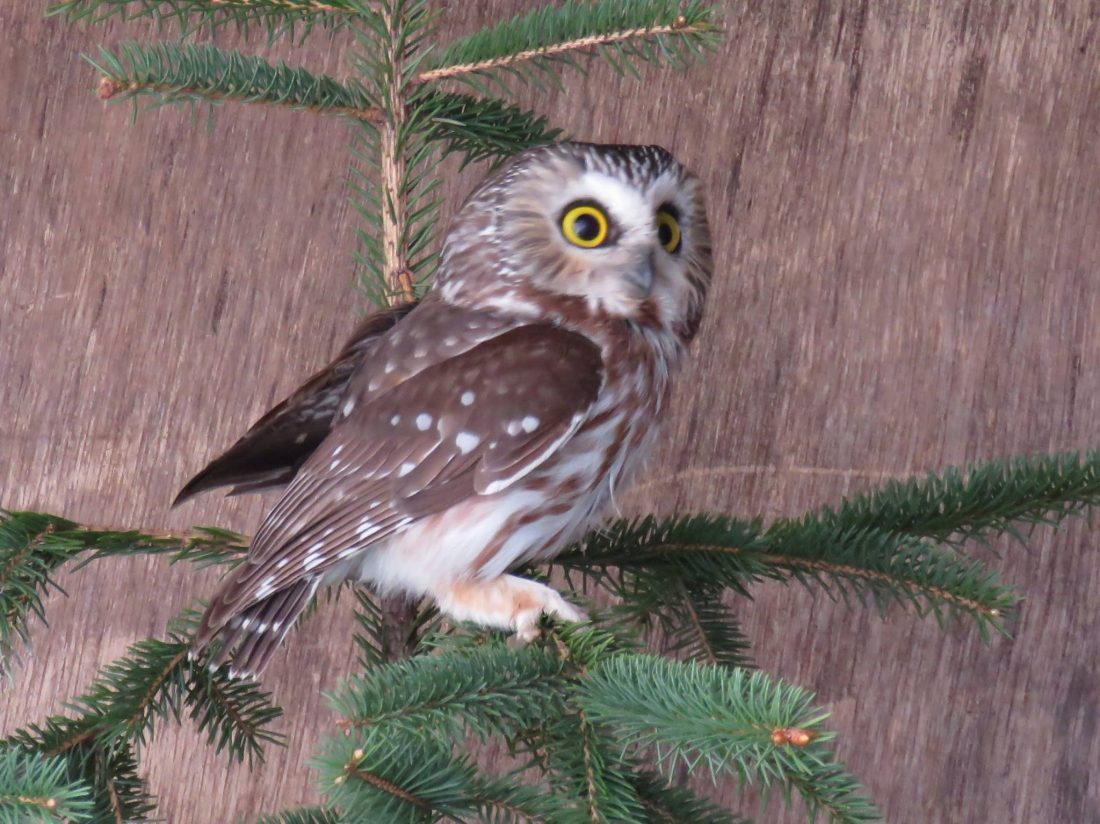 An almost mature northern saw-whet owl shows the streaks, spots and whiter face that distinguish it from juveniles.

So Carlson decided the best place for the owl was to put it back on the golf course, to hopefully reconnect with a parent that could better teach it how to hunt than any human. Claims the bird will be rejected if handled by humans are untrue, she said, adding that great horned owls regularly demonstrate they have little sense of smell by targeting skunks.

She and Mario set the young saw-whet loose where it had been found in the early morning of June 28.

She can only remember a couple previous instances that she’s hosted a juvenile saw-whet. But she has gotten calls in the past from people sure they’ve discovered a new owl species, because young saw-whets look very different from the adults.

While mature saw-whets have a streaked belly and chest, mostly white face and some back and wing spotting, the juveniles lack most of the white markings — except bold white eyebrows that make them look very stern. The belly and chest is solid reddish brown, the face and back chocolate.

Saw-whets are cavity nesters, often co-opting holes opened by pileated woodpeckers and flickers. They will use nest boxes if available as well, according to the Cornell Lab of Ornithology’s All About Birds website, www.allaboutbirds.org.

The tiny owls will snatch up insects and smaller birds when available but primarily hunt mice, voles and other small rodents.

While the saw-whet likely is our third-most common owl, behind the great horned and barred, Carlson said its strictly nocturnal habits and preference for more secluded habitats such as cedar swamps means they can be tough to see.

They do have a distinctive calls that can indicate they’re in the neighborhood, though Carlson said she’s heard one only once: a string of “too-too-too” whistles that sound a bit like the warning beeps of a large vehicle backing up.

She wishes the best for the young owl. Being able to return it quickly to the wild, apparently heathy, “was one of those, far as I’m concerned, great outcomes for rehabilitators,” Carlson said.

A fair number of birds are fledging right now — some, such as robins and chickadees, may be on a second brood for the year, Carlson said.

Since these fledglings are still learning how to get around, they can wind up on the ground or in an otherwise vulnerable location. Earlier this week, she had to carry a young brown thrasher to safety after it ended up in the middle of a street.

But in most cases, these fledglings are better off without human intervention or just a brief bit of help, Carlson said.

One place where these young birds could use humans looking out for them is when mowing lawns, she said. Watch for heads poking out of the grass or the adults hovering nearby.