Fishing line no friend to wildlife

A belted kingfisher, rescued after getting entangled in fishing line at Way Dam, failed to survive. (Theresa Proudfit/Daily News photos)

No fish to be caught at this height at Lake Antoine, but it could be a deadly encounter for anything feathered. 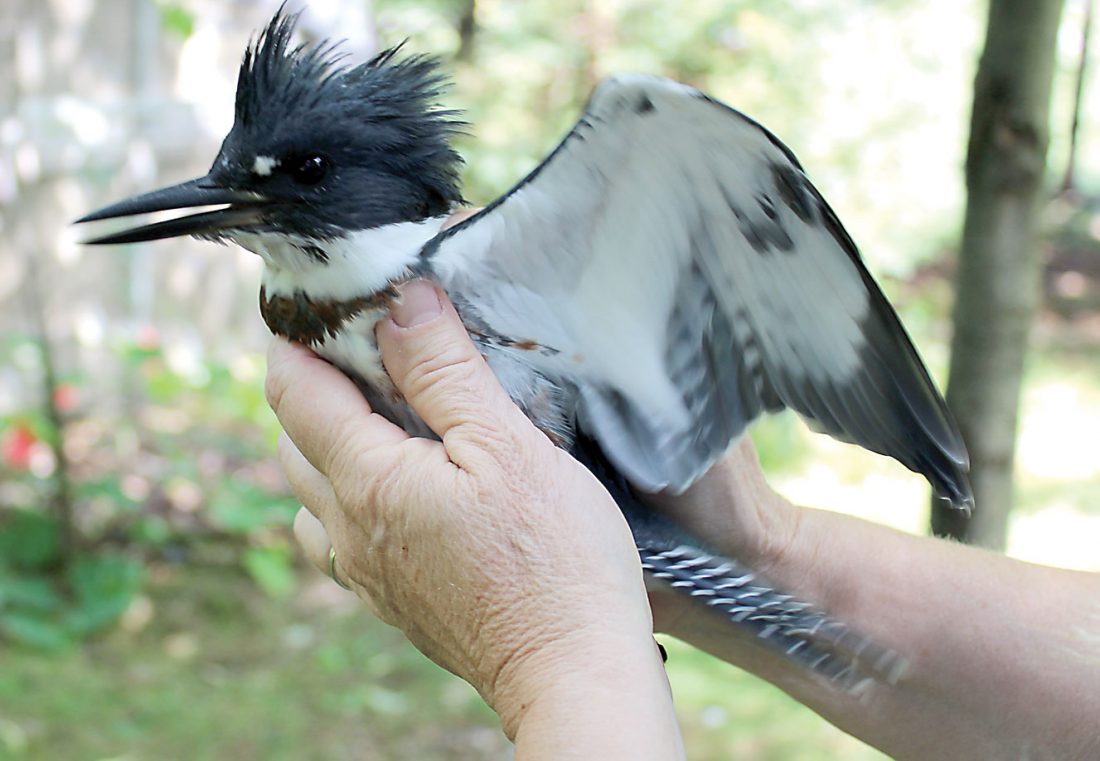 A belted kingfisher, rescued after getting entangled in fishing line at Way Dam, failed to survive. (Theresa Proudfit/Daily News photos)

A warning: This column doesn’t have a happy ending. But maybe that will make people stop and think about what they leave behind when fishing.

A couple reportedly from the Chicago area, vacationing at Way Dam, saw what they thought at first was a woodpecker in a tree. It instead was a belted kingfisher, dangling and hopelessly tangled in a length of fishing line in the branches.

They were able to get the bird down and to a veterinary clinic. While nothing appeared broken, the line had looped around the elbow joint in one wing, leaving it swollen and the bird unable to fly.

Wildlife rehabilitator Diane Allbaugh of Kingsford first got the kingfisher, then turned it over to Phyllis Carlson of Quinnesec. Though she had hope a few days’ rest would let the wing swelling subside, the bird was unwilling to eat and trying to force feed it ran the risk of stressing it further.

Friday morning, Carlson found it dead at the bottom of the enclosure. 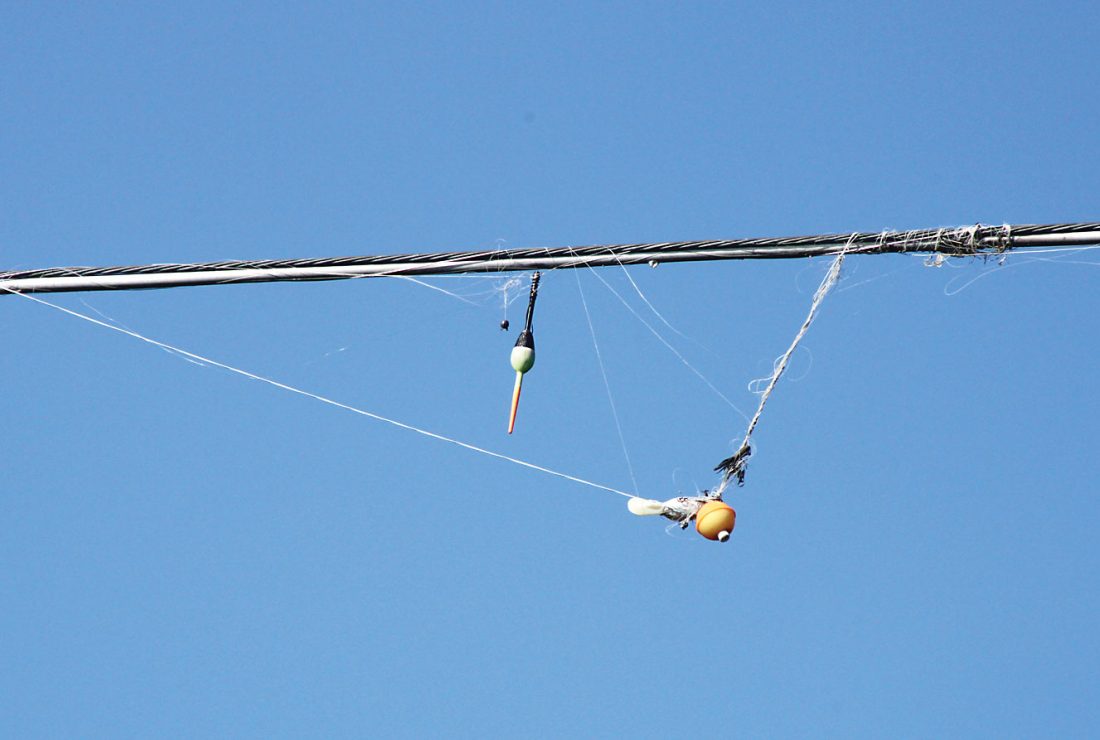 No fish to be caught at this height at Lake Antoine, but it could be a deadly encounter for anything feathered.

The sad irony of this story — that one of the masters of fishing in birds ended up losing its life due to a less than adept human fisherman — was compounded by the fact Carlson had two other reports in the same week of animals carrying around snarls of fishing line. Both were seen at Lake Antoine; a deer, and a Canada goose with a foot encumbered enough it’s having trouble walking.

Carlson on Thursday tried to coordinate a crew with nets to perhaps corral the goose, but it was a no-show. (Yes, the phrase “wild goose chase” was used.)

Park staff said they got close Friday morning — the goose hangs out with others of its kind on the beach area — but the bird still can fly well, so evaded capture.

Park staff now are armed with nets and Carlson has a bag assembled with scissors, pliers and other tools so she can respond quickly if the goose is captured.

But she’s frustrated by the carelessness of anglers. While searching for the goose Thursday, she noticed overhanging wires decorated with hanging bobbers and line. One person with her called it “poor” — not the word used but this is a family column — casting, but you have to wonder, given the height, whether someone just thought it would be a fun challenge to get a line over the wire.

Roughly a week earlier, after capturing the starving juvenile great blue heron just off the Big Pine Resort beach at Hamilton Lakes, she later found a treble hook lurking in the lake muck in her net. This, mind you, is a place where children regularly swim and wade.

Bad casts, encounters with weeds, lines that break in inaccessible places, that’s definitely a part of fishing, Carlson acknowledged. But some of it is simple carelessness — trying to drop a line into a spot that has obvious snag hazards if overshot. As Carlson noted, “How about recognizing there’s trees … and not casting there?”

When coupled with an unwillingness to then try to retrieve the equipment, it sets the stage for catching something completely unintended. That hook and clear filament line will last a long time, waiting for something unlucky enough to get ensnared.

Fishing line can tighten enough to cut into flesh, cut off circulation to limbs, wind under tongues or around bills to make feeding impossible. For the animal, it’s a slow death from starvation, thirst or infection, unless a predator notices its plight and makes the end quicker.

Carlson heard of a horrifying case in the Minocqua, Wis., area of a bald eagle that got a treble hook caught in a nostril. Trying to free itself, it ended up with a foot hooked to its beak. It eventually drowned, toppling into the water after growing too weak to stand, Carlson said.

As I said, this is not a cheerful column.

But if it can convince anglers to think twice before casting toward trees or snags, to retrieve what they can when gear does get caught up rather than just cut the line, to perhaps even collect other carelessly discarded equipment they might come across — “every time I go kayaking, I come back with all kinds of stuff,” Carlson said — well, maybe there’s a better ending to be had.