JOHN “JACK” RALSTON, who moved to Norway at age 10 and graduated from Norway High School in 1944, went on to coach football at Stanford University, winning two Rose Bowls, and the NFL’s Denver Broncos from 1973 to 1976, leading that franchise to its first winning record in his first season. Ralston died Saturday in Sunnyvale, Calif., at age 92.

Former Stanford coach John Ralston is carried off the field by his players after they defeated the Ohio State Buckeyes in the Rose Bowl game Jan. 1, 1971, in Pasadena, Calif. Ralston, who also coached the Denver Broncos, died Saturday in Sunnyvale, Calif. He was 92. (AP Photo/File) 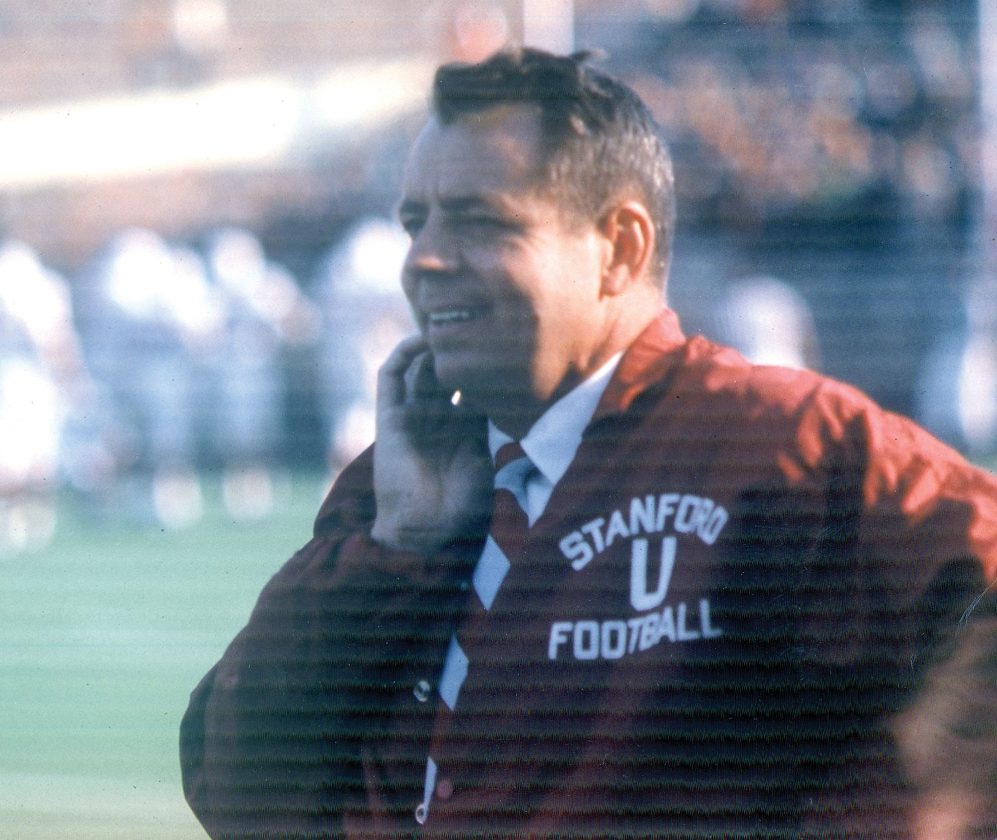 JOHN “JACK” RALSTON, who moved to Norway at age 10 and graduated from Norway High School in 1944, went on to coach football at Stanford University, winning two Rose Bowls, and the NFL’s Denver Broncos from 1973 to 1976, leading that franchise to its first winning record in his first season. Ralston died Saturday in Sunnyvale, Calif., at age 92.

He became fascinated with the game of football, trying to learn as much as he could about the game. While playing alone, he would try to simulate scoring plays, setting up imaginary offensive and defensive players. He dreamed of being a football coach someday, according to information presented at John Ralston Day in Norway in July 2008.

After playing on the junior varsity team for three seasons, Ralston broke through and made varsity as a senior. He was a hard-nosed guard despite being only 165 pounds, earning All Menominee Range honors in 1943. 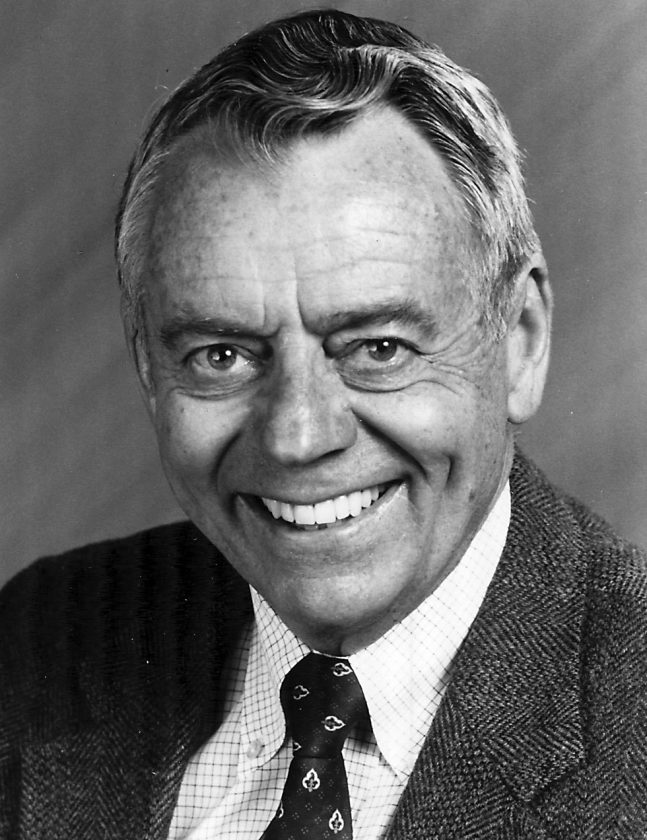 “When I was a senior (fall of 1942), he was so small but worked as hard as he could. (Alan) Ronberg kept him on the JV team, though,” Hamlin said. “Basketball, he made the team as a junior, but Ronberg didn’t use him enough, in my opinion.”

After graduating in June 1944, Ralston joined the Marine Corps, serving in the South Pacific during World War II.

Two years later, he went to the University of California-Berkeley, playing football under coach Lynn “Pappy” Waldorf. Ralston was a linebacker on two Rose Bowl teams while earning a physical education degree in 1951. That year was also when he met his wife, Patricia Ward, from Nebraska. The couple had three children, a son and twin daughters. Patricia died in December 1997.

His coaching career began in 1952 at San Lorenzo High School in San Lorenzo, Calif., then in 1953 and 1954 as an assistant coach at Mount Diablo High School in Concord, Calif. Coach Waldorf brought Ralston back to Cal in 1955 as an assistant coach, a position he kept through the 1958 season. Cal appeared in the Rose Bowl after that season, and hasn’t been back since.

In 1959, he became head coach at Utah State University. Ralston went 31-11-1 in four seasons at the helm at Utah State, leading them to two bowl games. Pro Football Hall of Fame defensive lineman Merlin Olsen played under Ralston during his time at Utah State. 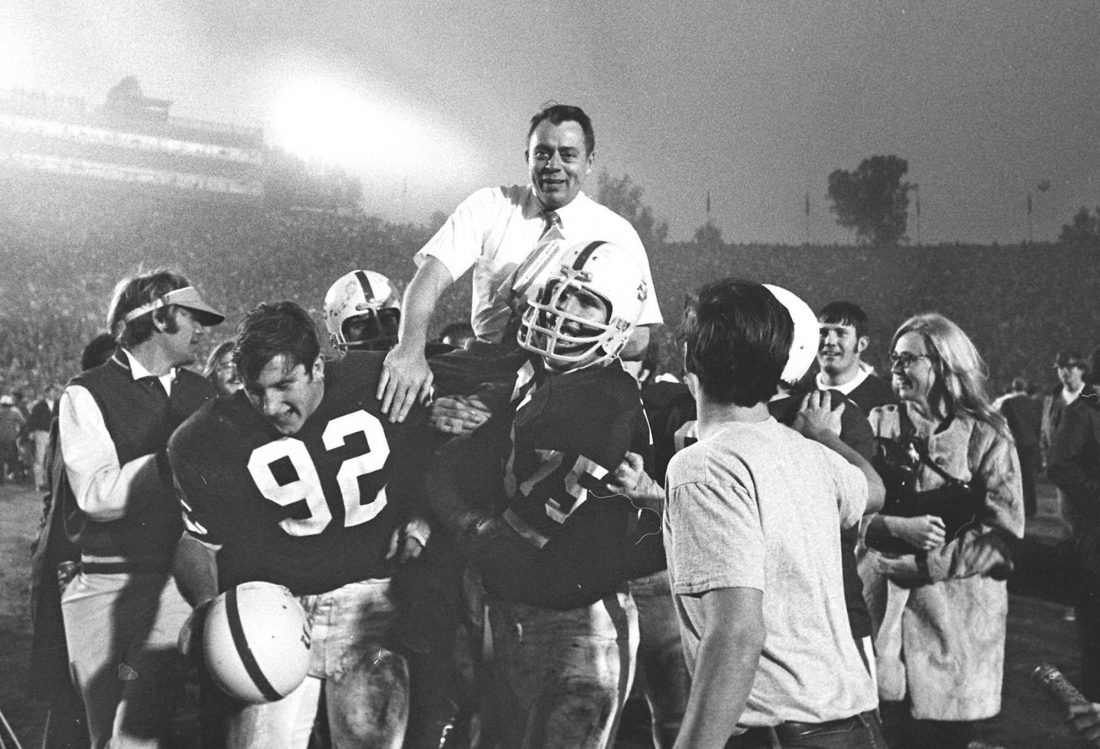 Former Stanford coach John Ralston is carried off the field by his players after they defeated the Ohio State Buckeyes in the Rose Bowl game Jan. 1, 1971, in Pasadena, Calif. Ralston, who also coached the Denver Broncos, died Saturday in Sunnyvale, Calif. He was 92. (AP Photo/File)

In 1963, Ralston was hired as head coach at Stanford University. Over nine seasons, his teams went 55-36-3. In his last two seasons at Stanford, before leaving for Denver and the NFL, the Cardinal won consecutive PAC 8 titles in 1970 and 1971, culminating in back-to-back Rose Bowl victories, against Ohio State 27-17 in 1971 and Michigan 13-12 in 1972. Both Big Ten teams had come into the Rose Bowl undefeated.

Hamlin and his wife, Jean, were at the Rose Bowl game against Michigan.

“Jack set us up with 50-yard line seats. There were two or three other couples from Norway who went out there for the game that year. We got driven to the parade, got treated to dinner at the Rose Bowl Convention Center on New Year’s Eve. His (Ralston’s) brother George was with us as well. ‘Friends of the Rose Bowl’ was what we were considered.”

Under Ralston’s tutelage, Stanford quarterback Jim Plunkett won the Heisman Trophy in 1970. Among the prominent coaches to work for Ralston at Stanford were future Super Bowl-winning coaches Bill Walsh and Dick Vermeil, along with Jim Mora Sr. and Mike White.

On Jan. 5, 1972, only four days after winning his second consecutive Rose Bowl, Ralston resigned to become head coach of the Denver Broncos. He also was the team’s general manager from 1973-1976. His overall record as Broncos head coach was 34-33-3, being named UPI’s AFC Coach of the Year in 1973 after leading Denver to its first-ever winning season at 7-5-2.

But his tenure with the Broncos came to a stormy end in early 1977 after about a dozen players met with then-Broncos owner Gerald Phipps, demanding Ralston’s resignation. Phipps stripped Ralston of his GM duties, in a public attempt to get Ralston to resign, according to a Dec. 28, 1981, article in Pro Football Weekly. “I’m not a quitter,” Ralston was quoted as saying then. “We’ve gone too far in the last five years to not see this thing through.” In the end, Ralston did resign.

Longtime Denver Post writer and ESPN personality Woody Paige wrote an article highlighting the Ralston saga in Denver, saying, “They believed the Broncos had underachieved with Ralston and his Dale Carnegie-inspired coaching philosophy.” The next season, under veteran NFL assistant Red Miller, the Broncos would reach their first Super Bowl with 33 of Ralston’s players.

The short-lived United States Football League was the next stop for Ralston. In 1983 and part of the 1984 seasons, he was the head coach of the Oakland Invaders, where he went 9-12. In 1978, he was offensive coordinator for the Philadelphia Eagles under former assistant Dick Vermeil. That year, the Eagles reached the postseason for the first time in 18 years, which ended the longest postseason drought in the franchise’s history and one of the longest in the history of the NFL.

That season also saw the “Miracle at the Meadowlands,” after a fumble recovery by Philadelphia cornerback Herman Edwards that was returned for a touchdown at the end of the game against the New York Giants in Giants Stadium on Nov. 19, 1978.

San Jose State University became the last stop in his career. He was the head coach from 1993 to 1996, then became assistant athletic director in 1997, a position he held along with the titles of special assistant to the athletic director and the football department until 2013. Ralston’s overall record as a head coach in college was 97-81-4.

“The death of John Ralston is a sad loss for the Upper Peninsula,” said U.P. Sports Hall of Fame secretary and retired Escanaba Daily Press sports editor Dennis Grall. “Ralston was one of the most accomplished athletes/coaches in U.P. history and was highly regarded and respected, both in the U.P. and across the country. … He was a true gentleman and a positive influence on many people and was a proud Yooper.”

Mariucci said Ralston was instrumental in setting up the Sept. 7, 1996, game between the Cal Golden Bears, then coached by Mariucci, and Ralston’s San Jose State Spartans at Spartan Stadium in San Jose, Calif. The game, which Cal won 45-25, was dubbed the Yooper Bowl.

“John Ralston was as highly respected of a person and coach as anyone I’ve ever known. No matter what community he lived or coached in, he was a class act, a gentleman, Bart Starr-type of a man,” Mariucci said by telephone Tuesday morning.

“He and I had many of the same connections in the Bay Area. We saw each other often up until recently, which I always looked forward to. He deserves to be remembered and recognized as one of the greatest Yoopers of all time,” Mariucci said.

“We were playing softball on a field on Stephenson Avenue, down where Lardenoit’s beer warehouse used to be. I was playing second base and Jack was the umpire at first base,” Jasonowicz said. “I fielded a hot grounder, threw the runner out at first base by a step and a half. Jack called him safe. I looked over at him in amazement of the call and he said with a smile, ‘I wanted to see what the pitcher would do with a runner on first base.'”

Hamlin said, “From the time he was a teenager, Jack was as straight as an arrow. He never swore, was as genuine and kind as nearly anyone I ever met.”

The Associated Press contributed to this story.