JOSEPH SCHAFFER OF Pembine, Wis., right, who served in the Air Force during the Korean War and Vietnam War, is surprised by his daughter, Donna Nolan, at Ronald Reagan Washington National Airport on Wednesday during Mission XVII of the U.P. Honor Flight. (Jordan Beck/Daily Press photo)

Pete Hooser of Iron Mountain, right, who served in the Air Force during the Korean War and Vietnam War, and guardian Kathy Pavlat visit the Lincoln Memorial during Mission XVII of the U.P. Honor Flight on Wednesday. (Jordan Beck/Daily Press photo) 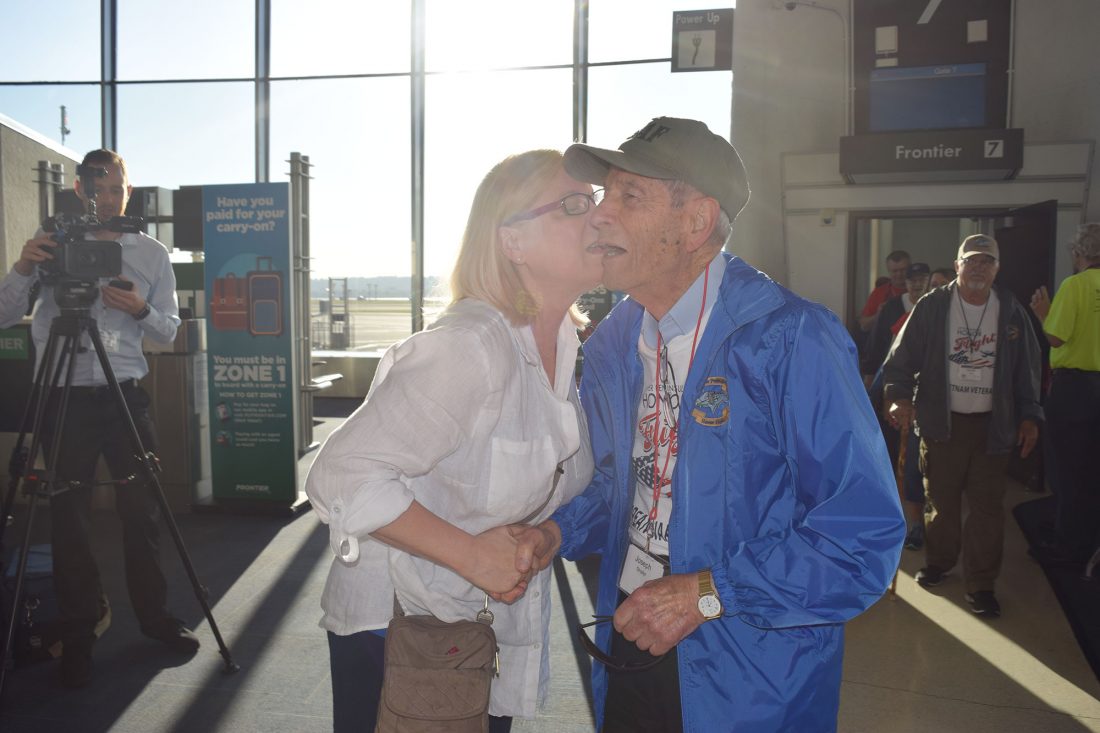 JOSEPH SCHAFFER OF Pembine, Wis., right, who served in the Air Force during the Korean War and Vietnam War, is surprised by his daughter, Donna Nolan, at Ronald Reagan Washington National Airport on Wednesday during Mission XVII of the U.P. Honor Flight. (Jordan Beck/Daily Press photo)

WASHINGTON, D.C. — Eighty-five veterans from across the Upper Peninsula traveled from Delta County Airport in Escanaba to Washington, D.C. and back while participating in Mission XVII of the U.P. Honor Flight on Wednesday.

U.P. Honor Flight is a non-profit organization that gives veterans in the region all-expenses-paid trips to visit memorials in the nation’s capital. Veterans from World War II, the Korean War and the Vietnam War were present for Mission XVII, which left the airport in Escanaba at 6:38 a.m. Wednesday and landed at Ronald Reagan Washington National Airport about an hour and a half later.

One Honor Flight participant — Joseph Schaffer of Pembine, Wis., who served in the Air Force during the Korean War and Vietnam War — received a surprise before he even left the airport in Washington. He was greeted there by his daughters, Donna Nolan and Debbie Coloney, who live in Waldorf, Md., and Peachtree City, Ga., respectively.

“I had no idea that they would be here,” Schaffer said. 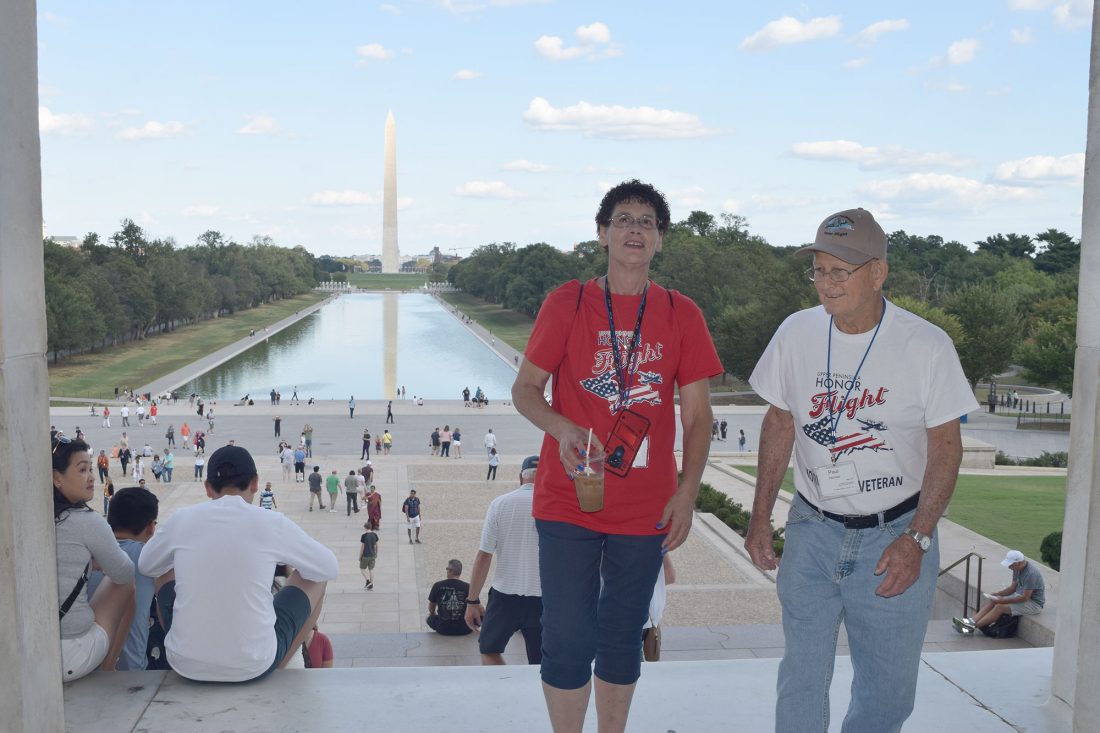 Pete Hooser of Iron Mountain, right, who served in the Air Force during the Korean War and Vietnam War, and guardian Kathy Pavlat visit the Lincoln Memorial during Mission XVII of the U.P. Honor Flight on Wednesday. (Jordan Beck/Daily Press photo)

At the airport, Honor Flight participants boarded charter buses to travel around Washington. These buses transported veterans, their guardians and other Honor Flight volunteers; the buses also received a police escort during the day.

Those on the Honor Flight visited a wide variety of memorials in the Washington area Wednesday. The first point of interest they stopped at was the U.S. Navy Memorial.

William Weissert, of Escanaba, who served in the Navy during the Vietnam War, said he was impressed by the memorial.

“It just brings back memories,” he said of “The Lone Sailor,” a statue featured there. 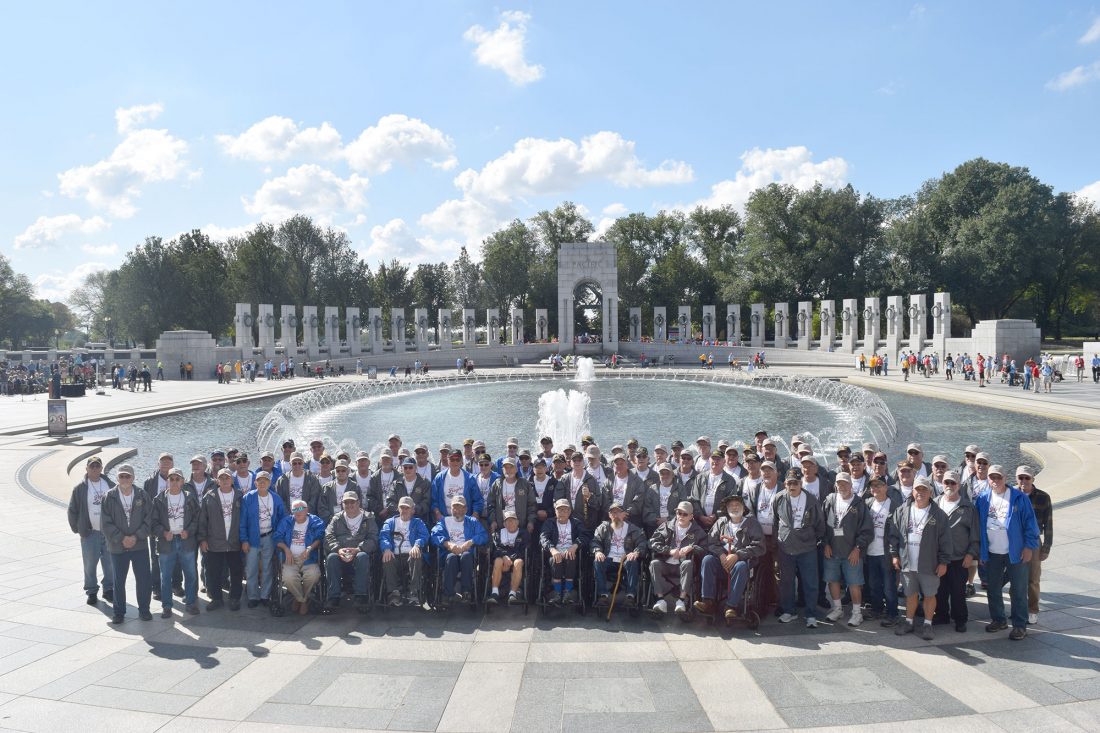 “(It’s) big, lots of buildings, lots of history, and it’s our nation’s capital,” he said.

The tour group went on to visit the World War II Memorial, where veterans posed for a group photo in front of the Rainbow Pool. Later, Richard Derby Sr., of Marquette — who served in the Medical Corps attached to the United States Air Force during World War II — said he was awed by the memorial.

“It’s just beyond description — beyond words,” he said.

Derby had been to Washington in the past; however, he had not visited the World War II Memorial before. He said he appreciated the Honor Flight for giving him the opportunity to see this memorial and others.

“I’m just ecstatic with the joy of being here,” he said.

During their visit to the World War II Memorial, some veterans on the Honor Flight had the opportunity to meet U.S. Rep. Jack Bergman, a retired U.S. Marine Corps lieutenant general.

“I never miss an Honor Flight when they’re coming into town … it’s my honor to honor them,” Bergman said.

Travelers on the Honor Flight went on to visit the Franklin Delano Roosevelt Memorial, where they enjoyed a picnic lunch. Knauf said visiting this memorial was not part of the original itinerary for the day.

“We changed up our schedule, and it went better than planned,” he said.

The group’s next stop was the Arlington National Cemetery. There, Honor Flight participants had an opportunity to observe the changing of the guard at the Tomb of the Unknown Soldier.

James Jauquet of Sagola, who served in the Army during the Korean War, was stationed at the gate of Fort Myer near Arlington in 1953 and 1954.

Jauquet said he was grateful for the opportunity to revisit memorials he remembered from his time serving in the area.

Harry Krebs, of Escanaba, who served in the Marine Corps during the Korean War, was one of the veterans who visited the Korean War Veterans Memorial at this time. Krebs said he enjoyed seeing the memorial, which features statues representing those who fought in the Korean War. He also said he would like to see it at night.

“It’s lit up, and they … make it look like they’re going through a foggy area. Another Korea veteran told me it’s spooky — it’s beautiful, but it’s spooky,” he said.

On the whole, Krebs felt the Honor Flight was “fantastic.”

“I thought it would be great, but it’s even better than I thought. It’s just hard to take it in all at once,” he said.

Richard Harrer, of Eagle Harbor, who served in the Navy on river boats during the Vietnam War, was among the veterans who visited the Vietnam Veterans Memorial. He described the experience of seeing the memorial’s famed wall as “very moving.”

Harrer encouraged any veterans in the area who have the opportunity to go on an Honor Flight to do so.

After their long day in Washington, Honor Flight participants returned to the airport to board their flight back to Michigan. During the return flight, veterans received a special coin commemorating the event. They were also presented with special messages during “mail call.”

Michael Cowling, of Republic, who served in the Army during the Vietnam War, said the mail call was “overwhelming.”

“Sometimes, you never got mail — I went six months without a letter,” he said.

When they arrived in Escanaba, veterans were welcomed back to the U.P. by a crowd of family members, friends and strangers. This took place at the Van Rooy Hangar at the Delta County Airport.

Although Mission XVII of the U.P. Honor Flight has just been completed, Knauf said the process of planning for Mission XVIII has already begun.

“I was sending some emails out last week trying to confirm my date for next May,” he said.