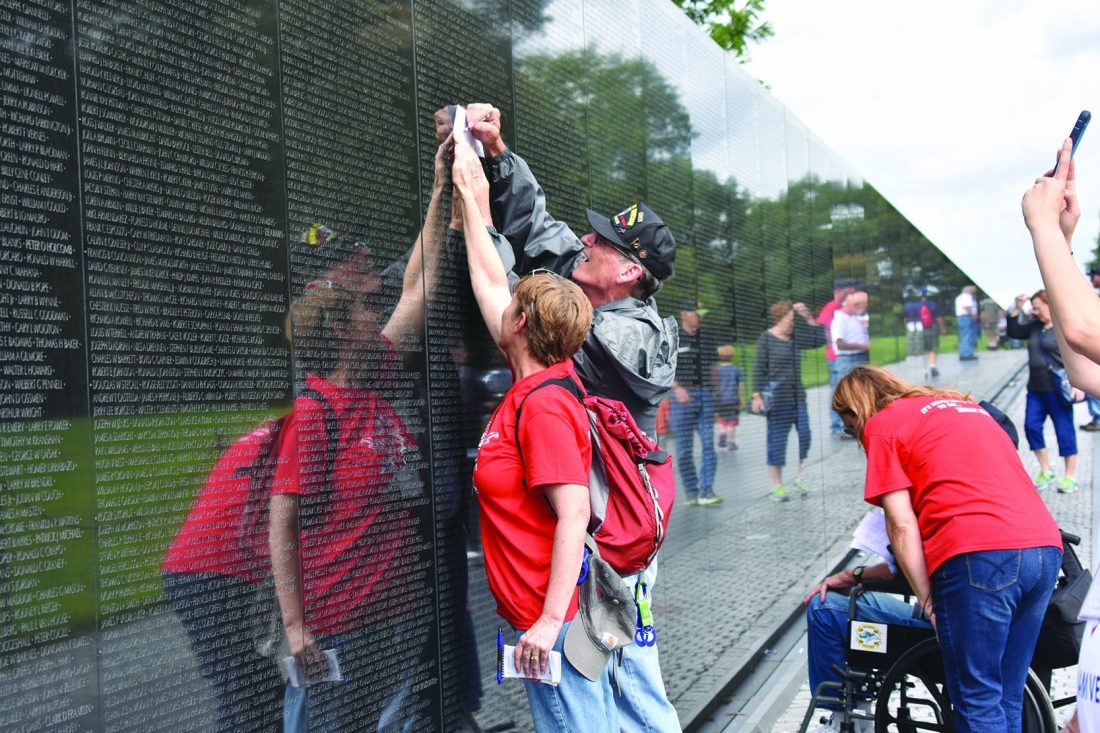 (Daily Press file photo) VIETNAM VETERAN RICHARD PICHETTE, far right, takes a paper and pencil to get the name of his first cousin, Vincent Agius, off of the Vietnam Memorial Wall with the help of his guardian during an Upper Peninsula Honor Flight trip to Washington D.C.

ESCANABA — Upper Peninsula Honor Flight, a nonprofit organization that gives veterans in the region a chance to visit memorials in Washington, D.C., is gearing up for its second mission of 2019 that will take off Wednesday.

“This will be Mission XVII,” U.P. Honor Flight President Scott Knauf said of the upcoming flight.

U.P. Honor Flight, which is part of the Honor Flight Network, was started by Barb Van Rooy of Gladstone in 2011.

“Her father was a … World War II veteran, and she wanted him to go on an Honor Flight,” Knauf said.

At first, Van Rooy had some difficulties getting other local veterans interested in going on the Honor Flight. After the first mission, however, positive word-of-mouth about the program began to spread locally.

“Then the applications started to come in,” Knauf said.

Although Van Rooy had only planned to organize a single Honor Flight, Knauf said growing interest in the program led her to schedule another.

“It just has continued since then,” he said.

Since 2012, U.P. Honor Flight has flown two missions per year — one in the spring, and one in the fall. Knauf said 85 veterans will be participating in Mission XVII.

Efforts to plan for the upcoming flight have been ongoing for quite some time.

“We started back in May getting ready for this flight,” Knauf said.

About two months ago, U.P. Honor Flight representatives started calling veterans who had applied for the Honor Flight to let them know there was a seat reserved for them on the flight.

The night before Mission XVII, veterans, their guardians and their family members will attend a meet-and-greet event and dinner at the Quality Inn and Suites in Escanaba. Most participants also will spend the night at the hotel before getting off to an early start Wednesday.

Mission XVII is scheduled to take off from the Delta County Airport at 6:30 a.m. and return at 8:30 p.m., both Eastern times Wednesday.

Veterans from World War II, the Korean War and the Vietnam War will take part in this Honor Flight.

“What we have planned is a very full day for them,” Knauf said.

When they return to Escanaba, participating veterans will be greeted by family members, friends and strangers.

“We welcome the community to come out to the Delta County Airport,” Knauf said.

Doors for the “welcome home” event, which will take place in the Van Rooy Hangar, will open at 7 p.m. Eastern time.

For more information on the U.P. Honor Flight, go to www.upperpeninsulahonorflight.org.