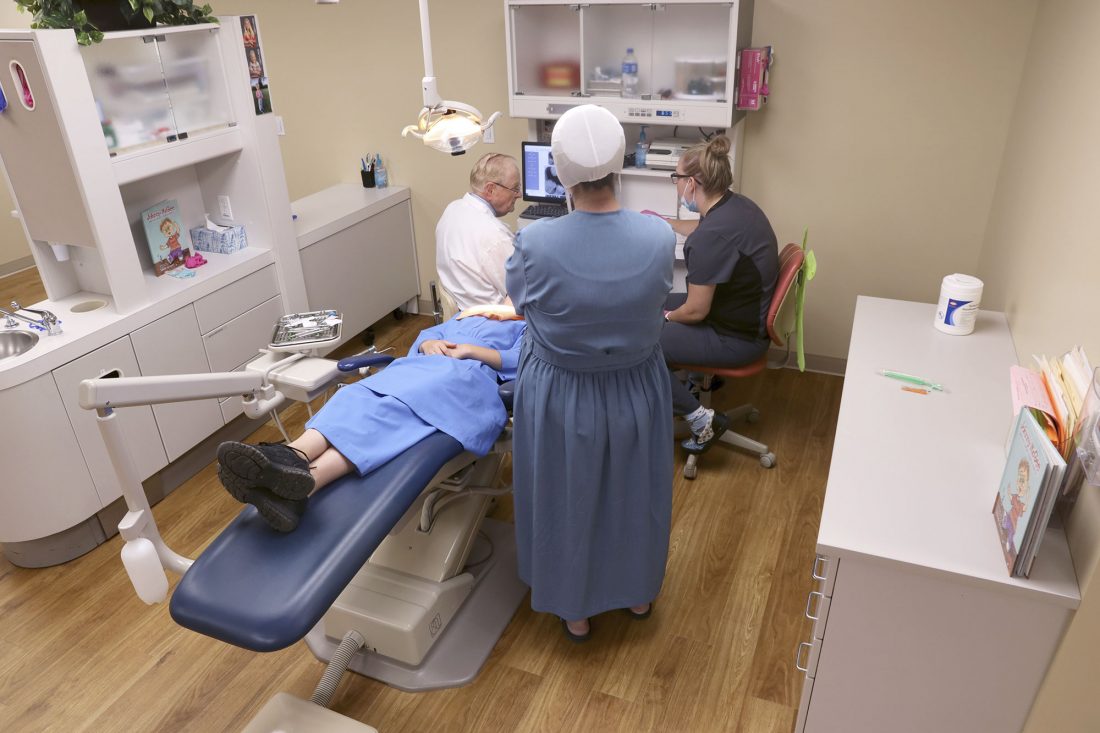 Coburn Dukehart/Wisconsin Watch via AP A MOTHER FROM an Amish community in Brodhead, Wis., watches as her 12-year-old daughter receives an exam at the Fowler Memorial Free Dental Clinic in Monroe, Wis. The mother had brought five of her children to the clinic.

CHICAGO (AP) — When Ryan Neville was brought on as the chief executive of Memorial Medical Center, the sole hospital serving Clark County, Wisconsin, it could not get a bank loan.

At that time, in 2013, rural safety net hospitals — those located more than 35 miles from another hospital — had a nationwide average of 69 days of cash reserves. But the Neillsville hospital lost $3 million that year and had enough reserves to pay its expenses for just four days.

The hospital needed new equipment to boost revenue. With few other options, it took the unusual step of seeking help from city hall, which helped the hospital get a $1.5 million loan.

“We are very thankful for that,” Neville says. “I think without that loan that the city helped us get or backed us on, we potentially could’ve closed or been significantly downsized.”

Had it closed, residents of the farming community would have had to drive 40 minutes to Marshfield or an hour to Eau Claire, turning some medical emergencies into catastrophes.

Nationwide, 155 rural hospitals have closed in the past 15 years, according to the North Carolina Rural Health Research Program. Nearly half of the remaining rural hospitals lose more money than they make, says Michael Topchik, national leader of the Chartis Center for Rural Health, a Chicago-based consulting firm.

Wisconsin has fared better than many states: Just one of its rural hospitals has closed in the past 10 years. Others have cut services or merged with larger systems to stay alive.

But as of 2017, 16 of Wisconsin’s 76 rural hospitals were operating in the red, according to a report from Chartis and iVantage Health Analytics. According to Navigant, another Chicago-based health care consultant, nine such hospitals were in danger of closing, including two — in Durand and Grantsburg — that are considered essential to the local community.

And a report from the Wisconsin Hospital Association Information Center found unpaid medical bills continue to climb as 150 Wisconsin hospitals reported $1.2 billion in “bad debt” and charity care in fiscal year 2018 — an increase of nearly $90 million from fiscal year 2017.

Rural hospital closures can be deadly: Mortality rates for time-sensitive conditions like heart attacks and strokes increased by nearly 6% after a rural community lost its hospital, according to a new report on California’s hospitals by University of Washington researchers.

Trapped under antiquated policies and infrastructure in communities with dwindling populations, some rural hospitals cannot afford to adapt to a rapidly evolving health care system.

Says Topchik: “There’s a lot of agreement that we need to do something, because otherwise you’re going to see a dust bowl vision, with all these small towns just drying up and blowing away like tumbleweeds.”

The federal Critical Access Hospital designation is vital for many small rural hospitals. If hospitals meet requirements, including 25 or fewer inpatient beds, 24-hour emergency care and located more than 35 miles from another hospital, Medicare reimburses them at 101% of allowable cost, although the number is closer to 90% in reality because of cutbacks and what is deemed allowable, Topchik says.

That higher reimbursement is the only thing keeping some rural hospitals open. But it also locks them into a model of inpatient-focused care that no longer makes sense, says Dave Mosley, managing director of Navigant Health Care.

Compared to urban hospitals, rural hospitals treat more patients with government insurance, which generally pays less than private insurance, or without any insurance at all.

In Wisconsin, a private insurer will pay the hospital nearly three times what Medicare would pay, according to a 2019 Rand Corporation study. Medicare pays hospitals 88 cents for every $1 spent, while Medicaid pays 90 cents on average. States set Medicaid reimbursement rates, and they can range from 81% to 130% of cost, according to a 2016 Medicaid and CHIP Payment and Access Commission report. And many uninsured cannot pay at all.

The Neillsville hospital, for example, serves a county where 18% of residents are uninsured — the highest rate in the state. The county has high rates of poverty, too: 22% of Clark County’s children live in poverty — significantly higher than the statewide average of 16%.

Hospitals spend money day-in, day-out on maintaining inpatient beds, running air conditioning and keeping the lights on regardless of whether they have any patients. Neillsville has 17 hospital beds that remain mostly empty; it has an average of just four patients a night, although the beds are used for other services during the day.

Topchik says hospitals with good management can face tough situations and still survive, but “You can only get so lean and so mean.”

Non-expansion states, many of them in the South, also suffer under “bad debt” and “stingy” Medicaid programs, Topchik says.

“They’re getting clobbered, they’re just getting absolutely clobbered,” he says of states that declined to expand Medicaid. “Their politics have made them poorer.”

Congress is considering several bipartisan bills to change models of care to help rural hospitals, but they stand little chance of passing a divided Congress, Mosley says. One proposal, stalled in Congress, would allow rural safety-net hospitals to operate as standalone emergency departments, without maintaining beds. They would be reimbursed by Medicare at 110% of cost.

In 2018, Neillsville’s hospital board faced a hard decision.

The multibillion-dollar Marshfield Clinic Health System and its state-of-the-art hospital were drawing away patients. Many businesses were choosing Security Health Plans, Marshfield’s own insurer, which did not cover services rendered at Neillsville.

The hospital board debated whether the Neillsville hospital should remain independent or be absorbed by Marshfield. They chose the latter.

Neville calls it the “best move we’ve made,” allowing the hospital to utilize the larger system’s services including IT and human resources, increase the volume of patients and bring a rotating cast of specialists into the hospital, now named Marshfield Medical Center-Neillsville. In fact, Neillsville will soon get a new $46.8 million medical campus funded by the health system.

The deal Neillsville made is increasingly common. Mergers, acquisitions and affiliations of small, rural hospitals with large health systems have reduced the number of independent rural hospitals in Wisconsin to less than a dozen.

But for some hospitals, the loss of independence has meant the loss of care. A total of 152 communities in the United States have lost access to obstetrics services since 2011, according to Chartis. Eleven of Wisconsin’s rural obstetric units have closed in the past decade, including Neillsville’s.

States like Wisconsin, with below-average poverty rates, have mostly avoided the rash of hospital closures that have swept across the South, Topchik says.

“There is absolutely a Lake Wobegon effect, where the women are hardworking, the men are good-looking, and the children are all above average. And then I like to add: And people tend to pay their hospital bills,” he says. “And what do we attribute that to? Poverty. Poverty drives many of the health disparities we see around the country.”

Researchers have estimated that flawed medical care is responsible for just 10% to 15% of preventable deaths. The rest is driven by non-medical social factors such as income and education.

Some epidemiologists call poverty the “cause of causes,” ranging from bad cholesterol to brain function. Race can also have an independent, compounding effect.

Dr. Patrick Remington, who runs the University of Wisconsin’s preventive medicine residency program, says the crisis in rural America is not shuttered hospitals, but lack of employment opportunities and the exodus of young people with education, leaving older people and the disadvantaged behind.

In Wisconsin, only one rural hospital has closed in the past 10 years: Franciscan Skemp Medical Center in the western farming community of Arcadia, located between La Crosse and Eau Claire, which closed in 2011.

Family physician Dr. Bert Hodous used to work at the Arcadia hospital. He now works at the Mayo Clinic Health Systems’ clinic in Arcadia. He acknowledges that the hospital was old and required upgrades.

Hodous says these days, it is not uncommon for people to drive an hour to La Crosse to get their prescriptions. And that, he believes, is not good for the community.

The nonprofit news outlet Wisconsin Watch provided this article to The Associated Press through a collaboration with Institute for Nonprofit News.