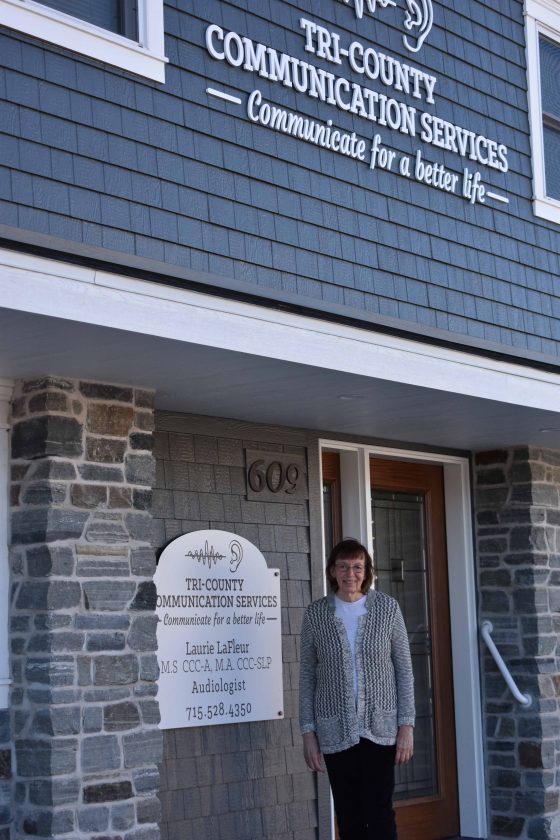 Betsy Bloom/Daily News photo Laurie LaFleur has had her Tri-County Communication Services audiology and speech therapy practice in Florence, Wis., since 1987. While she’s kept what’s inside the office state-of-the-art, she said only recently did they renovate the exterior of the building to give it a new look.

FLORENCE, Wis. — At 75, audiologist Laurie LaFleur could have retired from her longtime practice in Florence years ago, focusing on travel and time with family.

But, she says, where’s the fun in that?

LaFleur and her extended family — 14 in all — already travel, taking cruises, visiting the Grand Canyon in August. Today, they’ll start on a National Geographic-organized trip to the Galapagos Islands. In the works for the future is going to Costa Rica.

“Something of interest to everyone, that we could do together as a family,” LaFleur said.

Plus, she “absolutely loves” her work, even after more than three decades in audiology and speech therapy.

“I enjoy making a difference in the way people communicate,” LaFleur said. “That’s what really gives me happiness, to hear people speak and hear again. To make life easier for them.”

LaFleur grew up in Manistee, Michigan, not coming to Amasa until 1971 with her husband, Daryl McCaslin. He wanted to raise and train sled dogs, she said, but would be lost in 1981 to a brain tumor at only age 43.

A second marriage did not last, LaFleur said, but produced her youngest child, Amy.

LaFleur said she started in speech therapy but found her patients often had difficulty hearing her. So she went back to college, adding a master’s in audiology as well as speech pathology. She now is certified by the American Speech, Language and Hearing Association, or ASHA, and maintains licenses in Wisconsin and Michigan.

Even with the expanded credentials, she said she never considered leaving the region. “When you go to a bigger place, it becomes so specialized. Here, I can do a little of everything,” LaFleur said.

“And I like the rural life. I like the woods, the north … I’ve just always loved it up here.”

She opened her practice in Florence in 1987, in a building suggested by one of her then patients. Her main services include audiological evaluations and counseling, along with fittings for hearing aids. Though a rural practice, she has maintained state-of-the-art equipment in Florence, such as a video otoscope that can show images from deep in the ear, she said. The office has a lab for custom fitting hearing aids and a sound-proof room for testing.

Perhaps more telling of LaFleur’s expertise, all three of her children followed in their mother’s footsteps. Son Devin McCaslin now is senior associate consultant with the Division of Audiology, Department of Otorhinolaryngology at Mayo Clinic in Rochester, Minn. Daughter Shannon McCaslin-Rodrigo went from speech pathology to become a psychologist who works with veterans in the San Francisco area. Baumer works in speech-language pathology in East Lansing.

Mom understandably is proud. “The kids,” LaFleur said, “have done so well.”

In the past year, LaFleur has invested in updating the exterior of the Florence building, with a new facade in blue, gray and white, adding shingles along with the existing stone. “Finally, I was just like, I had to do something with the outside,” she said.

While for much of her career few people like her practiced in rural areas, LaFleur said the numbers are starting to grow.

Yet even with more audiology and speech therapy professionals in the region, LaFleur said she does not foresee stepping away anytime soon.

“You feel like you’re doing a really good service,” she said.

MADISON, Wis. (AP) — Wisconsin is asking hundreds of thousands of voters to ignore a stay-at-home order in the ...

DETROIT (AP) — Michigan is among 14 states receiving $65 million in federal investments for the improvement of ...

LANSING, Mich. (AP) — A field hospital at Detroit's downtown convention center could gets its first COVID-19 ...