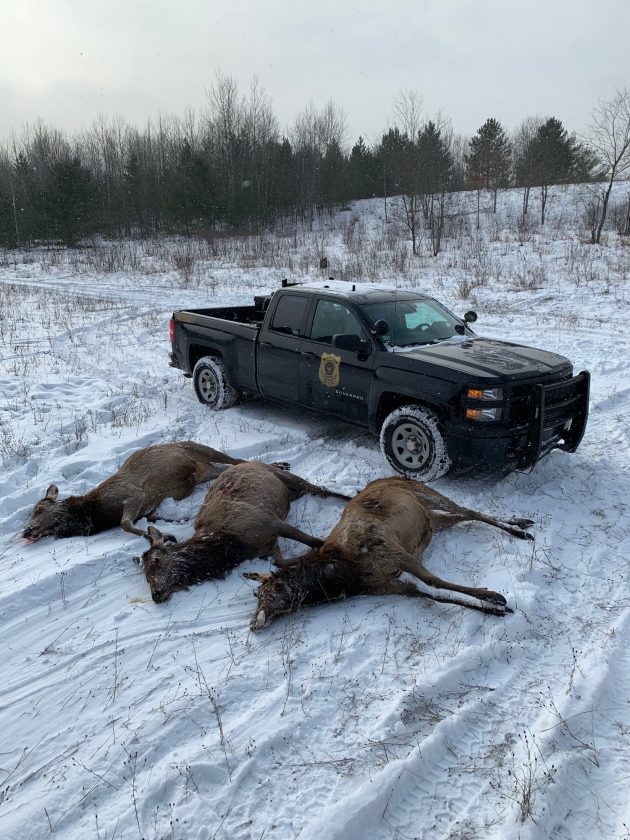 TRAVERSE CITY, Mich. (AP) — Three elk were shot dead while bedding down in a snowy northern Michigan field — the third case of elk poaching in the region within about a month, conservation officers said Wednesday.

The adult females apparently were killed this past weekend in the Pigeon River Country State Forest, east of Vanderbilt in Otsego County, said Lt. Jim Gorno of the state Department of Natural Resources.

They are among eight Michigan elk known or believed to have been shot illegally in 2019 — more than any previous year, officers said.

“This is a loss for everyone who appreciates our state’s natural resources,” Gorno said.

One elk was found in the bedding area, while another appeared to have fled about 50 yards before collapsing, said Sgt. Michael Mshar, who investigated the scene. The third was found about 100 yards away. Bullets and other evidence were collected.

“It’s kind of astounding,” Mshar said. “Poaching happens every year, but three animals at once is a rarity. It’s extremely disturbing that someone would shoot all three and just leave them. Nothing was salvageable; all three went to waste.”

The shootings happened just north of Hardwood Lake Road. Footprints in the snow led from the road to each of the elk carcasses and back to the road, suggesting the poacher spotted them while driving, Mshar said.

Michigan’s annual elk hunting season began Saturday and ends Dec. 22. Based on a drawing system, 100 hunters per year are issued tags to take one elk each.

“I’m sure there’s some frustration among people who have never drawn a tag,” Mshar said.

One of the legally authorized hunters found the carcasses of the poached elk and notified the DNR.

The department is appealing for tips from the public. Information can be provided anonymously to the DNR office in Gaylord at 989-732-3541 or the Report All Poaching hotline at 800-292-7800. Rewards are available for information leading to arrest and conviction.

Two bull elk were illegally killed in the area recently. Investigators have a suspect in one of the cases, Mshar said.

Michigan’s elk herd is estimated at 900 to 1,200. They roam woods and fields of the northern Lower Peninsula, with the highest numbers in the Pigeon River Country area.