UP gun deer harvest down slightly 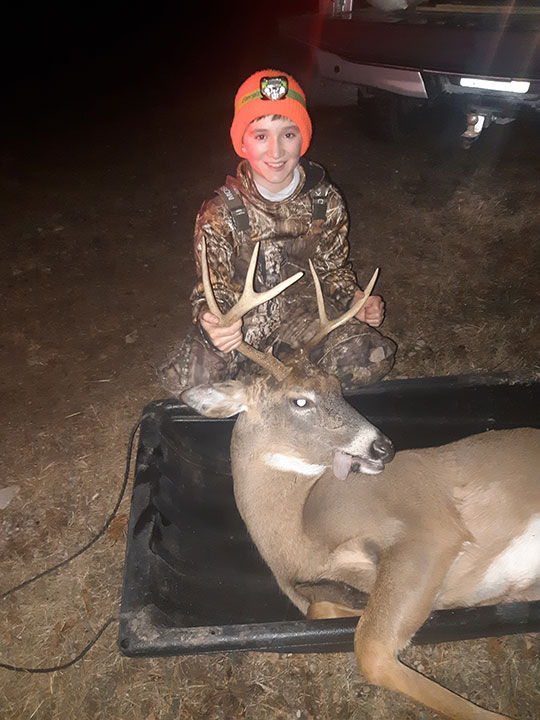 AUSTIN FARLEY OF Powers shot this monster seven-point buck near Hermansville on Saturday. The deer had a 16-inch spread.

MARQUETTE — Preliminary results from deer check stations across the Upper Peninsula show the harvest for this year’s firearm deer hunting season was down roughly 5% compared with 2018 and the 10-year average, wildlife biologists with the Michigan Department of Natural Resources said Tuesday.

The results were compiled as of the end of the day Monday.

“As with all of these season comparisons, various factors can play a role in affecting the totals,” said John Pepin, DNR deputy public information officer. “Timing of the opening day, the date of Thanksgiving, deer activity, snowfall and other weather conditions are just some of these circumstances.”

David Jentoft, a DNR wildlife biologist at Sault Ste. Marie, speculated a couple of specific factors may have influenced reports.

“The U.P. received significant snow within the past week, which likely affected check station numbers, at least at some locations,” Jentoft said. “The conditions may have discouraged, or even prevented, some hunters from getting out, and likely discouraged hunters from bringing their deer into a check station.”

At the check station in Sault Ste. Marie, two years of road construction ended just before firearm season but may have affected the deer check totals. It had the largest drops in check station numbers compared with

Overall, it appears the number of bucks and deer brought to U.P. DNR check stations during firearm season was down 5% to 10% from 2018. These totals would be down about 5% from the past 10-year average, Pepin said.

Staffers at DNR check stations reported that most deer checked were in good condition and were 2.5 years old or older. Antler development on bucks seemed to be average to below average, particularly on older bucks, but did vary.

Many hunters mentioned seeing multiple deer, including bucks. Hunters at stations in or near the Core Chronic Wasting Disease Surveillance Area — which includes portions of Delta, Dickinson and Menominee counties — submitted samples for testing, particularly at the Crystal Falls and Norway stations.

A summary of the number of deer checked at each station:

“Though check station numbers are down, many hunters we’ve spoken with have reported seeing good numbers of deer, especially bucks,” Pepin said. “Most hunters are extremely compliant with testing requests where appropriate and many are interested in learning about possible disease concerns in their hunting areas.”

For a list of DNR check stations, including hours of operation and directions to the locations, go to Michigan.gov/DeerCheck. For more information on chronic wasting disease, see Michigan.gov/CWD.

DNR officials say the season started so late this year that hunters missed the rut and deer weren’t moving around. They also said heavy winds, snow and rain later in the week may have kept hunters out of the woods.

Interest in gun hunting also waned this season. The DNR sold 564,664 licenses through the end of the nine-day season that would have allowed a hunter to kill a deer with a gun, down from 577,576 licenses last year.