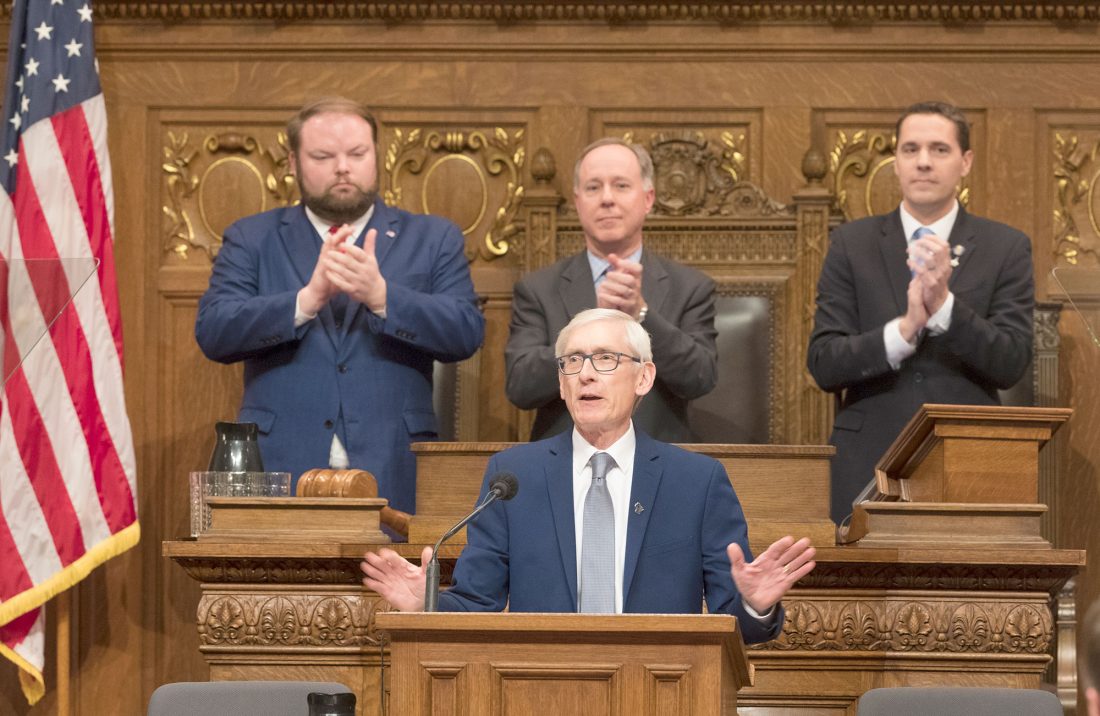 WISCONSIN GOV. TONY EVERS delivers the State of the State address Wednesday at the Capitol in Madison, Wis. (Mark Hoffman/Milwaukee Journal-Sentinel via AP)

MADISON, Wis. (AP) — Wisconsin Gov. Tony Evers extolled lawmakers during his State of the State speech Wednesday to work together to address the state’s farm crisis, calling a special session of the Legislature as part of a three-prong attack to tackle the problem that’s seen a record number of bankruptcies and farmer suicides.

The Democratic Evers also said he was signing an executive order to create a nonpartisan redistricting commission to draw what he said would be “fair, impartial maps for the Legislature to take up next year.”

Evers is entering his second year as governor, faced with an often reticent Republican-controlled Legislature. Evers and Republicans have found little common ground so far and reaction to his speech Wednesday broke largely along partisan lines.

Republican Assembly Speaker Robin Vos and Senate Majority Leader Scott Fitzgerald both rejected the nonpartisan redistricting commission. The constitution gives the Legislature the power to create maps, although they said the panel, just like anyone else, could submit ideas.

“He can form whatever kind of fake, phony partisan process he wants to create, but I have no doubt in the end we will do it the way we have always have, which is to follow the constitution,” Vos said.

The Legislature is charged with drawing new maps following the census every 10 years and will do it again in 2021. They would not have to consider the maps created by the commission Evers is creating, but it gives him an avenue to push the issue for a year. Polls show voters support nonpartisan redistricting. Democrats have blamed the current maps, drawn by Republicans in 2011, with giving the GOP an unfair advantage by gerrymandering districts to their favor.

“We can choose to relitigate past political tussles, or we can choose to transcend animosity to rise and greet the problems before us,” Evers said in his speech in the Assembly chamber attended by lawmakers from both the Senate and Assembly, members of the state Supreme Court, the governor’s administration and others.

Evers urged action to help farmers, noting that Wisconsin loses an average of two dairy farms a day and lost a third of its dairy farms between 2011 and 2018.

“And for each day we delay, the challenges will get harder and harder,” Evers said.

Evers called for the session to begin next week to take up bills that he said would invest in farmers, agricultural industries and rural communities. Republicans who control the Legislature are under no obligation to take up any of the measures. They didn’t debate gun control bills Evers called a special session to consider last year.

But Fitzgerald said he was “all ears” to the idea of a special session.

“We’re all looking for ways to do better when it comes to ag,” said Fitzgerald, who is running for Congress. “There have been a number of proposals by the Legislature but I’m all ears on what the governor has to offer. It sounds like he’s been working on something comprehensive so absolutely I think the Legislature should take time to see what the special session includes and work on those bills.”

Vos said he would look at the ideas.

“If he’s a newfound convert that rural Wisconsin has problems, of course we’re going to listen,” Vos said.

Evers said one bill would create a Wisconsin Initiative for Dairy Exports with the goal of increasing dairy exports to 20% of the country’s milk supply by 2024. Another would increase staffing at UW Extension to ensure farmers and agricultural industries have partners and support closer to home. A third proposal would expand the state’s Farm-to-School program will help to connect farmers and the food they produce with universities, technical colleges, hospitals and local businesses across Wisconsin. Another proposal would create a new program to help connect farmers with mental health services.

There’s little time for the Legislature to act, making it unlikely that much of what the Democrat Evers wants will get done.