FROM LEFT, SISTERS Jennifer Pericolosi and Jessica Clarke of Izzy B Boutique hold the New Business of the Year Award they received in December from the Dickinson Area Chamber of Commerce. (Theresa Proudfit/Daily News photo) 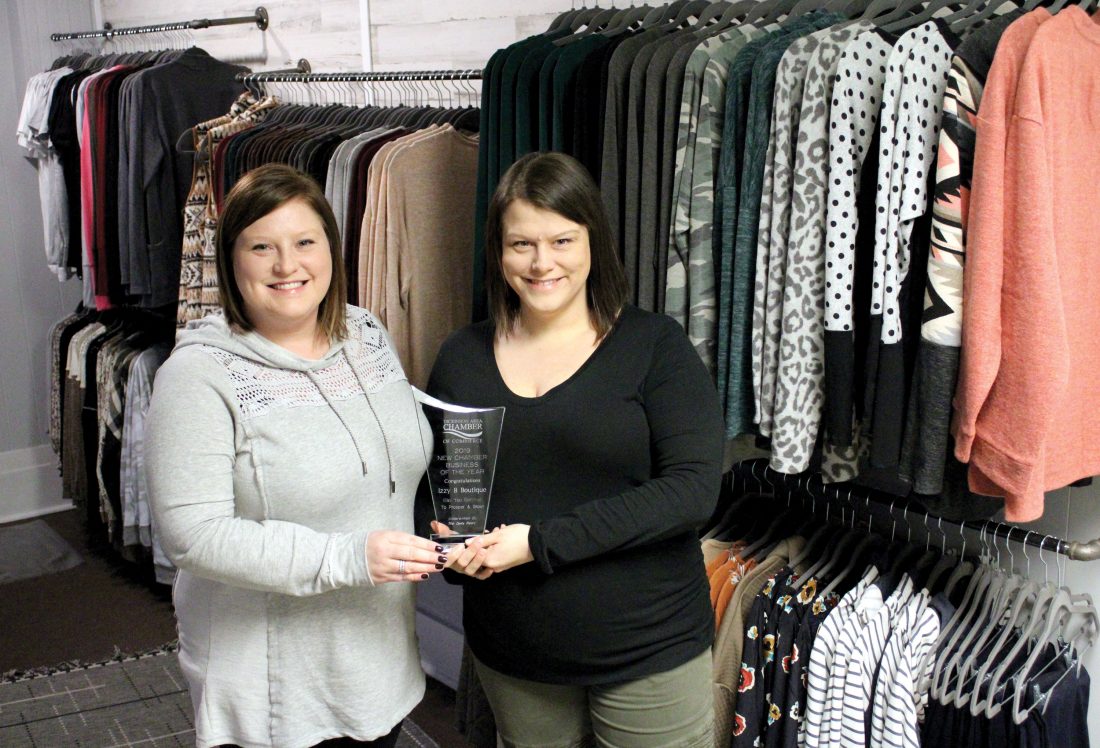 FROM LEFT, SISTERS Jennifer Pericolosi and Jessica Clarke of Izzy B Boutique hold the New Business of the Year Award they received in December from the Dickinson Area Chamber of Commerce. (Theresa Proudfit/Daily News photo)

IRON MOUNTAIN — Shortly after moving back to the Iron Mountain area, Jennifer Pericolosi had the “crazy idea” to open a clothing store on Facebook.

So in November 2017, she and her sister, Jessica Clarke, launched Izzy B Boutique out of Pericolosi’s basement.

“We would do live Facebook sales and Jenny would model the items and then we would ship or deliver the clothing,” Clarke said.

The Nagy sisters had a family history in quality clothing. Their great-aunt, the late Isabel Pasten, and her husband, Mose, opened Isabel’s Ready to Wear Store Inc. in the early 1950s and operated at 421 S. Stephenson Ave. for more than 50 years.

That’s just one block down from where the Nagy sisters opened Izzy B Boutique this past July — Izzy after Isabel, and B after Beverly Chartier, their grandmother who managed the store. 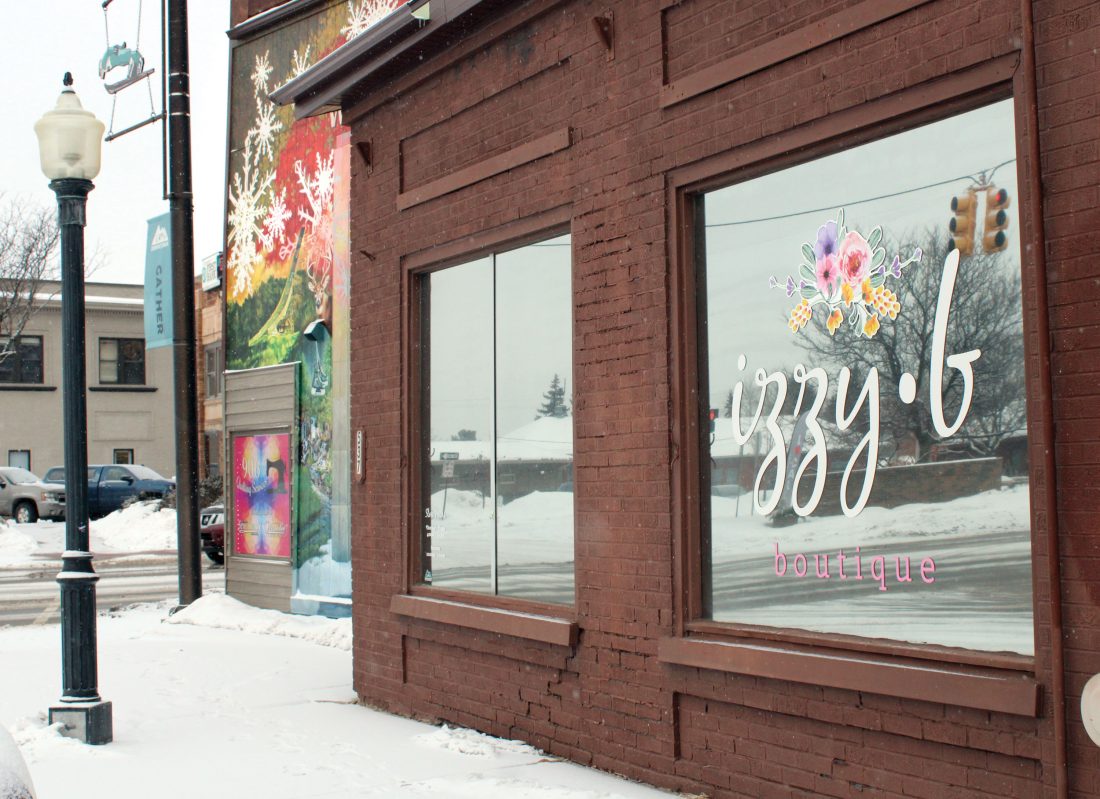 Their grandfather, Robert Chartier, did the bookwork and was the maintenance man. “I would sit in the back playing Barbies and eating saltine crackers while grandma ran the store,” Jessica Clarke said.

“I was always out front, selling jewelry, talking jewelry with the ladies,” Jennifer Pericolosi said.

Both girls grew up in Kingsford and both moved away after college. Pericolosi is a 2001 Kingsford High School graduate and is married to Jake Pericolosi. They have a son, Brody, and another child on the way. She has a business degree from Lakeland College and also works full-time at MJ Electric.

Clarke is a 2007 Kingsford High School graduate and is married to Jordan Clarke. They have one son, Wyatt, and she has a masters in social work from the University of Southern California.

“In 2016, the opportunity for us to move back to the area arose and we jumped at the chance. Raising our families in the town we grew up in, surrounded by family, friends and our community would be awesome,” Pericolosi said.

“The only drawback for us was that there wasn’t anywhere for women, of all ages, to find stylish, comfortable and reasonably priced clothing,” Pericolosi said.

“I’ve always loved clothing, I’ve managed Abercrombie and Fitch and Gap stores and have always had a love for retail,” Pericolosi said.

Both girls agree Pericolosi is the go-getter and Clarke is more cautious, adding they balance each other out. So after a couple of years of “driving her husband crazy” with the basement store, Pericolosi signed a lease at the former Sally’s Hair Salon site at 537 S. Stephenson Ave.

“I called Jessica and said, ‘Guess what I just did? I got us a building.’ I picked the space because it was small. We wanted something easily manageable because we both have full-time jobs,” she said.

“Someday we hope to expand but right now it’s perfect for us,” Clarke said.

Clarke’s husband did the majority of the work on the building, putting up walls and building a dressing room and sales counter. Being a hair salon, the existing walls were all mirrors, so Pericolosi’s husband did some demolition.

“Jake broke all the mirrors and took the bad luck for us,” Pericolosi said.

“We look for comfort; dressy casual. We want it to be comfortable and soft to the touch. As moms, we have to be able to move in our clothing,” Pericolosi said.

“We wanted something for all ages — our mom’s age, our grandma’s friends, clothing for all woman,” Clarke said.

The girls work with vendors out of California and said, in the beginning, it was hit-and-miss.

“Sometimes we would get things in the mail and we knew we were never going to sell it,” Pericolosi said. “It was trial in error; we took a few losses. There was one dress that was white with black polka dots that looked adorable online on the size zero model and when they received it looked like a plastic bag that made you look like a cow. It didn’t work. We won’t sell anything unless it’s a quality item. That is what our grandma and Isabel taught us. You don’t sell anything that you wouldn’t try on or that you wouldn’t wear yourself,” said Clarke.

Although they have limited hours, the sisters say they are doing really well downtown. For now, they are only open from 4 to 6 p.m. Thursday and Friday and 10 a.m. to 2 p.m. Saturday.

“We are very busy on Friday nights and Saturdays. We are so lucky that the people who starting shopping with us at the beginning have continued to support us. They are our number one fans. We get new merchandise in every other week and some customers come in every Saturday,” Clarke said.

The Dickinson Chamber of Commerce recently awarded Izzy B’s with the New Business of the Year award at Business After Hours. And they plan to start up live Facebook sales again in February.

“We love watching our downtown blossom. To be a part of it is so cool. Every store downtown is awesome and we are lucky to be a part of it. If somebody comes in here and they are looking for something we don’t have, we love sending them to Brick and Mortar or Tessa Ave, Lydias, Mully & Mo’s, and BiJou Lovely. We love people to shop local as much as possible. And Linnea and Kristine have been huge supporters of ours. They have been really great,” Pericolosi said.