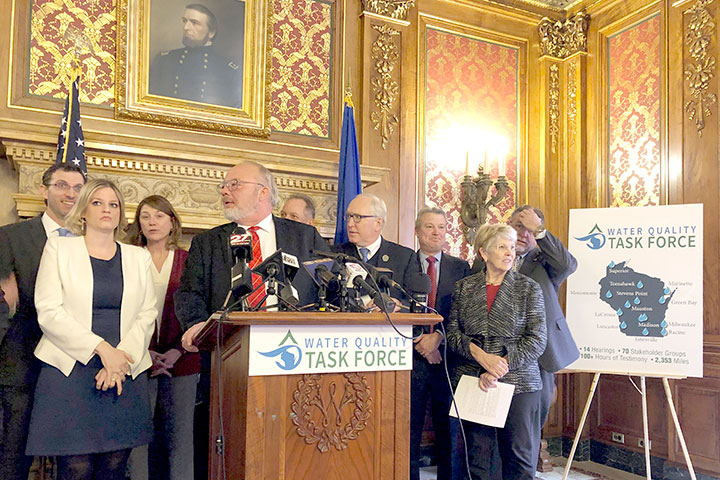 MADISON, Wis. (AP) — A bipartisan water pollution task force proposed more than a dozen bills Wednesday designed to curb contamination across Wisconsin, capping a year’s worth of research and discussion.

Groundwater pollution has been a growing problem in Wisconsin over the last 20 years, creating a rift between environmentalists and the farmers they blame for contaminating wells and water bodies by spreading manure and fertilizers. The agricultural industry has become more concerned since Democratic Gov. Tony Evers took office last year that his cabinet agencies could impose costly new regulations.

The package released Wednesday calls for the state to spend $10 million on a range of initiatives including: creating a new water policy office; bumping up state funding for county conservation workers; increasing grants for rebuilding or replacing wells contaminated with manure and fertilizer; and grants for farmers who grow crops that require less fertilizer.

“It’s clear we can’t just throw money at these issues, thinking they’ll immediately go away,” Republican Assembly Speaker Robin Vos, who created the task force, said in a statement. “Wisconsin needs a long-term strategy to protect, preserve and promote clean water. These bills are a first step toward that goal.”

The bills must pass the Assembly and Senate and be signed by Evers before becoming law. The Senate has proven to be a roadblock for many proposals that have come from previous Assembly task forces. Alec Zimmerman, a spokesman for Senate Majority Leader Scott Fitzgerald, had no immediate comment on chances for the water proposals.

Time is running out for action this year. The Legislature is expected to be in session only a handful of days this spring, adjourning perhaps as early as February.

Evers’ spokeswoman, Melissa Baldauff, said in a statement that the governor was glad to see lawmakers following his lead on water pollution.

Evers declared 2019 the “Year of Clean Drinking Water” when he came into office last year. He released his own report earlier Wednesday touting his administration’s efforts to improve water quality.

Evers’ report noted that the state Department of Resources has started drawing up restrictions on manure and fertilizer in areas prone to groundwater pollution and is developing standards for PFAS, chemicals found in firefighting foam. The report added that the DNR also is working on educating people about the health hazards of lead pipes and developing a program to forgive loans for replacing such pipes.

“Tens of thousands of people in Wisconsin are afraid to turn on their tap to drink water,” Evers is quoted as saying in the report. “That is unacceptable, and we must fix it.”

Vos created the task force a year ago at the request of Republican Reps. Travis Tranel and Todd Novak, who represent portions of Grant, Iowa and Lafayette counties in southwestern Wisconsin. Scientists have been testing wells in that region for contamination. So far they’ve found at least 60 wells polluted with fecal matter from humans and livestock.

The task force, made up of 12 Republican and four Democratic legislators, held 14 public hearings on water quality around the state over the past year.

The panel’s proposals include: creating a new Office of Water Policy within the Wisconsin Geological and Natural History Survey; increasing state funding for county land and water conservation workers; and increasing grants for rebuilding or replacing wells contaminated with nitrates, which originate from manure and fertilizer. Other provisions include creating new grants for farmers who grow crops that require less fertilizer and extending a grant program for private septic system repairs for another two years.