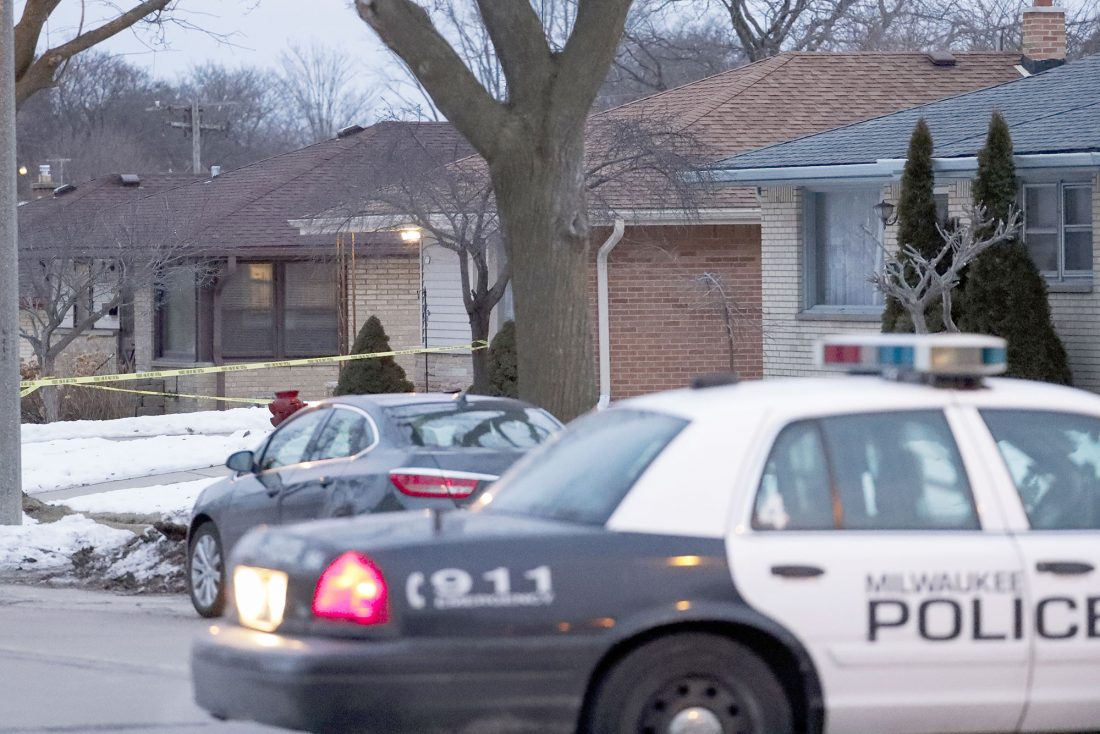 AP Photo/Morry Gash POLICE OUTSIDE A house near West Potomac and West Courtland avenues in Milwaukee thought to be the home of 51-year-old Anthony Ferrill, identified Thursday at the man who opened fire a day earlier at Molson Coors Brewing Co., killing five co-workers before taking his own life.

MILWAUKEE (AP) — A Milwaukee electrician who police identified Thursday as the man who fatally shot five co-workers at one of the nation’s largest breweries enjoyed building guns, according to neighbors.

Authorities said 51-year-old Anthony Ferrill opened fire at the Molson Coors Brewing Co. complex on Wednesday, killing five male employees before turning his gun on himself. His motive remains a mystery; police say the case is still under investigation. They also haven’t released details about how the shooting unfolded.

Milwaukee police Chief Alfonso Morales said during a news conference that the victims were all from the Milwaukee area. He identified them as Jesus Valle Jr., 33, of Milwaukee; Gennady Levshetz, 61, of Mequon; Trevor Wetselaar, 33, of Milwaukee; Dana Walk, 57, of Delafield; and Dale Hudson, 60, of Waukesha.

Ferrill’s neighbors said he was a married father of two adult children and one younger daughter. They said he had worked at the brewery for about 15 years as an electrician. The Milwaukee Journal Sentinel reported he served in the U.S. Coast Guard from 1987 to 1991 and was honorably discharged.

His brother, Benjamin Ferrill, of The Colony, Texas, told The Associated Press: “It’s a tragic loss to everybody. We’re still trying to digest it.”

Erna Roenspies, who lived next door to Ferrill, described him as a nice guy and helpful neighbor who enjoyed building guns with mail-order parts.

Several years ago Ferrill slipped off or fell off a ladder at the brewery and hurt his shoulder, forcing him to miss work. He told Roenspies that “spies” from the brewery were lurking in the neighborhood, watching his activities to make sure he wasn’t faking the injury. Once he pointed out the spies’ car to her, she said. The spying “irritated” him, she said.

Still, Roenspies, 82, said Ferrill was a “gentleman” who checked up on her to make sure she was all right.

Another neighbor, Elizabeth LaPine, described Ferrill as a quiet person who walked his Doberman pinscher every day, and would sometimes throw a ball around for his dog in the street. She said she lived across the street from Ferrill for 11 years.

LaPine said Ferrill had several cars and always kept them shiny. She said that the last time she saw Ferrill was Sunday, and he had polished up his burgundy Chrysler, which she called his “Sunday car,” and took it for a ride.

The shooting happened at an 82-acre complex that includes a mix of corporate offices and brewing facilities and employs more than 1,000 people. It’s widely known in the Milwaukee area as “Miller Valley,” a reference to the Miller Brewing Co. that is now part of Molson Coors.

Molson Coors CEO Gavin Hattersley said the victims all worked together as electricians and machinists in the complex’s powerhouse.

“They were a part of the fabric of our company and community and we will miss them deeply,” Hattersley said.

Hudson’s Facebook page states that he was married and attended Elkhorn Area High School. A woman who answered the phone at his home had no comment.

Wetselaar’s LinkedIn page says he graduated from UW-Madison and he worked as an engine room operator with Miller Coors since 2018. Before that, he served as a nuclear reactor operator in the U.S. Navy.

Levshetz’s obituary identified him as married with two children and two grandchildren. It said he would be remembered as a “kind, caring, and giving person who always put his family’s needs before his own.”