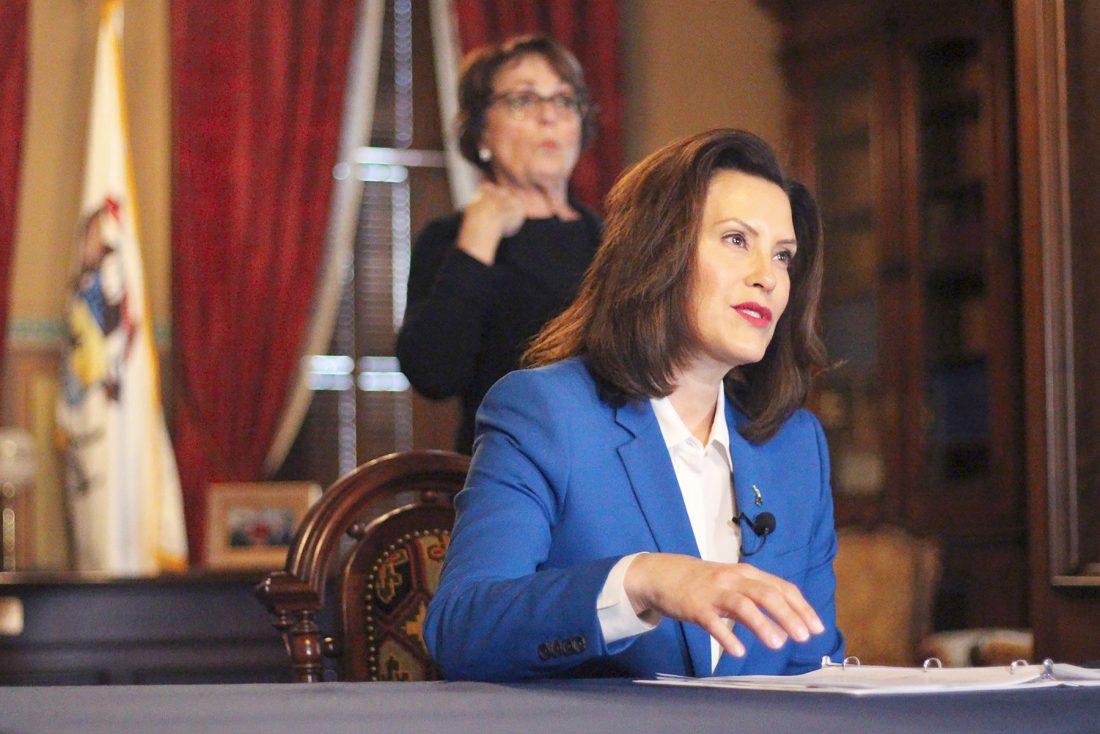 LANSING, Mich. (AP) — Gov. Gretchen Whitmer on Monday told Michigan residents to stay at home, in her most sweeping order of the coronavirus crisis, warning that a million people could need hospital beds if they keep mixing with each other and spreading the illness.

Whitmer talked about dire results akin to those seen in Italy if people do not follow her order. At least 1,328 people have tested positive in Michigan since March 10, and COVID-19 deaths have climbed to 15.

“This disease can’t spread person to person if we’re not out there. … Too many people are still out and about unnecessarily, so we must do more,” Whitmer said.

The order, which takes effect at 12:01 a.m. Tuesday, will prohibit employers from requiring workers to leave their homes unless necessary to protect life or conduct minimum basic operations. It also bars all gatherings of any number outside a single household, except to care for a family member.

“Don’t play fast and loose with what is essential and what’s not. Don’t try to skirt the rules,” said Whitmer, who added that fines against businesses are possible.

Grocery stores, gas stations, banks and pharmacies will be open, and people can run, walk, hike and ride bikes as long as they stay 6 feet from others.

“Do not panic. Do not hoard,” Whitmer said.

Schools will be closed until at least April 13, extending the statewide shutdown by a week. K-12 carry-out food service continues, although the 50,000-student Detroit district called a timeout Monday because too many employees were ill.

A state police spokesman, Lt. Mike Shaw, tried to ease any anxieties about Whitmer’s stay-at-home order: “It’s not martial law. It’s not a lockdown. It’s a way for you to protect your family.”

The policy comes after governors in California, New York, Illinois, Ohio and other states issued similar orders. Whitmer, a Democrat, was backed by Republicans who control the Legislature and business groups, though at least one business organization called for more details on what can remain open.

For most people, the coronavirus causes only mild or moderate symptoms, such as fever and cough. For some, especially older adults and people with existing health problems, it can cause more severe illness, including pneumonia. The vast majority of people recover.

Under certain models, it is possible that more than 70% of Michigan residents — 7 million people — could become infected, and 1 million would need to be admitted to hospitals, unless the virus is slowed down, Whitmer warned.

“We have about 25,000 acute beds in Michigan. Think about that,” the governor said. “That’s where we are headed currently.”

The goal, she said, is to buy time so hospitals are not overwhelmed and have a “fighting chance” by creating surge capacity, accelerating testing and developing therapeutic drugs.

Whitmer tried to reduce the spread by limiting crowds at popular gathering spots and closing schools. Bars, fitness clubs and theaters are closed, and restaurants can only prepare food for carry-out.

While food stores will remain open, retail trade groups are urging members to stop accepting empty cans and bottles, which carry a 10-cent deposit in Michigan. The groups said the virus can live on glass, plastic and metal, putting employees at risk.

In Detroit, Mayor Mike Duggan said 282 police officers were off work awaiting test results or self-quarantining, although 152 will return by the end of the week. Daily bus service will be reduced to Saturday-style routes.

“If you stay home, watch TV and play video games, you are making a real contribution,” Duggan told residents.

The University of Michigan extended a ban on in-person classes to the spring and summer terms, which start May 5.

Even fishing is not immune. The state will wait until mid-May before stocking mature trout in the Huron River in Oakland County and Spring Mill Pond in Livingston County. Officials do not want excited anglers getting close to each other to land a big brown trout.

LANSING, Mich. (AP) — Gov. Gretchen Whitmer said Michigan is probably a month away from reaching the peak of the ...

What’s on the ballot for Wisconsin counties in the region

Judicial races for courts in Florence, Forest and Marinette counties will highlight local elections Tuesday. In ...

— The Island Resort and Casino will be closed until further notice. Management will monitor the coronavirus ...