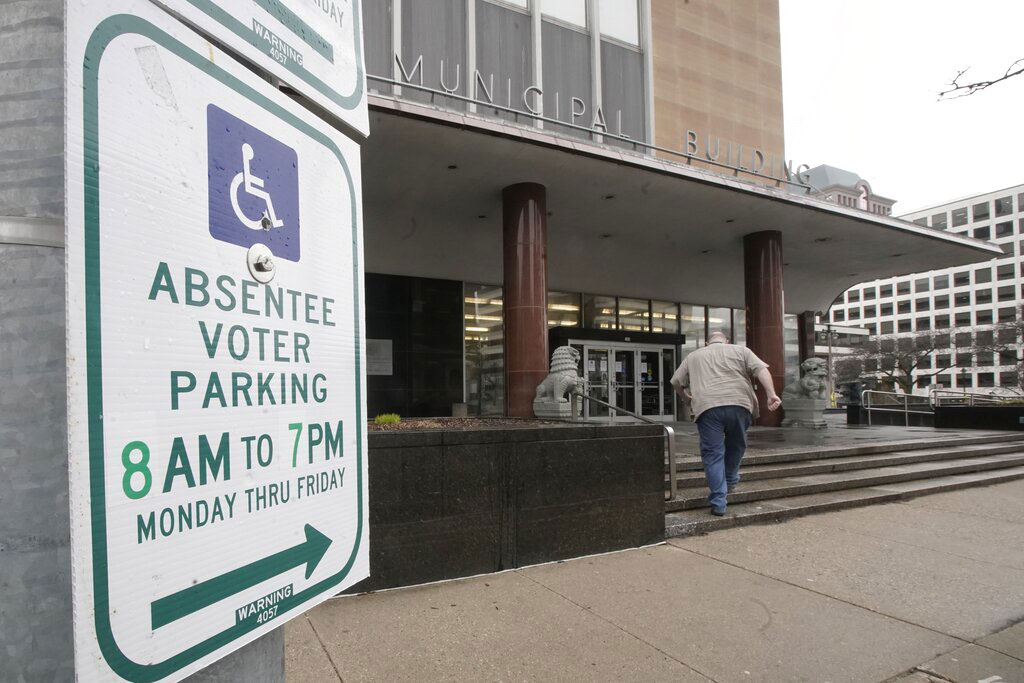 MADISON, Wis. (AP) — Wisconsin could face a litany of problems if it holds its spring election amid the coronavirus crisis, including a possible disruption in mail service interfering with absentee voting, a lack of polling sites and the risk of exposing elderly poll workers and voters to the disease, the state’s chief elections officer said Wednesday.

The election is scheduled for April 7. It features the state’s presidential primary, a state Supreme Court race, a referendum on a state constitutional amendment that would establish rights for crime victims and various local elections.

Social distancing mandates have raised questions about whether Wisconsin should postpone its election, as Georgia, Louisiana and Ohio have done. Three states went ahead with their primaries on Tuesday, and some problems popped up, including in Chicago, where officials had to scramble to replace about 50 area polling sites that decided to cancel at the last minute.

But Gov. Tony Evers has insisted the election go on as scheduled, noting that postponing it could leave countless local offices vacant. He has encouraged people to vote by absentee ballot. His fellow Democrats filed a federal lawsuit late Wednesday to demanding a judge relax deadlines and other requirements for absentee voting to make the process easier.

Still, pressure mounted during the day to push the election off.

“I no longer believe that we are able to fairly and properly administer this election without a delay,” Wisconsin Elections Commissioner Ann Jacobs said during an emergency meeting Wednesday evening. “I believe we’re putting people at risk.”

Local clerks face a host of challenges if the election goes on as scheduled, elections commission Administrator Meagan Wolfe wrote in a memo Wednesday.

Wolfe opened her analysis by pointing out that postponement would take a court order, an order from the governor or an act of the Legislature. The state Senate’s majority leader, Scott Fitzgerald, has said that’s not going to happen.

Wolfe went on to outline a host of possible problems.

A potential U.S. Postal Service shutdown could delay delivery and return of absentee ballots and therefore delay counting on election night. Wolfe said that local clerks might have to ask post offices to hold ballots and pick them up themselves.

As of Tuesday, Wisconsin voters had cast about 173,775 absentee ballots for the election, according to the commission. That’s more absentee ballots cast than were requested in each of the previous three spring elections dating back to 2017, and there’s still three weeks to submit them.

Concerns are rising that Evers’ order closing schools and banning visitors to nursing homes could reduce the number of physical polling places in such structures, Wolfe said. Clerks should consider relocating polling sites to places like fairgrounds, private gyms, park pavilions or government buildings with meeting space, she said.

More than half of Wisconsin poll workers are over age 60, making them especially vulnerable to the virus, Wolfe went on. Commission staffers have directed clerks to build lists of replacements such as high school or college students in case workers fall ill or don’t show up. Clerks should be ready to deputize people and give them crash training courses in election administration, Wolfe wrote.

Clerks also have complained to the commission about the lack of hand sanitizer and other cleaning products, but Wolfe said there simply isn’t any available.

Commissioners also should think about whether to deliver absentee ballots to people who are quarantined in their homes, Wolfe wrote.

State law already allows agents acting on behalf of hospitalized voters to pick up absentee ballots from a clerk, deliver them to the voter and then return the ballot to the clerk. The commission could decide to interpret state law as including people quarantined at home due to the virus as hospitalized voters. But that would create another raft of problems because agents would have to interact with infected voters and clerks.