A WORKER HANDS out disinfectant wipes and pens as voters line up outside Riverside High School for Wisconsin’s primary election Tuesday in Milwaukee. (AP Photo/Morry Gash) 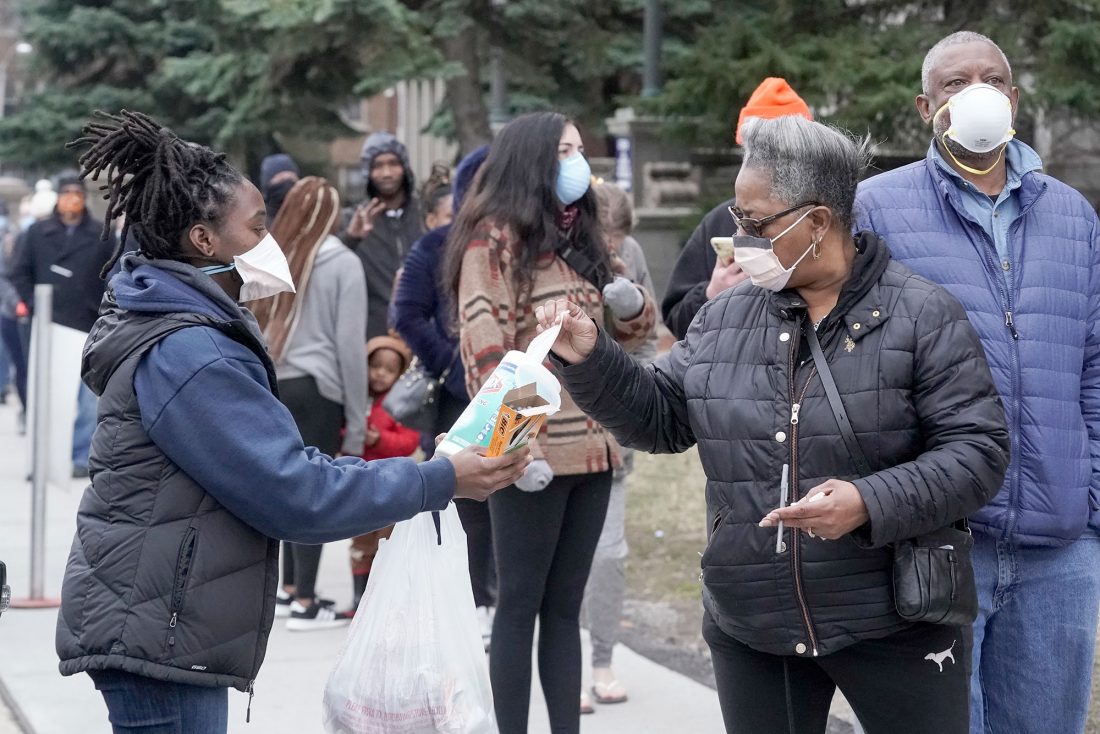 A WORKER HANDS out disinfectant wipes and pens as voters line up outside Riverside High School for Wisconsin’s primary election Tuesday in Milwaukee. (AP Photo/Morry Gash)

MADISON, Wis. (AP) — If Wisconsin was a test case for voting in the age of the coronavirus, it did not go well for many voters.

Thousands were forced to congregate for hours in long lines Tuesday with no protective gear. Thousands more stayed home, unwilling to risk their health and unable to be counted because requested absentee ballots never arrived.

Voters reported being afraid, angry and embarrassed by the state’s unwillingness to postpone their presidential primary elections as more than a dozen other states have already done. Neither Joe Biden nor Bernie Sanders will be declared a winner at least until next Monday in accordance with one of several court orders that shaped the contest.

And there was evidence that minority voters were disproportionately impacted by widespread poll closures in their communities. Michael Claus, 66, wore a protective mask and a Tuskegee Airmen cap, as he waited to vote.

The African American man said he tried to vote absentee and requested a ballot in March but it never showed up. His only option was to vote in person. He blamed the Republican-controlled state legislature. 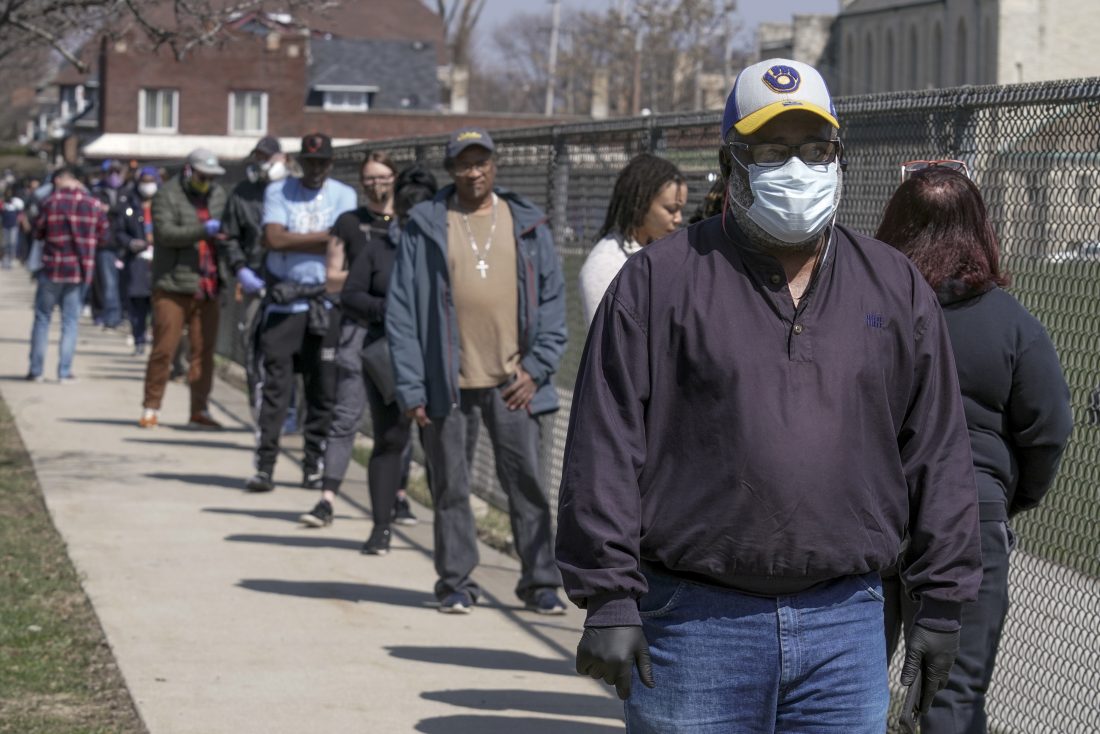 Voters observe social distancing guidelines as they wait in line to cast ballots at Washington High School while ignoring a stay-at-home order over the coronavirus threat to vote in the state's presidential primary election Tuesday in Milwaukee. (AP Photo/Morry Gash)

“They could have delayed the election with no problem,” Claus said. “They decided if they can suppress the vote in Milwaukee and Madison, where you have a large minority presence, you can get people elected you want elected. And that’s sad.”

The chaos in Wisconsin, a premiere general election battleground, was expected to reverberate across states that still have primaries ahead. Alaska, Wyoming and Ohio are conducting contests by mail this month, and other states, including Georgia, are slated to hold in-person voting in May.

Election experts warned that Wisconsin was an example of what not to do. And the experience added immediate context to the broader debate about protecting voting rights this November.

With results not coming until next week, the state did not offer Biden the knockout blow he hoped for in his presidential nomination fight against Sanders. The candidates spoke out late Tuesday on separate livestreams from the safety of their homes hundreds of miles away but had little to say about the Wisconsin contest. 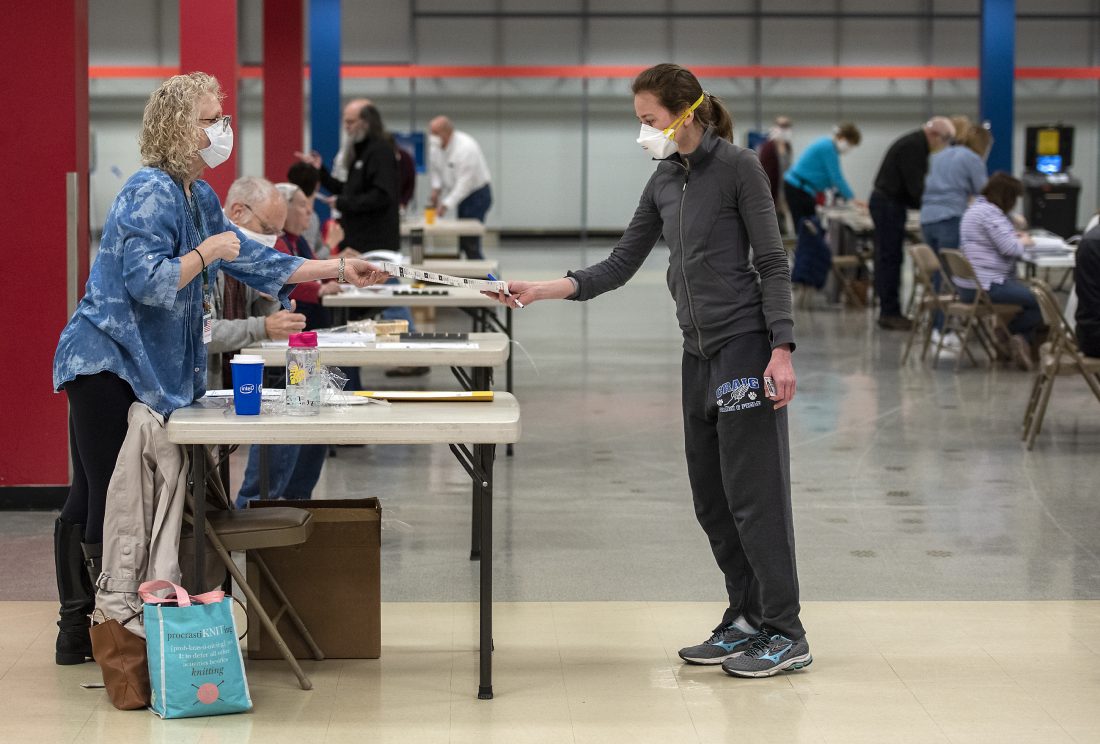 Bridget McDonald, right, receives a ballot from poll worker Patty Piek-Groth on Tuesday at the Janesville Mall in Janesville, Wis. Hundreds of voters in Wisconsin are waiting in line to cast ballots at polling places for the state's presidential primary election, ignoring a stay-at-home order over the coronavirus threat. (Angela Major/The Janesville Gazette via AP)

Sanders didn’t say a word about the election on Tuesday after warning the night before that the holding the election was “dangerous” and “may prove deadly.” Biden, too, said in-person voting shouldn’t have taken place.

Lest there be any doubt about the GOP’s motivation, President Donald Trump on Tuesday broke from health experts who have encouraged all Americans to stay home by calling on his supporters to “get out and vote NOW” for the conservative judicial candidate.

The election was unlike virtually any other in recent memory. Milwaukee, the state’s largest city, opened just five of its 180 traditional polling places, forced to downsize after hundreds of poll workers stepped down because of health risks. The ensuing logjam forced voters to wait together in lines spanning several blocks in some cases. Many did not have facial coverings.

As of Tuesday night, Wisconsin reported more than 2,500 coronavirus infections and 92 related deaths — 49 of them in Milwaukee County, where the voting lines were longest.

Milwaukee is home to the state’s largest concentration of black voters, a community that has been hit harder than others during the pandemic. Reduced minority turnout would benefit Republicans in a series of state and local elections.

The unprecedented challenge created chaotic scenes across the state — and a variety of health risks for voters and the elected officials who fought to keep polls open.

They included Robin Vos, the Republican speaker of the state Assembly, who joined more than 2,500 National Guard troops dispatched to help staff voting stations. While many voters stranded in lines for more than an hour did not have any protective equipment, Vos donned a face mask, safety glasses, gloves and a full protective gown.

In Madison, city workers erected Plexiglas barriers to protect poll workers, and voters were encouraged to bring their own pens to mark the ballots.

Tens of thousands of voters who received absentee ballots had not returned them as of Tuesday, Albrecht said. He noted that his office received hundreds of calls from people who didn’t get an absentee ballot or were concerned theirs hadn’t been delivered to election officials.

The Wisconsin Elections Commission indicated voters had returned at least three-quarters of the absentee ballots they requested in time for them to count in the state’s spring election and more could be in the mail.

Voters had until 8 p.m. Tuesday to drop absentee ballots off at the polls. Clerks also will accept any ballots postmarked Tuesday that they receive through the mail until April 13, which means clerks could get more ballots in the mail in the coming days.

Milwaukee resident Megan Nakkula, 30, was forced to vote in person after requesting an absentee ballot but never receiving it.

“It’s been a very emotional day thinking about what the outcome of this could be,” she said, holding back tears. “It just doesn’t feel like it was the safest decision to do. I saw a lot of elderly voters, people who were high risk and everyone is taking as many precautions as they could. We were 6 feet apart, but you know, we don’t know what we don’t know about this virus at this point in time, and it’s really scary.”