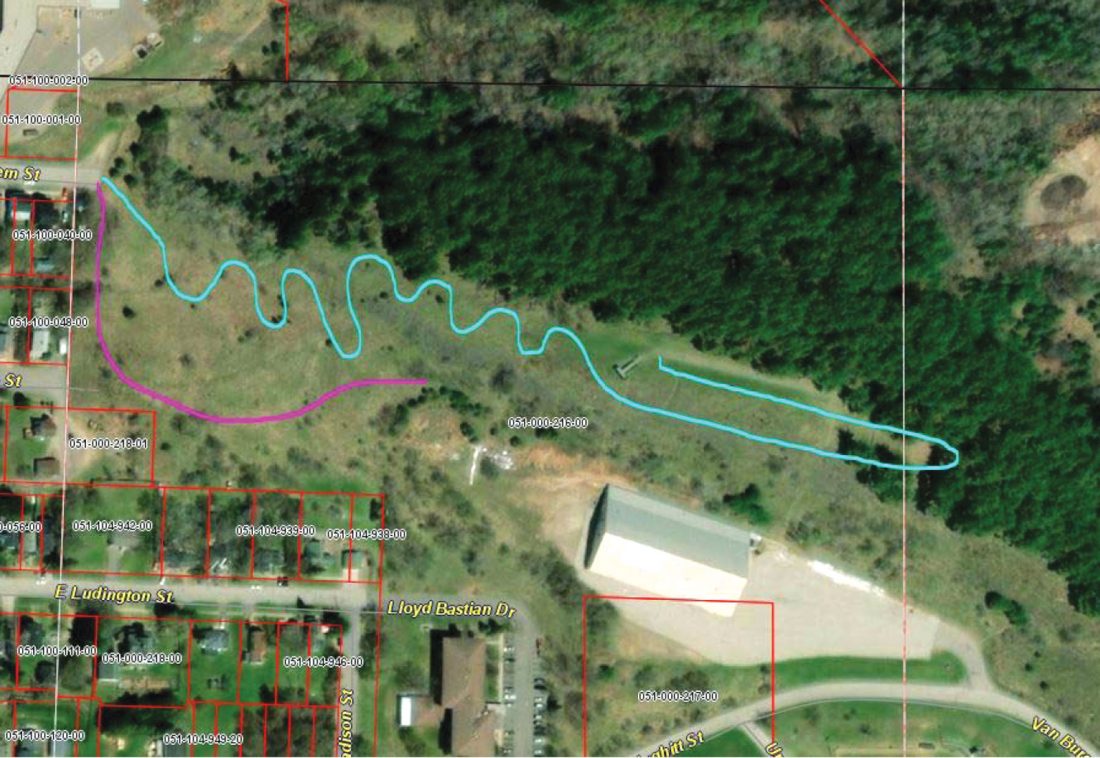 A MAP FROM the Dickinson Trail Network shows two routes, in pink and blue, planned for construction this year as part of its Millie Hill mountain bike trail network. The building at lower center is the Mountain View Ice Arena. Existing trails are mostly to the north of the routes shown.

Construction on the first phase was launched in 2019, with volunteers creating several non-motorized multi-use routes east of the Chapin Pit. Two more trails will be added this year — again by volunteers — to the north and west of Mountain View Ice Arena.

The second phase is more ambitious, carrying the potential to create 4 to 6 miles of trails. DTN plans to hire Traxon Trailworx of Viroqua, Wis., to lay out a design, place flags and create a detailed proposal, Susott said.

The planning work for the second phase is expected to cost $4,524, while construction is roughly estimated at $100,000. If the money can’t be acquired through fundraising and grants, DTN has the option of using the blueprints to start work on its own, Susott said.

This year’s trail work will be visible from downtown, he said. The second phase will be at a higher elevation at the end of East B Street to the top of a hill that has a water tower and antennas.

DTN’s estimated cost for the first phase is $10,000, which includes insurance for volunteers, trail maintenance and signage. Trails are being built with hand tools and a Bobcat compact excavator owned and insured by DTN and used only by trained personnel.

The council Monday adopted a land use agreement with DTN to formalize expectations between the city and the non-profit group.

The multi-use routes — open to mountain bikers, hikers and trail runners — are to be built to International Mountain Bike Association standards to ensure sustainability, erosion resistance and minimal environmental impact. The city will be a named insured on DTN’s liability policy.

DTN sees the mountain bike trail system as an economic boost, helping draw young professionals and their families as well as tourists.

City Manager Jordan Stanchina agreed. “This is some progress that helps,” he said.

In combination with routes at Fumee Lake, Norway and Pine Mountain, and the state’s Iron Belle Trail, among others, DTN envisions a multi-million-dollar benefit to the local economy.

In other action, the council:

— Heard Stanchina encourage residents to participate in the 2020 U.S. Census, noting it’s crucial to funding from the federal and state governments.

— Reported that paving of streets and alleys under a city bid awarded last month to Bacco Construction Co. should be completed this week.

— In light of the pandemic, agreed to allow refunds for any pavilion rentals canceled at City Park during the 2020 season.

— Heard Mayor Dale Alessandrini continued to encourage compliance with stay-at-home and social distancing orders. “Hopefully we can keep this thing under control,” he said. “I know I’m beating a dead horse, but it’s worth saying.”

— Approved a request from the firefighters union to extend the use of personal leave days in this fiscal year from the current deadline of June 30 to Dec. 31.

— Noted that alley pickup has resumed for garbage collections.