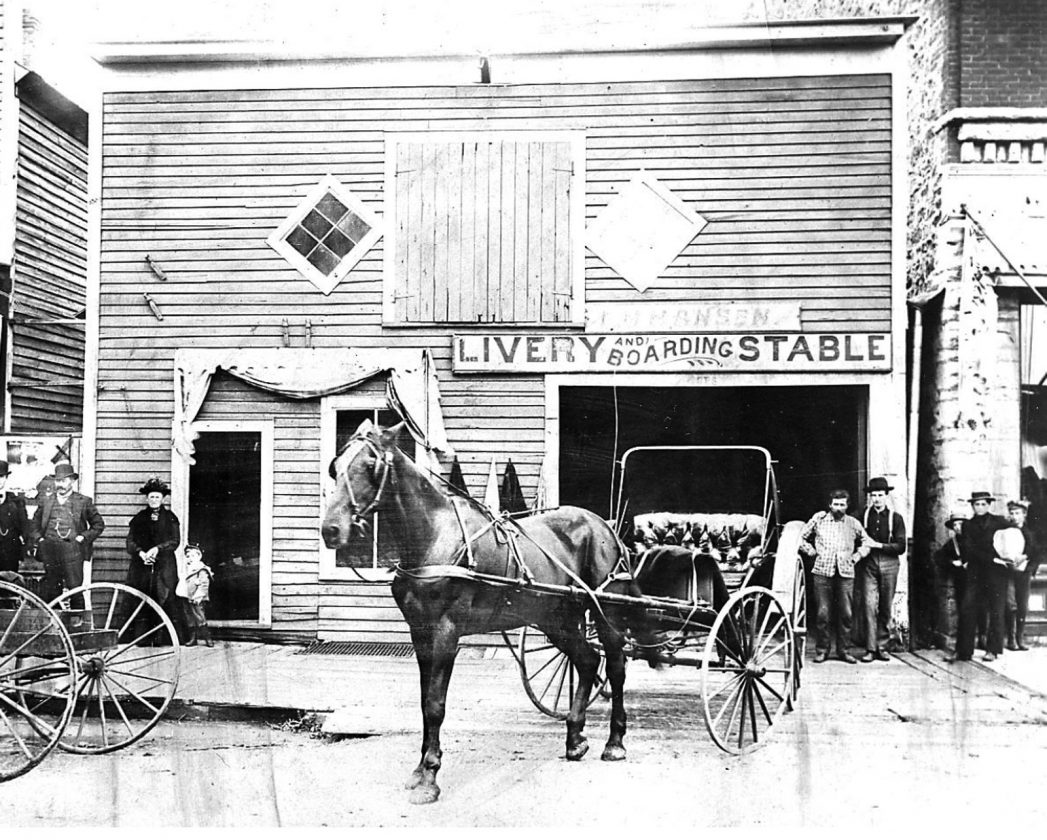 Louis M. Hansen operated a livery and boarding stable at 413 South Stephenson Ave. by 1892 and lived at 405 South Stephenson Ave. By 1902 Hansen had expanded his livery stable to include 411-413 South Stephenson Ave., and also operated an undertaking parlor at 217 East Hughitt St. in the Robbins Block. Hansen still ran his livery stable at this address in 1907. In late March 1909, Hansen purchased the former Halvar Person livery stable, across from the Dickinson County Courthouse at 623 South Stephenson Ave., from Andrew Bjorkman. The north corner of the M. Levy Co. (later Levy & Unger) store, one of Iron Mountain’s major early department stores, is visible at the far right. The structure later housed the J.C. Penny Company and was home to the Western Auto Store when the central portion of the 400 block was destroyed by fire on Sunday evening, Feb. 28, 1982. (Menominee Range Historical Museum)

There was no listing for 407 South Stephenson Ave. in 1892 or 1902. William Carbis appeared at this address on the street index in 1907, but the name should have been John T. Carbis, who sold “real estate and insurance” and also was the manager of the Menominee Range Employment Agency at this location. William J. Carbis, of Wills & Carbis, sold “groceries and meats” at 203 South Stephenson Ave. in 1907. John T. Carbis still sold real estate and managed the Menominee Range Employment Agency here in 1913.

In the Jan. 29, 1924 edition of the Iron Mountain News the “grand opening ball” of the new Jacobs-Khoury Company building, located at 407 South Stephenson Ave., was announced as follows under this headline – “Dancing To Feature Opening of New Store”:

“An informal grand opening ball will be given tomorrow night by the Jacobs-Khoury company at the firm’s new building on Stephenson avenue. The building, located between the Parent Clothing and the Levy-Unger stores, was recently completed. Large blue and white signs, advertising the coming event, have been erected in the show windows of the building. They are illuminated at night by colored spotlights.

“Reenee’s Danceland Charmers, of Menominee, Mich., have been engaged to play. The orchestra features “Al” Reenee, pianist, formerly with the Isham Jones orchestra and also of radio fame. The special dance numbers will include several spotlight dances.”

An article in the Feb. 28, 1924, edition of the Iron Mountain News announced that the Jacobs Jewelry Store was “ready for business in its new home, on the second floor of the recently-erected Jacobs Building, 407 South Stephenson Avenue.”

An extensive credit system was to be inaugurated according to Sam Jacobs, proprietor. A complete line of Brunswick phonographs, watches, diamonds and silverware was to be carried, according to Jacobs, who moved that week from the Iron Mountain Mercantile Company, Ltd. building on 118-122 West B St.

On Friday evening, March 14, 1924, the Stern & Field Company’s store located in the recently-erected Jacobs Building, 407 South Stephenson Ave., held a musical program, inviting the public to visit the newly-opened men’s clothing establishment. The formal opening of the store, specializing in men’s clothing and furnishings, was held on Saturday, March 15, 1924.

Members of the Stern & Field Company were Hugo Field, of Hancock; Sam M. Field, of Moorehead, Minn.; Sigmund Stern, of Marquette; Herbert Stern, of Iron Mountain; and Noe Bertrand, of Iron Mountain. The last two men were in charge of the Iron Mountain store, the sixth and newest of a chain of stores operated by the company — four in the Upper Peninsula, one in Minnesota and one in South Dakota.

The fixtures, built especially for the store by a Grand Rapids, Michigan, manufacturing concern, represented an investment of approximately $10,000 and were modern in every respect, including wall display cabinets of the latest design, attractive counters and floor display cabinets. The display windows were of the arcade type with two entrances. A special color scheme was used in the windows, being arranged by artists.

The Phelps-Drake Company built much of the Ford Plant in Kingsford and many of the public schools erected in the 1920s.

On Friday, June 5, 1925, Mrs. Sam Jacobs opened the French Gray Shop, handling a complete line of ladies’ wearing apparel, on the second floor of the Jacobs Building, 407 South Stephenson Ave. The fixtures in the store were attractively finished in French gray. In addition to the complete line of dress apparel, imported handwork and fancy work was also handled. Japanese handkerchiefs were given as favors to the first 50 customers at the grand opening.

By 1935 the Great Atlantic & Pacific Company (A & P) Tea Company grocery store was located at 407 South Stephenson Ave. At that time John B. Whitney, a barber working for A. Iver Harding’s barbershop at 105 East Hughitt St., lived upstairs with his wife Sophia. Samuel J. “Bokey” Khoury operated a billiards parlor in the basement.

In the 1939 city directory the Great Atlantic & Pacific (A & P) Tea Company, managed by Harry Hanson, was still listed at this address. In addition, the Avenue Bar, Samuel J. “Bokey” Khoury, proprietor, was located in the basement, and the following businesses and apartments were on the second floor: The Grey Shoppe, Maggie Jacobs, proprietor; Samuel J. Khoury; Patty’s Beauty Shop, Patty Whitford, proprietor; Donald Walters, employee at the Von Platen Fox Company, and his wife Ellen; Edward Jacobs, a teacher at the Kingsford Schools.

In the 1941 city directory the Great Atlantic & Pacific (A & P) Tea Company still occupied the ground floor of the Jacobs Building with Gordon Hanson listed as manager. Samuel J. “Bokey” Khoury still operated the Avenue Bar in the basement, and upstairs Maggie Khoury continued to operate The Grey Shoppe, Patty Whitford did hair at Patty’s Beauty Shop, and Earl H. Christensen, a clerk at the A & P Store, and his wife Blanche resided in an apartment.

The Avenue Bar was operated by Nicholas J. Khoury, brother of Samuel John “Bokey” Khoury by 1959 and continued under his ownership until 1970. “Bokey Khoury died in August 1960. Gerald Mitchelson took over the establishment from 1971-1977.

In 1978 Joseph Jafolla began operating Joey Jaff’s where the Avenue Bar had been earlier. In 1984-1985 John Jacobs took over, calling his business Dear John’s Tavern. By 1988 Dave Walters operated the Varsity Club here.

The first floor of the Khoury Building was incorporated into the S.S. Kresge Company building in 1948 through a lease agreement with access to the new business space provided through three doorways cut through the wall.

In 1988 the site was first occupied by the McCrory Store, a five and dime variety chain store based in York, Pennsylvania, and sometimes known as J.G. McCrory.

According to Don Khoury the roof of the northern portion of the S.S. Kresge Company building caved in, probably due to the weight from a late snowfall, in early May 1996. The building at 401-405 South Stephenson Ave. was later torn down shortly thereafter and the Anderson Tackman & Company building was constructed the following year. The Khoury building remained, and still stands in 2020.

In Walter R. Nursey’s 1891 book “The Menominee Iron Range: Its Cities, Their Industries and Resources” A.I. Leveque, located at 409 South Stephenson Ave., advertised as a “Dealer in Watches, Clocks, Jewelry, Etc. – Also a Fine Selection of Souvenir Spoons and Birthday Rings.” However, by 1892 he was located at 323 South Stephenson Ave., dealing in “Watches, Clocks, Jewelry, Silverware, Optical Goods and Musical Instruments.”

His full-page advertisement noted he was a “Dealer in Wines, Liquors and Foreign and Domestic Cigars” adding “These Sample Rooms are new and Finely Refitted and Furnished.” It was also noted that “His Bottled Goods and Mixed Drinks Invite Inspection.”

Clifford also lived at 409 South Stephenson Ave., as did John Clifford, who worked as a “clerk” in Clifford’s sample rooms. There was no listing for this address in 1902. Khoury Brothers were listed on the street index at this address in 1907, but the only alphabetical listing at this address at that time was for Sam Khoury, a salesman, who lived here with his wife Susie Khoury. Paul Khoury sold confectionery and fruits here in 1913 with Samuel I. Khoury listed as manager.

Under “Brief City News” in the March 24, 1910, edition of the Iron Mountain Press the following item was reported:

“The old livery barn on Stephenson avenue, occupied by L.M. Hansen for a long term of years, is being demolished preparatory to the erection of a brick block by Messrs. Cook and Pelham, owners of the property.”

By 1911, the M. Levy Company needed to expand its operations which were located at 415-419 South Stephenson Ave. An article in the Iron Mountain Press on June 22, 1911 announced:

“The M. Levy Company has leased the handsome Cook & Pelham Block for a term of ten years and taken possession. Carpenters are now engaged in building the counters and fixtures. It is the intention of the company to occupy the building with their grocery, china, glassware and graniteware departments. This will permit the enlargement of other departments in the company building.”

In the July 20, 1911, edition of the Iron Mountain Press an article noted the M. Levy Company was moving the grocery and allied departments to the new Cook & Pelham building.

Rene Savoie continued to operate Ace Drugs, Inc. until 1980. Beginning in 1971 Ace Drugs, Inc. was listed as a Walgreen Agency. The Ace Beauty Shop also operated during these years.

Read the rest of this 18-page story on the Dickinson County Library’s website (www.dcl-lib.org) which includes additional information, thirteen photographs and four advertisements.