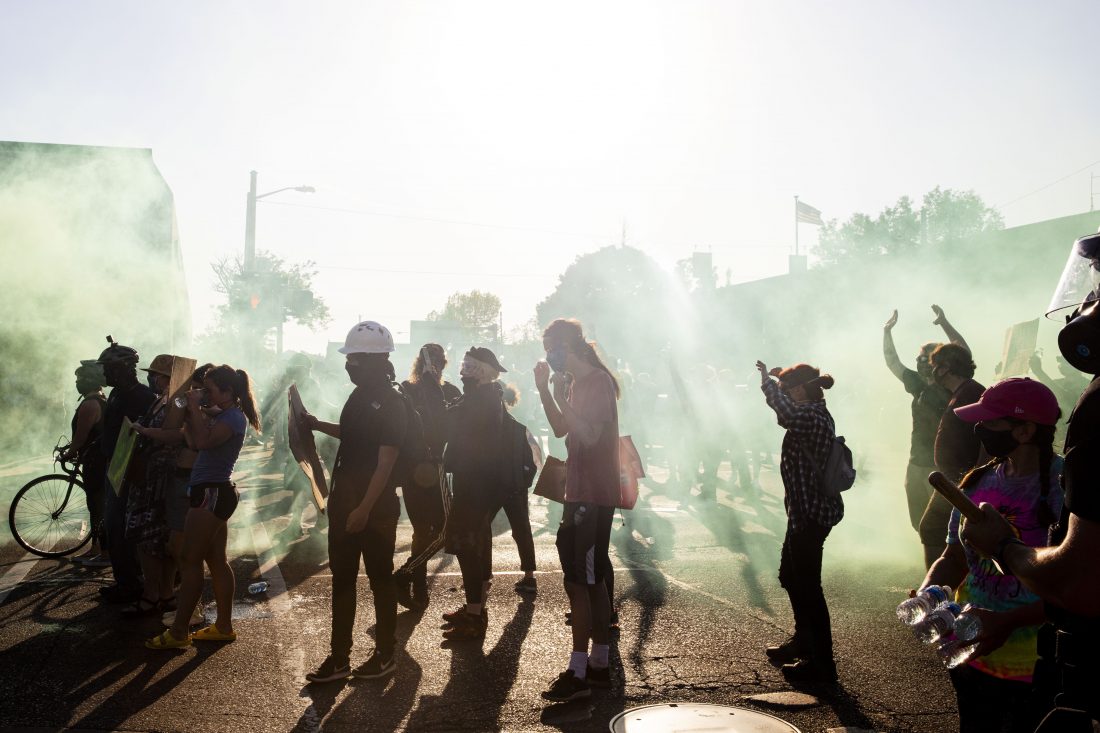 Scenes from the protest in downtown Kalamazoo, Michigan on Tuesday, June 2, 2020. After 35 to 40 minutes of reasoning with the police after violating curfew crowds were dispersed using CS gas and mace pellets. The City of Kalamazoo imposed a curfew from 7 p.m. until 5 a.m. on Wednesday, June 3 after late night vandalism the morning before. (Joel Bissell/Kalamazoo Gazette via AP)

She also urged law enforcement agencies to implement policies so officers must intervene if they see a colleague doing something inappropriate or illegal.

In a statement, Whitmer said the police slayings of Floyd in Minnesota and Breonna Taylor in Kentucky and the killing of Ahmaud Arbery in Georgia “were a result of hundreds of years of inequity and institutional racism against black Americans.” She urged police departments to toughen their training and policies, and said she will partner with the Legislature and law enforcement to enact bills.

Whitmer did not immediately push for changes on the use of force, however.

“We recognize the shortcomings of the systems in place today — systems that have left black, Latino and other communities of color feeling underserved, even threatened by law enforcement,” said Lt. Gov. Garlin Gilchrist II, who is African American.

Even before the Democratic governor’s announcement, a Republican-led Senate committee planned to hold a hearing on a Democratic-sponsored bill that would, starting in 2022, require officers to complete training on implicit bias, de-escalation techniques and mental health screening. Some Michigan police departments already mandate some form of such training, but Sen. Jeff Irwin of Ann Arbor said it should be universal.

The panel and full Senate prepared to quickly pass the measure Thursday, just a week after its introduction.

House Democrats on Wednesday unsuccessfully tried amending a coronavirus spending bill to prohibit officers that receive hazard pay from using knee holds and choke holds as restraint practices. Floyd died after an officer pressed his knee into his neck for several minutes even after he stopped moving and pleading for air.

“This would be but a small first step on the long path towards achieving justice and effectuating change,” said Rep. Abdullah Hammoud of Dearborn.

Since Floyd’s death last week in Minneapolis, there have been several protests across Michigan against police abuses and racial injustice, with some cities instituting curfews to stop property damage and violence and deploying tear gas to disperse crowds.

In Detroit, police chief James Craig allowed protesters to march beyond a curfew during a sixth straight day of demonstrations, calling it “discretionary” after 127 people were arrested Tuesday, mostly for violating the curfew. He said it was a “day of unity, a day of celebration” as prosecutors charged three more officers in Floyd’s death.

“They’re peaceful as everybody can see,” Craig told reporters. “There’s no problems. They want their voices heard, and we support that. We’re making the decision to support them.”

In Grand Rapids, police chief Eric Payne and Kent County Sheriff Michelle LaJoye-Young took knees with protesters. In Lansing, demonstrators lay face down with their hands behind their backs on the street in front of the state Capitol.

Whitmer requested that the Michigan Commission on Law Enforcement Standards give guidance to law enforcement agencies on continuing education. According to a 2017 report delivered to then-Gov. Rick Snyder by MCOLES, which licenses officers, Michigan was among only six states to not mandate in-service training for active-duty police.

Firearms recertification is the only annual standard required by MCOLES, though the state police require its troopers to complete annual training on other topics.

The governor said the department is working to recruit minority troopers, has created an equity and inclusion officer position, and has hired community service troopers to focus on community outreach efforts such as mentoring youth.