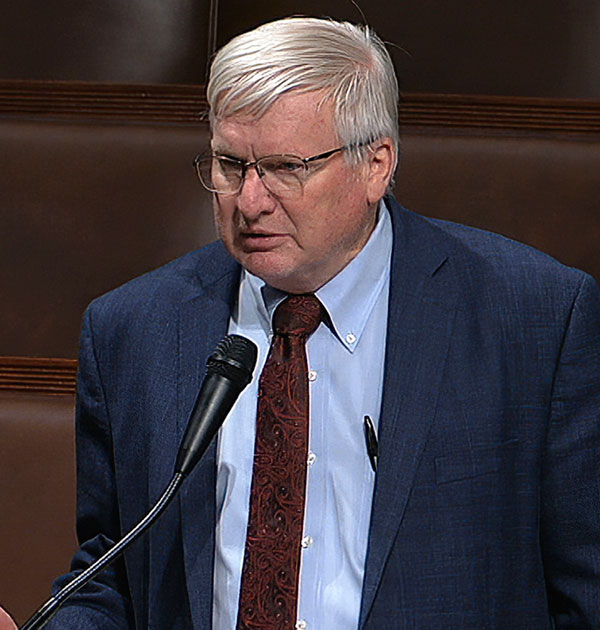 MADISON, Wis. (AP) — A Wisconsin congressman whose coughing fit at the state Republican Party convention drew widespread attention because masks were not required at the event was suffering from nothing more than a dry throat, his campaign said Monday.

U.S. Rep. Glenn Grothman, 65, began coughing uncontrollably Saturday when he began his speech at the convention before about 300 attendees at a Green Bay conference center. The event proceeded even as Wisconsin has seen a spike in coronavirus cases, breaking a daily record for newly confirmed cases for a third straight day on the day of the convention.

“It’s time to talk about Donald John Trump,” said an unmasked Grothman, before coughing for about 10 seconds and loosening his tie. Grothman regained his composure and proceeded to give a defense of Trump’s first term in office on a variety of issues.

One clip of him coughing that circulated on Twitter had been viewed more than 4.3 million times as of Monday morning. Democratic U.S. Rep. Mark Pocan, who represents the Madison area in Congress, commented on Grothman’s coughing with, “Wow.”

“Congressman Grothman’s cough was due to a dry throat and a need for a drink of water,” Grothman’s campaign manager Alec Hanna said in an email Monday. “It has not persisted and he is exhibiting no other symptoms associated with COVID-19. He previously took a COVID-19 test, with a negative result.”

Attendees at the state GOP convention were provided masks but not required to wear them. The Wisconsin Democratic Party held an all-virtual state convention in June due to concerns over COVID-19. The Democratic National Convention is slated to be held in Milwaukee in August, but will be greatly scaled back due to the pandemic.

Trump won Wisconsin by fewer than 23,000 votes in 2016 and it’s a key battleground state in this year’s election, as well. Polls have shown Democrat Joe Biden with a lead, but the polls in 2016 also showed Democrat Hillary Clinton leading Trump at this point.

Mercedes Schlapp, a Trump adviser who is Cuban American, and Katrina Pierson, who is Black and worked on Trump’s 2016 campaign, headlined the convention. They participated in a women for Trump bus tour in Wisconsin leading up to them speaking at the convention.

Both women described Trump as a “law and order” president.

Speaking to a mostly white audience, Pierson said Republicans have the “moral authority to stand strong and fight back” and win over minority voters.

“And that is why the Black voices for Trump coalition will be taking on Black Lives Matter,” she said. “Because we have the candidate who has the policies that prove Black lives matter because he believes that all lives matter.”

Schlapp said Trump will keep communities safe and stand by police. She contrasted him with Biden and Democrats, who Schlapp said “let the left mobs destroy our cities. … These Democrats want to rewrite our past, they want to erase history, that’s why they tear these statues down.”

Wisconsin Democratic Party spokesman Phil Shulman dismissed the comments as “delusional conspiracy theories and outright lies that will continue to put Wisconsinites and Americans everywhere at risk and cost Trump the presidency.”