UP butterflies are flashing strong numbers 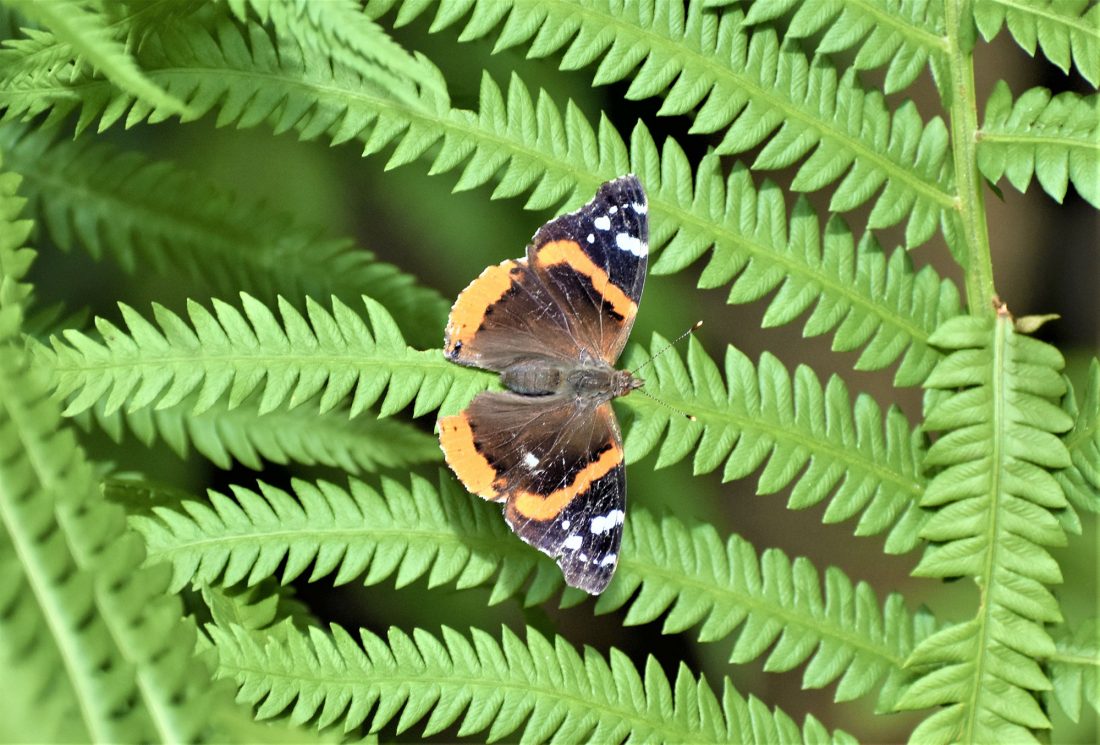 Midsummer in the Upper Peninsula can provide some of the prime colors nature has to offer, both in flora and fauna.

Wildflowers are out in full glory and, not surprisingly, so are the butterflies that look to them for nectar and perhaps foliage to feed their caterpillars.

Whether sparked by timely rains, warmer temperatures or both, the green, blooming plants seem to be having a good summer so far — and, in turn, the fluttering, flashy butterflies are showing strong numbers.

Conspicuously absent are the Canadian tiger swallowtails but that’s to be expected. Its breeding season doesn’t last long into July, so its numbers are far reduced by now. It has only one “flight,” the term for when adults emerge to breed, per year.

But their offspring still may be found on its host plants: birches, poplars, aspen, cottonwoods, apple trees and black cherry. They start out looking like a bird dropping but change as they age to a bright green with eye-like head spots that vaguely make them look like a small snake. These caterpillars will weather the winter as pupae, emerging as adult tiger swallowtails in May to start the cycle again. 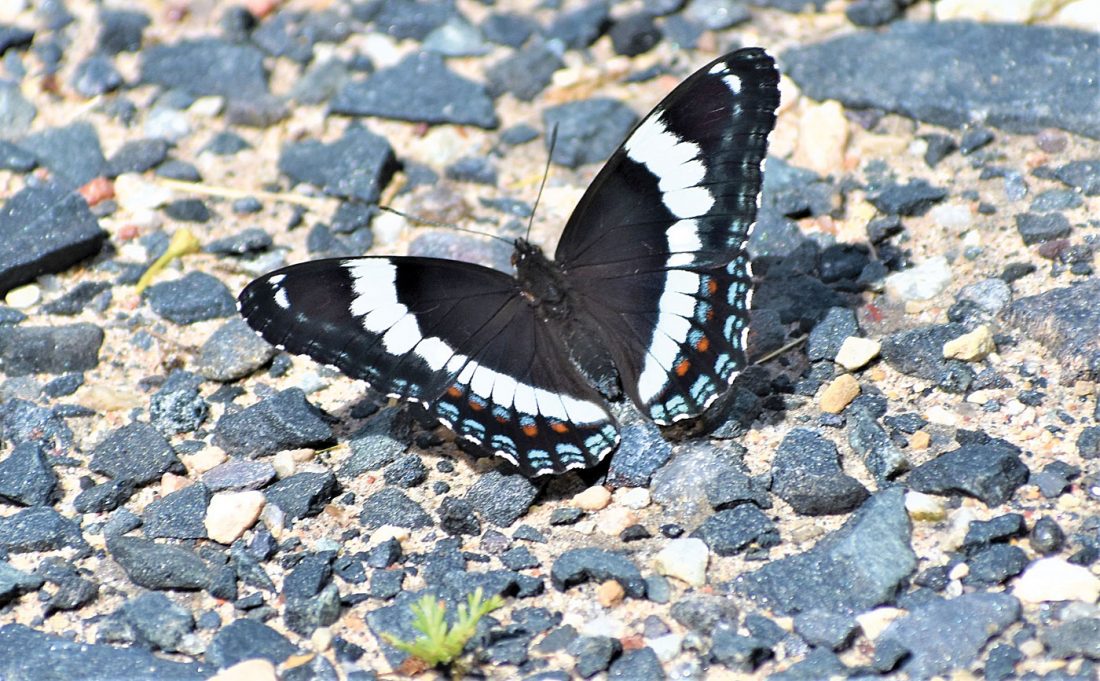 Others, such as the beloved monarch, will have multiple broods in a summer, culminating in ones that in September begin making the journey south. The first batch produced by those that returned to the region this spring now are flying and mating, to give rise to that final migratory group.

Some of the other butterflies still out there right now:

— White admiral: This is not at first glance a particularly colorful butterfly, but its dark black wings with broad white stripe make it instantly recognizable. On closer look, it also has rows of red and blue spots along the hind wings. It has two broods from spring through October, raised on willow, aspen, popular and birch. The late summer brood overwinter as caterpillars.

— Red admiral: Despite the similar name, red admirals actually are not that closely related to white admirals. It also is much more widespread, found in Britain and Ireland, Europe, northern Africa, Eurasia, Hawaii, New Zealand and some of the Caribbean Islands. Its host plant is nettles, particularly stinging nettles. They also migrate, perhaps not as far as monarchs but have been known to reach northern Texas.

— Commas: The one shown is a gray comma, but this area also has the very similar eastern comma and might even have green commas, which have been found in neighboring Florence County but are uncommon. All commas have black and orange upper wings but gray or brown, leaf-like underwings, which can make for quite the contrast when the butterfly flaps. They are distinctive from other black and orange butterflies by the more jagged wing edges. 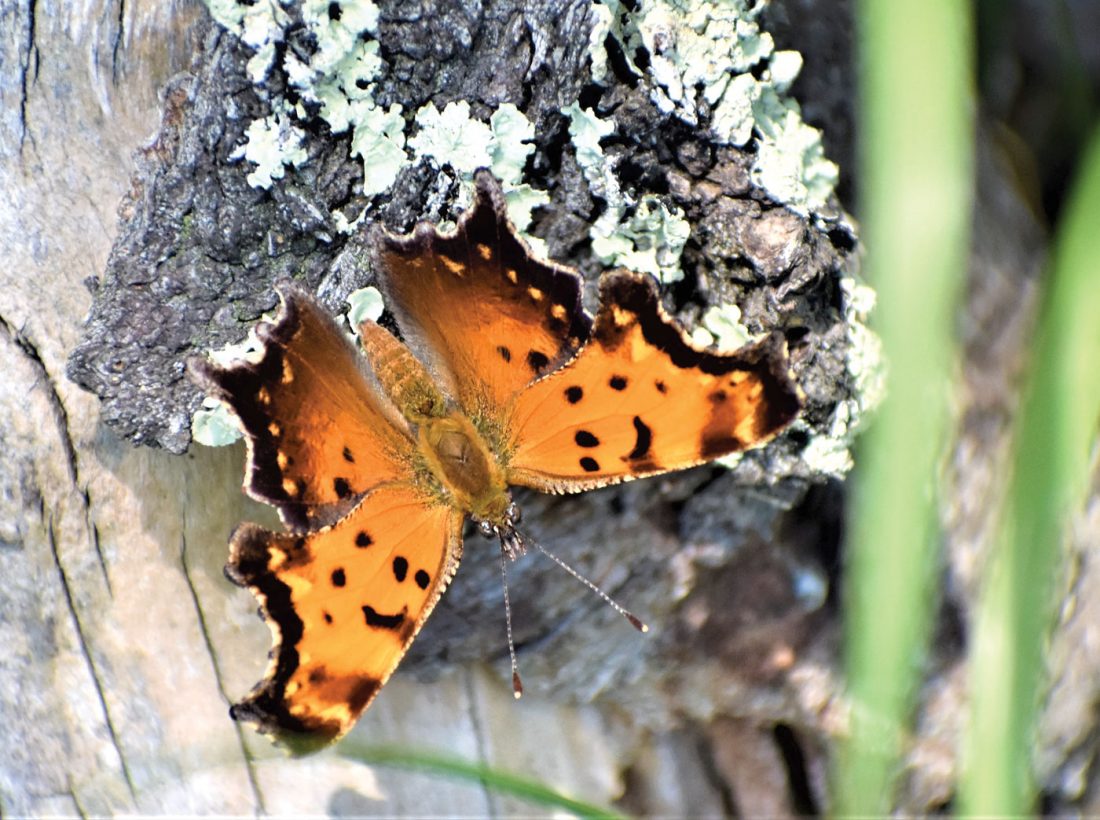 — Milbert’s tortoiseshell: Perhaps the only upside to having a patch of stinging nettles in the yard is potentially getting an abundance of these spectacular butterflies. It is medium-sized, with what I would describe as a sunset over hills and the flaming Eye of Sauron — if not a “Lord of the Rings” fan, look it up — on each wing. As indicated, Milbert’s tortoiseshell uses stinging nettles as its host plant, with the caterpillars forming clusters as they feed and develop. The species usually has two or more broods in a season, with the last group overwintering as adults. The area also has Compton’s tortoiseshell — not as boldly marked as the Milbert’s and more like the “tortoiseshell” pattern from which it got its name.

— Mourning cloak: This often is the first butterfly to appear in the spring, flying even as snow might still remain. New mourning cloak butterflies emerge in July, remain through the summer and fall, then find a crack in wood or rocks to tuck away and hibernate for the winter. But they then will continue into June, meaning they last almost a year, a long lifespan for a butterfly. They also favor tree sap rather than flowers for feeding. Like the swallowtail, it will use a wide variety of host plants, including willow, hackberry, hawthorn, wild rose and poplar.

— Northern pearly-eye: This is one of the satyrs, a group of somewhat drab brown or tan butterflies, most of them marked with prominent eye spots. They favor woodlands and forests rather than open areas. The wood nymph from this family is thought to be the most common butterfly in Wisconsin, according to the Wisconsin Butterflies website, https://wisconsinbutterflies.org.

— Crescents: These are smaller orange and black butterflies that seem to be out in some abundance this year. There are a number of different crescents, such as the northern and pearly, that can occur here, and it’s beyond my level of expertise to detail how to tell them apart. Instead, if curious about this or any other variety, I’d suggest the Wisconsin Butterflies website listed above for high-quality photos and descriptions of each species, its normal range and flight period. 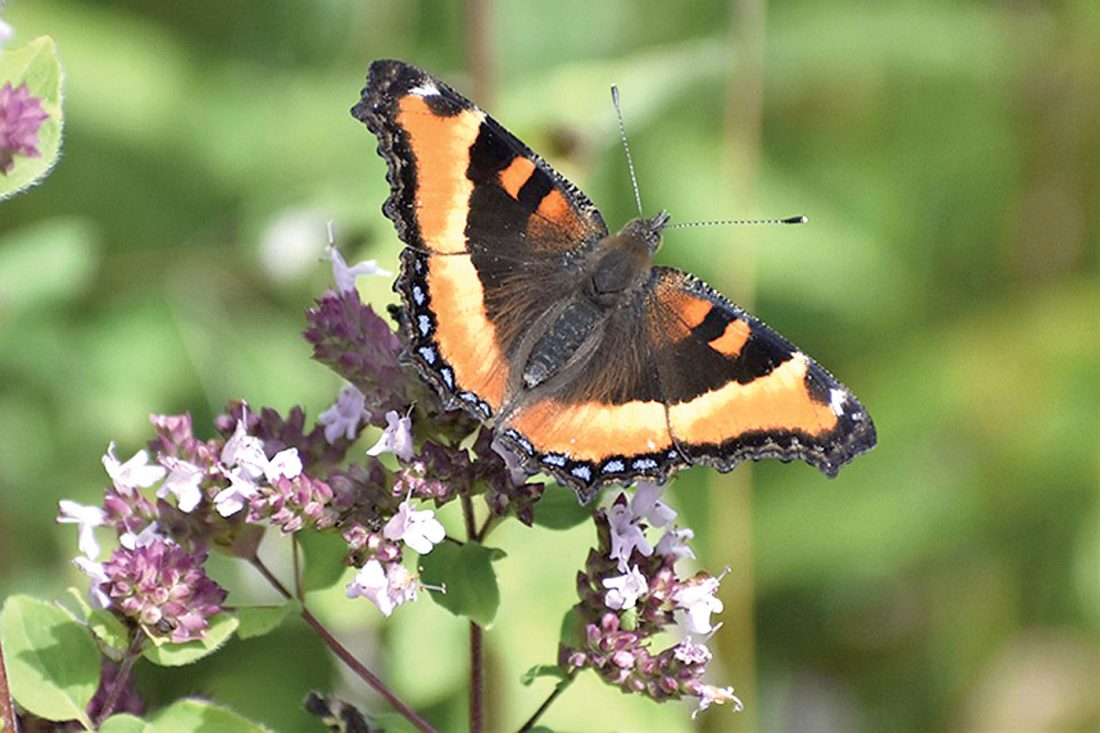 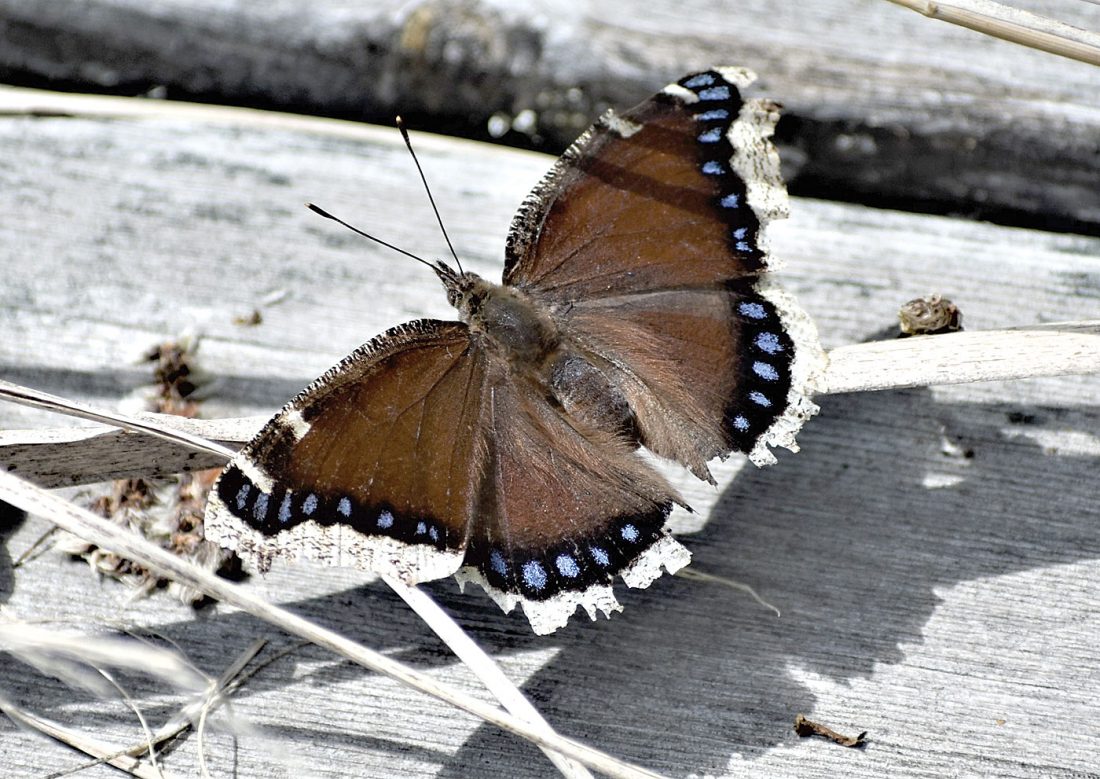 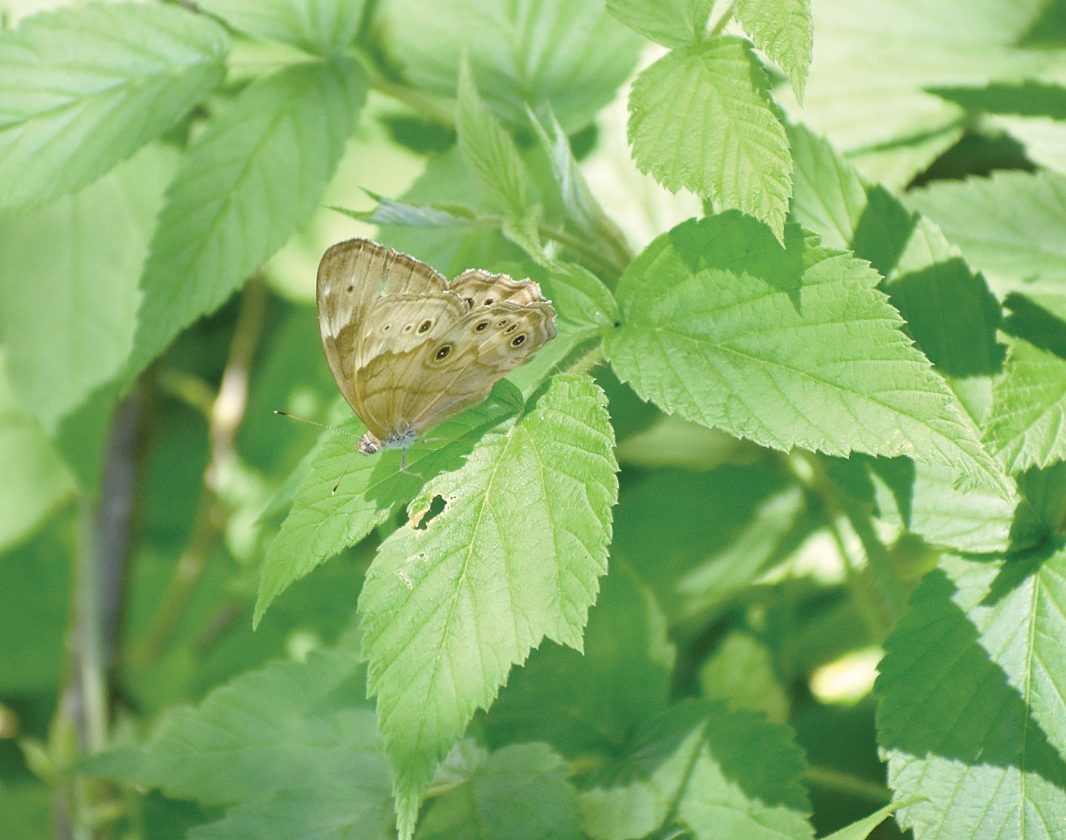 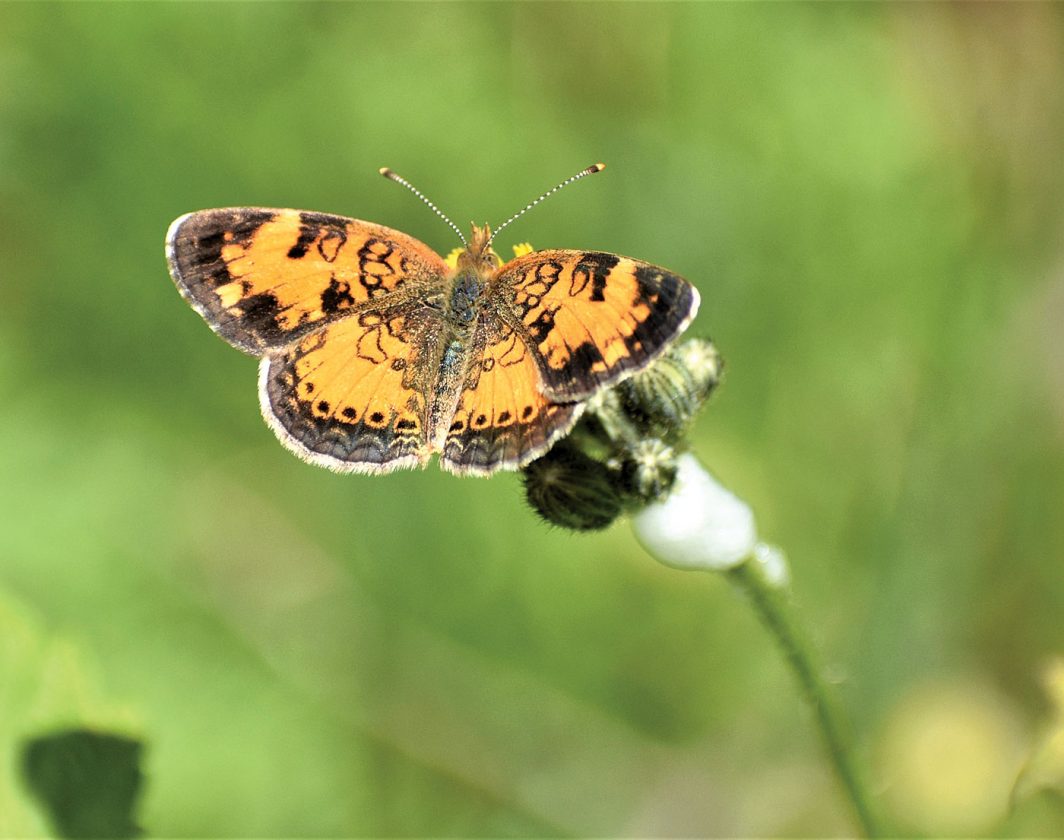