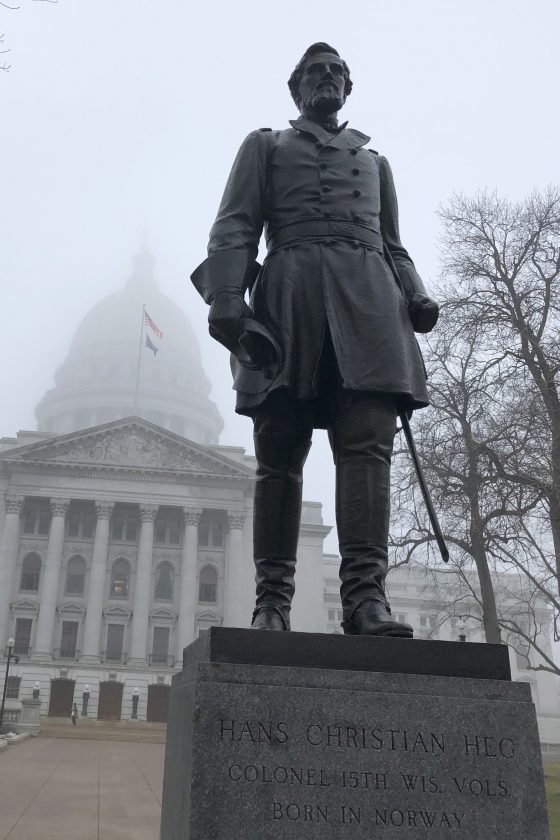 A statue of Civil War hero Hans Christian Heg is seen on March 11, 2020, outside the Wisconsin state Capitol, in Madison, Wis. The Wisconsin abolitionist's descendants are imploring state officials to repair and reinstall the man's statue outside the state Capitol after demonstrators ripped it down during a wild night of protests against police racism last month. (AP Photo/Scott Bauer)

MADISON, Wis. (AP) — A Wisconsin abolitionist’s descendants are imploring state officials to repair and reinstall the man’s statue outside the state Capitol after demonstrators ripped it down during a wild night of protests against police racism last month.

Col. Hans Christian Heg’s great-great grandson, James Heg, said in a telephone interview Monday from his home in Chelan, Washington, that Heg has inspired his family for generations and that watching the statue go down was a “gut punch.”

“It was a really shocking event … because it was an attack on a direct ancestor and it was one of the most senseless things I’ve heard of,” he said. “He wasn’t tainted by any of the historical evils people are protesting about. He in fact died for the cause of destroying slavery.”

Hans Christian Heg’s other great-great grandson, Christopher Heg, said in a telephone interview from his home in Seattle on Monday that tearing down the statue was a “dumb thing to do.”

“It was thoughtless,” he said. “He was a very dedicated abolitionist himself and he would have in general supported the (Black Lives Matter) initiative.”

Hans Christian Heg was a Norwegian immigrant who became an outspoken abolitionist and served in the 15th Wisconsin Regiment during the Civil War. He was killed at the Battle of Chickamauga in 1863, becoming the highest-ranking Wisconsin soldier killed in combat during the war. A statue of him, funded by donations from the Norwegian Society of America, had stood outside the Capitol since 1926.

Protesters tore the statue down, ripped its head off and dumped it into a nearby lake during a violent demonstration June 23. They also tore down a statue on the other side of the Capitol embodying the state’s “Forward” motto as a woman pointing toward the horizon.

The protest was another in a series of demonstrations that rocked Madison’s downtown in the weeks after George Floyd’s death in police custody in Minneapolis.

Questions about why the protesters toppled two statues with no racist history linger.